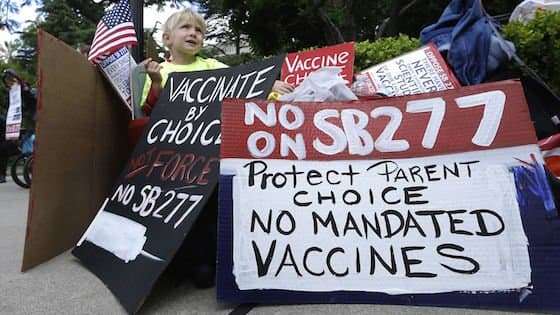 Vaccine mandates have been affecting the entire world, and touching almost every modern industry. Entertainment is not different as major movie and TV productions are dealing with challenges by many actors refusing to take the medical procedure. Recent examples in Hollywood include Ice Cube dropping out of the Jack Black comedy Oh Hell No because he didn’t want to comply with the vaccine mandate, and Black Panther actress Leticia Wright speaking up against the mandates.

Even legendary actor Robert De Niro suspects vaccines caused his son to be autistic and he has actively promoted mandate speakers and movies like ‘Vaxxed.’ Comedian Rob Schneider recently stated on Twitter: “Just say no… And keep saying no… More than half of the US population continues to say no to this unapproved experimental gene therapy! My body, my choice.”

Broadway star Laura Osnes left the cast of Crazy For You, a show set for late August 2021, because she refused to receive the coronavirus vaccine. Most recently, Marvel Studios’ actress Evangeline Lilly recently attended an anti-mandate rally, and was spotted slamming those mandates on social media. The 43-year-old actress announced that she was personally in attendance at a rally in Washington, D.C., to protest the vaccine mandates on Sunday.

The actress added: “This is not the way. This is not safe. This is not healthy. This is not love. I understand the world is in fear, but I don’t believe that answering fear with force will fix our problems. I was pro choice before COVID and I am still pro choice today.” However, these opinions are considered by some to be controversial given the cultural divide among the general public about the Covid-19 vaccines.

Marvel actress is against vaccine mandates?

This movement is not only happening Hollywood. The music industry is seeing many artists speaking up too, and several concert venues are having to cancel shows because certain entertainers have decided they would refuse to play at venues with any kind of mandates.

Metallica’s vocalist James Hetfield have announced the band may decide to cancel gigs if festivals and concert venues impose COVID-19 regulations. Hetfield is one among a group of celebrities who disagree with strict vaccination requirements or dismiss the coronavirus vaccine altogether. The singer expressed his concerns about the COVID vaccine [via Blabbermouth]: “I’m a little skeptical of getting the vaccine, but it seems to be rolling out and people are getting it and I’ve got lots of friends that have done it — I’m not totally sure about it. But I hope it doesn’t come to a point where you have to have that COVID stamp in your passport or something to go everywhere. But if it comes down to that, then I’ll make a decision then.” 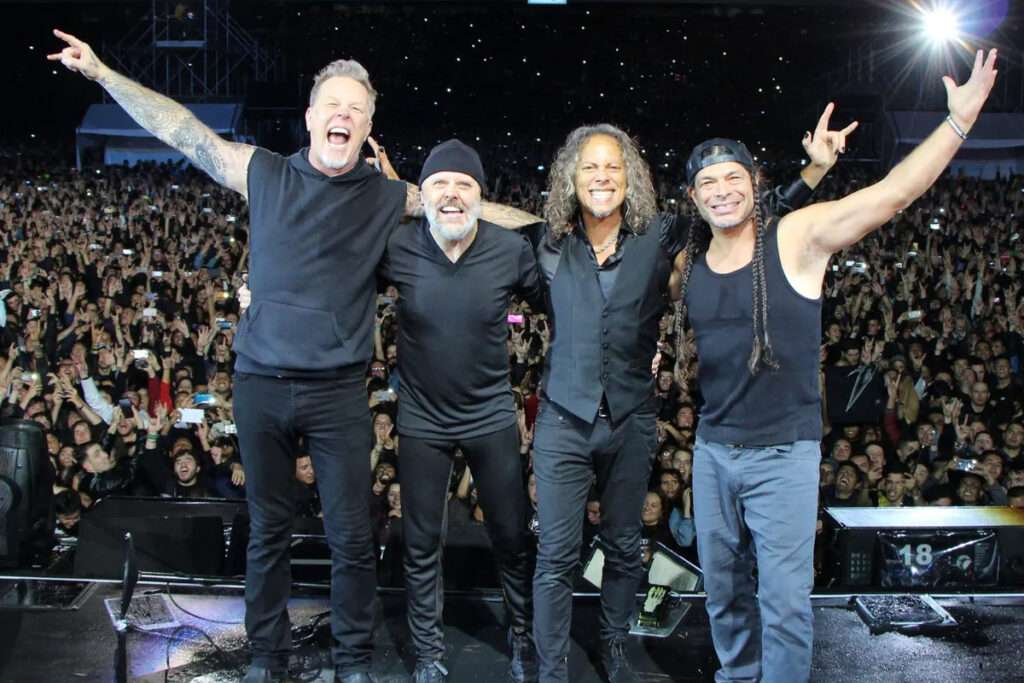 As we’ve reported before, legendary guitarist Eric Clapton has spoken up about venues asking for vaccine passports on entry. In fact, and is outright refusing to play concerts at such venues. His reasoning? He experienced a “severe” reaction to the AstraZeneca vaccine and doesn’t think it should be a criteria. Clapton wants equal access and inclusion for unvaccinated people. “I will not perform on any stage where there is a discriminated audience present,” he said. “Unless there is provision made for all people to attend, I reserve the right to cancel the show.”

Pete Parada, drummer of Offspring, saw himself forced to leave the band because he would not get a second dose of the vaccine. He wrote on Instagram that he’s “unable to comply with what is increasingly becoming an industry mandate,” namely being vaccinated to enter a concert hall or club.

But not every artists agrees. And this divide is now moving from the concert halls to streaming. Just last week, 76-year-old Neil Young demanded streaming platform Spotify remove comedian Joe Rogan’s popular podcast for what he said was sharing “misinformation” about COVID-19. Young threatened he would demand his music be removed from the platform if they didn’t. Other musicians like Joni Mitchell joined Young in his demands for Spotify to censor Rogan. 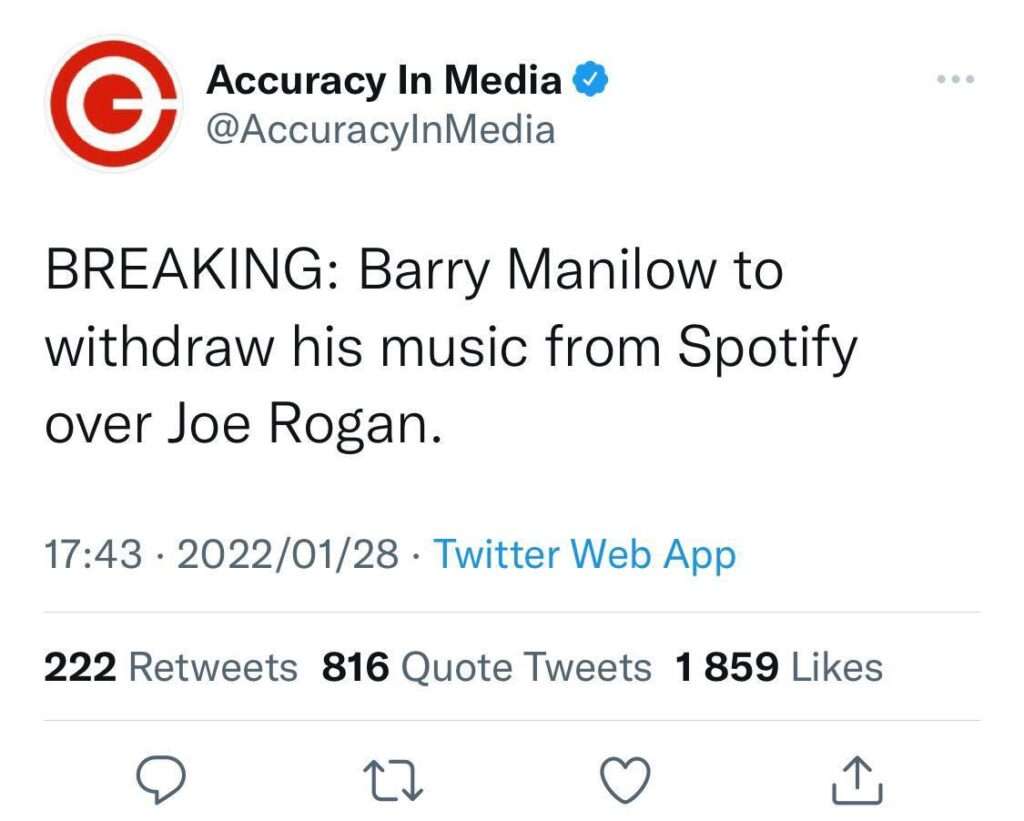 Thank you @barrymanilow for taking a surefooted step to support science, and protest potentially lethal misinformation disseminated by @Spotify via #JoeRogan. Over 800,000 Americans have DIED in 2 years. LIVES must come before revenue. #Spotifydeleted

Wow that’s disappointing. I thought you were doing the standup thing and standing by Neil Young. But since you’re not, I’ll not only boycott Spotify, I’ll boycott you too.

Other popular entertainers have joined the fray.  Comedic actors like the formerly edgy Sacha Baron Cohen has made it his mission to fight “misinformation” on social media, with Facebook as his number one target. And now, as reported by Hollywood in Toto, even Howard Stern, the once courageous shock jock, joins with the likes of Arnold Schwarzenegger, and openly agrees with guys like Neil Young, and wants Spotify to censor Rogan.

COVID-19 broke what remained of the old Howard Stern. He no longer broadcasts from his studio, preferring to work from home like so many blue state teachers. The lean, and healthy, talker sounds deathly afraid of the pandemic, despite taking all the available inoculations to stave off hospitalization or death.

He isn’t taking kindly to those who put the virus’ risks in perspective.

“F— them. F— their freedom. I want my freedom to live,” Stern lashed out late last year, channeling a certain Governator.

He rages against athletes who question vaccine mandates, ignoring science suggesting they’d get the virus anyway and would be good as new within days.

Fellow liberal and comedian Jimmy Dore recently appeared on FOX News as a guest on the Tucker Carlson program to excoriate Stern as an embarrassment and disappointment.

Howard Stern used to be incredibly brave and courageous. But now, he’s become a coward. pic.twitter.com/HL3E0wMx9S

No matter where you land on the vaccine debate, it’s clear that new lines are being drawn, with political loyalties being tested and ignored, this debate isn’t going away anytime soon. How long and how extensively it will effect popular culture and entertainment is anyone’s guess.