In what’s been described by some as a “bloodbath” and others as a “needed purge,” Marvel Comics has finally put a slew of titles (and readers) out of their misery by (unofficially) cancelling several titles which will occur over the next couple of months. Titles affected are Defenders, Luke Cage, America (Chavez), Gwenpool, Generation X, (Kate Bishop) Hawkeye, and Iceman. Most of these appeared to be canceled in light of their absence in the recently released March comic solicitations from Marvel.

However some titles were only confirmed cancelled when creators spoke up on social media. Iceman writer Sina Grace confirmed the title’s cancellation on his Twitter announcing that March’s Iceman #11 will be it’s last.

In his response to fans, Grace oddly appears to blame the comic instead of taking some of the responsibility for its failure himself. It even appears that he wishes the fans to try to save his book with a campaign even though it couldn’t support itself. The title launched in June with the first issue only selling only 34,202 copies and has lost over 63% of it’s readership in 7 issues with the recent issue from November only moving 12,677 copies.

Read his handwritten letter below where Sina also mentions that this won’t be the end of his work at Marvel:

Another casualty of “the purge” announced on Twitter was the Kate Bishop version of Hawkeye. Writer Kelly Thompson confirmed that the book ends after March.

Yeah, as some of you are guessing from that cover, #16 will be our last issue of #Hawkeye. Obviously I’m disappointed, but I’m really proud of our book & 16 issues is a solid number in modern times. And there’s maybe something interesting coming next? We’ll see! 😉 💜🏹 https://t.co/TDl849G6Kp

Hawkeye only sold 12,113 copies last month and had been losing an average of 10% or more in sales from each previous month. Other titles, such as David F. Walker’s take on Luke Cage was also selling under 12,000 copies a month. It got a nice bump in sales via incentive ordering during the October Legacy month where it sold just over 39,000 copies, but the month before it only sold 11,150 copies and was losing an average of 10% per month.  This pattern seems to remain the consistent with each of the other titles being cancelled as well. Even Entertainment Weekly’s “Superhero of the Year (2017)” America Chavez couldn’t escape death by low sales numbers. It only sold 8,360 copies last month with issue #9, which is an 81% drop from it’s first issue.

However, some people are claiming that Marvel, and by extension their Editor-In-Chief C.B. Cebulski, who is not new to controversy, are anti-identity politics or are purposely targeting people-of-color and LGBTQ+ characters.

Still curious who at @Marvel thinks it’s a good look to hire a new white dude EIC who pretended to be Asian to write comics and then immediately cancel books featuring women, PoC, and LGBTQA+ leads.

But you understand that for audiences who are queer, POC, women etc, that that visibility is AS important as good content too?

It’s all well & good to promise a commitment to great stories etc, but if that involves 50 books about straight white guys, that in itself is an issue

The fact that all these titles have a female lead, a POC lead, an LGBTQ lead, or some combo thereof, and are all getting canceled is… Not a great look.

No comment whatsoever from that faction on the abysmally low sales of all of the titles being cancelled. Could all the low sales be blamed on bigotry? Or might there be more to it than that? Such as poor writing or ugly fan interaction by some creators? Joe Quesada was pushing-back against an angry minority of Twitter users who refused to accept that Marvel wasn’t engaging in bigotry.

Sorry you feel that way but like it or not Marvel is a business. We keep titles going for as long as we can but there are times, regardless of who the character is that we need to shut it down. Unfortunately we can’t make every fan happy with these decisions. https://t.co/5UaqLNC50j

Again, these are incredible generalizations on your part like the one about me being disingenuous. At some point in our lives all of us have had our favorite title canceled. https://t.co/9ni5L0yl8v

Additionally, the solicit for Amazing Spider-Man #797 seems to indicate that the seven-year tenure of Dan Slott on the series may be coming to an end too. The book didn’t even crack the top 20 this month, coming in at rank #23 with 56,179 copies sold. It’s seen worse in recent years, but that’s nearly half the 110,349 copies it moved last month with issue #789 (Legacy numbering) and a 5% drop from issue #32 in September. Those variant sales gimmicks can’t last forever. Even Peter Parker the Spectacular Spider-Man and Amazing Spider-Man Renew Your Vows outsold the main title.

For what it’s worth, but it bears mentioning that none of this has anything to do with Jim Starlin also announcing his work at Marvel is done and that he is “moving on” after an editorial dispute with Tom Brevoort.

Looks like the shake-up that started with Brian Bendis leaving for DC last month continues. Is C.B. Cebulski capable of “making Marvel great again”? Getting rid of dead-weight in the form of under-performing titles is definitely a start in the right direction. 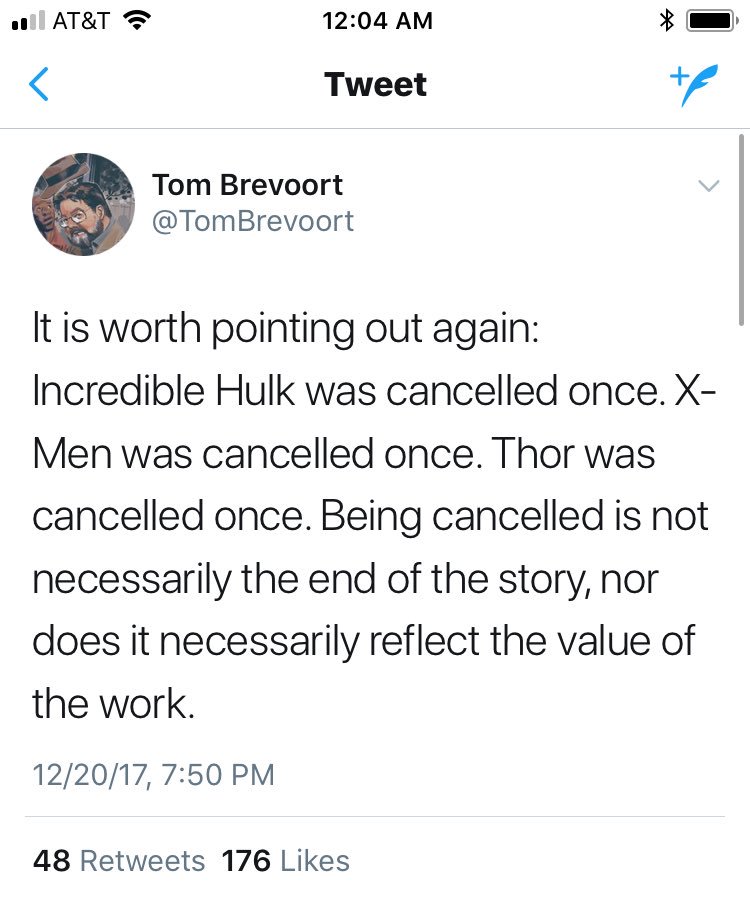 For a more thorough examination of the comic sales numbers for the big two, check out our recent article on the candidates for cancellation here.