Wakanda Forever, the upcoming Black Panther sequel scheduled to hit cinemas in November, will mark the debut of one of Marvel’s first published mutants, Namor the Sub-Mariner. The popular character will be portrayed by Tenoch Huerta in the MCU sequel.

The San Diego Comic-Con 2022 trailer for Black Panther 2 gave fans their first official look at Namor, providing the MCU with a new antihero. However, many long time fans of Namor were put off by the character’s Atlantan heritage being changed in the MCU to one more aligned with Aztec culture. The narrative is that Marvel did this mostly to avoid Aquaman parallels, but others are promoting the move as a way to bring even more “representation” to the Marvel Cinematic Universe’s cast of characters.

The MCU is not only retconning Namor’s history and altering his Caucasian appearance from the comics, but they’re also allowing an actor without the traditional muscular physique that is possessed by many of the MCU’s other prominent male heroes. In what appears to be a promotion of body positivity, Tenoch Huerta is not nearly as buff as the original character regularly appears in the comics, but isn’t even as fit as most of the other actors who have physically trained to play the roles of superheroes, such as Chris Hemsworth as Thor, Chris Evans as Captain America, and Chris Pratt as Star Lord.

Now one long-time artist for Marvel Comics, who has illustrated Namor numerous times, is speaking up, not to object to the retcon of the character’s origins, but to ridicule the physique of the actor playing the swimming anti-hero. Mike Deodato, Jr., a Marvel Comics artist, criticized Tenoch Huerta’s portrayal of Namor the Sub-Mariner in Black Panther: Wakanda Forever on his Instagram, in a now deleted post (seen above). Comparing his own physique to Huerta’s, Deodato, Jr. posted a photo of Huerta from the movie’s first teaser with a full-body photograph of himself with the caption “You can tell somebody screwed things up when a character from a movie looks in worst shape than the 60 years old artist who drew him.” He also added the statement, “Pencil lifting beats swimming anytime!”

Deodato has drawn Namor for many years with Marvel Comics, so he is quite knowledgeable about how the character has been portrayed in the media. In 2013, one of these tales even happened to coincide with Namor’s grudge and ongoing conflict with Wakanda, which will likely be depicted on the big screen in the Black Panther prequel.

But Disney shill media outlet The Direct was quick to defend Marvel Studios’ decision to soften and alter Namor:

While Marvel Studios is bringing a new level of representation culturally with Tenoch Huerta, Black Panther 2 is also giving fans a hero that looks a little different figure-wise from people like the MCU’s Chris trio (Hemsworth, Evans, and Pratt). It’s somewhat unfortunate seeing this kind of commentary in the public eye, even with Deodato’s history of working on Namor in the comics, but the hope is that his physique won’t matter if the character is done the right way.

[…] It’s certainly not ideal to see this kind of commentary from any source, much less an artist who spent years working on the character, as Huerta joins a top-notch franchise while playing one of the story’s most anticipated new heroes.

[…]There’s no question that he’ll bring the physical prowess needed to excel in the role, and six-pack or not, he’s sure to make his presence felt in likely the first of many MCU projects.

This mediocre take by Richard Nebens of The Direct was enough to inspire soy-infused “gnashing of teeth” by MCU defenders who attacked the long-time comics creator who knew first hand how Namor’s appearance should be presented. 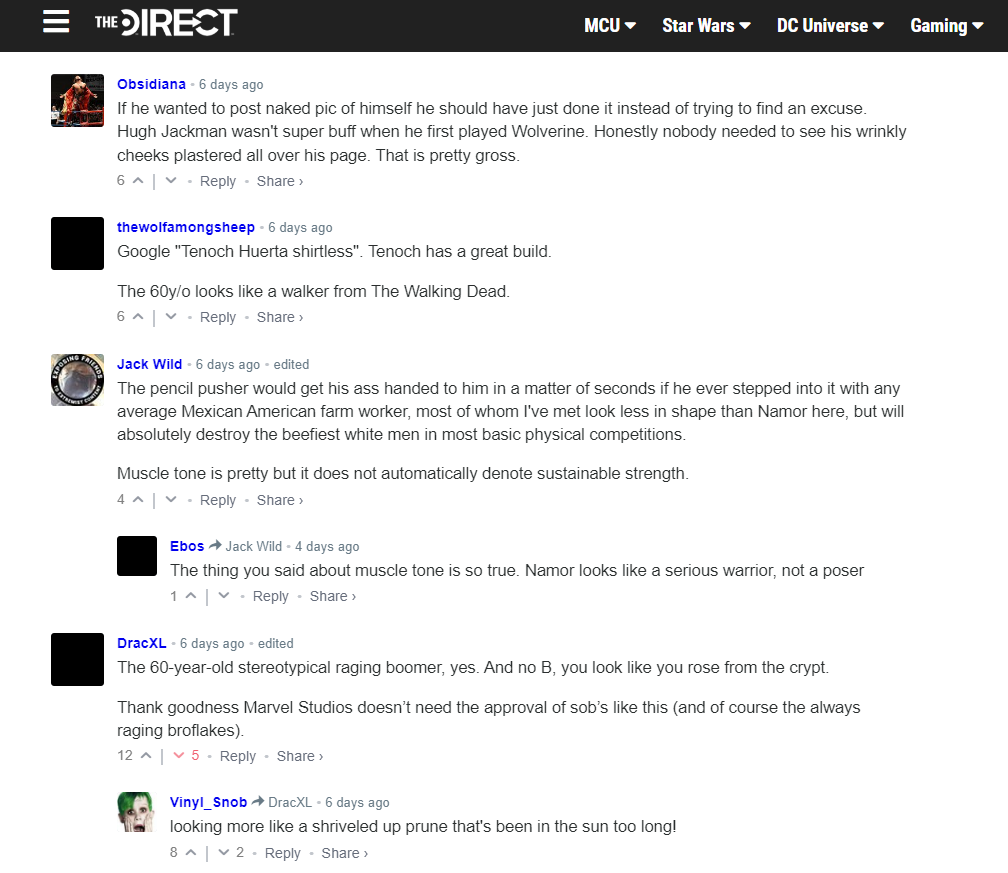 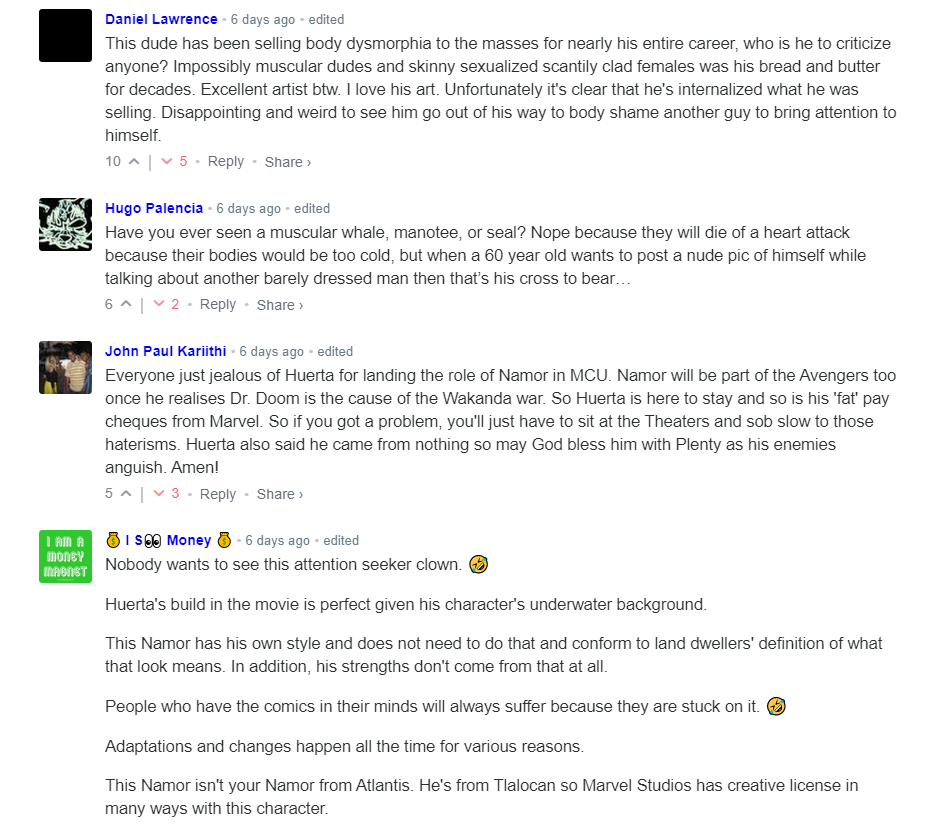 And it just goes on and on and on like this, with lots of upvotes for the Disney Defender Brigade, and plenty of downvotes on any commenters who think Deodato is entitled to comment on something that he is inarguably uniquely qualified to criticize.

Feel free to browse the clownshow comments yourself here.