‘King of the Hill’ Revival Won’t be Happening at FOX 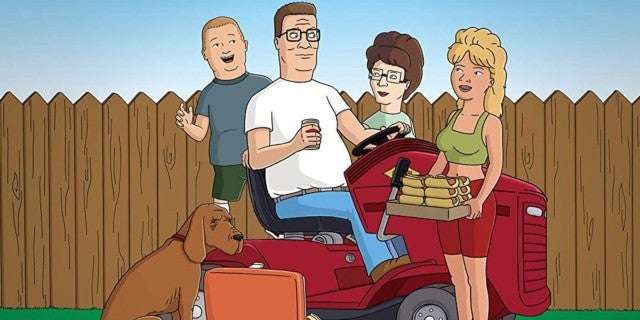 Rumors and murmurs of a FOX revival of King of the Hill began as early as January of this year. And then back in July, co-creator Mike Judge assured fans at San Diego Comic-Con that King of the Hill had “a very high chance of coming back,” the potential resurrection seemed to have received its most encouraging update to date. That came after writer-producer Brent Forrester had hinted that a reboot of the series that would start up 15 years after the original was in “hot negotiations.”

But FOX passed on the revival, it has now been made known. According to THR, Fox Entertainment President Michael Thorn confirmed the story and made it plain that if the show is revived, it won’t be at its previous network.

Hollywood Reporter got a statement from Fox Entertainment president Michael Thorn, who made it clear that if the series gets a revival, it won’t be at its former home.

“That’s not going to be with FOX. We love that team, and we love that show. It’s obviously part of our animation legacy. But we’re we’re really focusing on animation is launching the kind of the next wave of our signature animated series, while still having our great legacy shows.”

Of course with Disney owning 20th Century, it’s easy to understand why the show won’t be coming back to Fox. Disney is far more committed to focusing on new shows where it can have more independent ownership and include drag queens and other child grooming subject matter. With King of the Hill, that’s not an option, which took plans for the revival off the table.

“We’re really focused on what are the new shows that we believe can creatively break out, that we also have a significant ownership stake in, and if not outright own 100 percent of it. And on a show like King of the Hill, which we love, there’s really no opportunity for us to have an ownership stake in that show. It’s not a move that we can make as we grow out our next wave of animation, where ownership is so, so crucial to the long-running success of these series.”

There is still some hope for the revival, as there’s always the chance another network or streaming service will land the rights to a new King of the Hill series. After all, the new Beavis and Butt-Head revival was picked up by Paramount+ after originally being announced for Comedy Central. There’s still hope for a King of the Hill revival, but this is a set-back for sure.

King of the Hill’s 13 seasons are currently available to stream on Hulu.