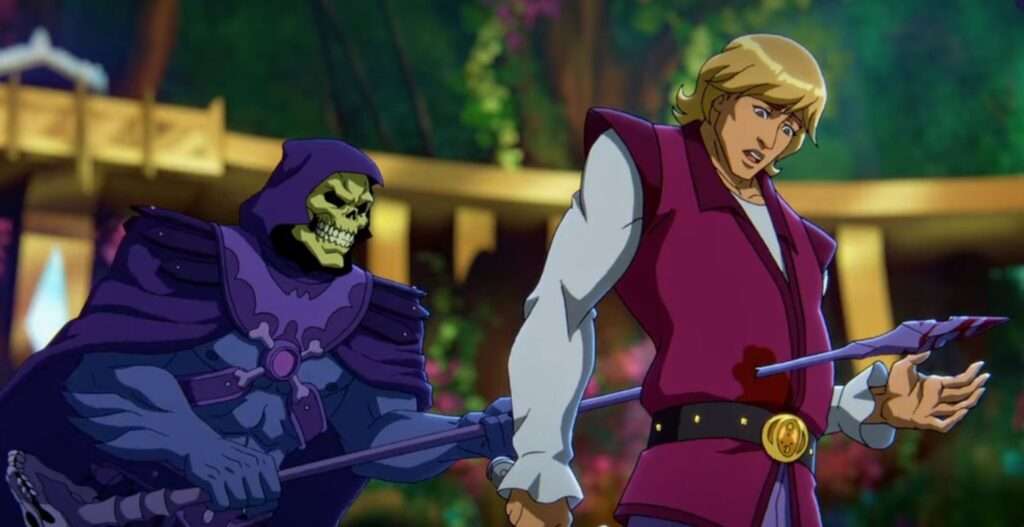 Fans of classic toons have been consuming a lot of recent so-so reboots like Duck Tales and abominations like Thundercats Roar! or the dramatically altered She-Ra. So much so that it appears that crappy reboots are unavoidable. And with the desire to make so many modifications to earlier properties, producers regularly lose sight of what made them popular in the first place. As Kevin Smith, is discovering, reimagining a beloved franchise like He-Man is one thing, but if it’s drastically altered from how the fans remember, it’ll never satisfy those who wanted to return to the property they once loved.

Masters of the Universe: Revelation has arrived on Netflix, and the Rotten Tomatoes judgement is as diametrically opposed as He-Man and Skeletor themselves. While professional reviewers lauded the reimagining, audience evaluations on Rotten Tomatoes and social media utterly panned the show. The few critics that have bothered to weigh in have been giving gushing reviews to the tune of a 97% approval rating, but an overwhelming barrage of negative viewer evaluations has left the show with an almost knock-out blow of 28%, presumably coming primarily from fans of the original ’80s animated series.

But what could have triggered such a reaction? Was it too woke as many presumed? Or is it simply that He-Man is killed not just once, but twice in the five episode series, Orko is also killed off, but then there’s Teela. 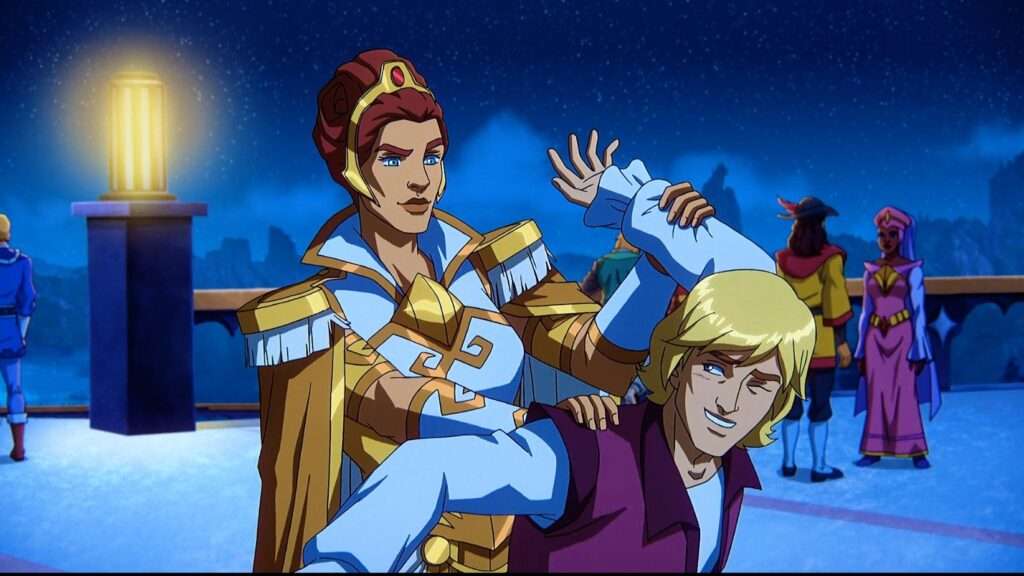 Kevin Smith, who has received as much personal criticism as fans have given Master of the Universe: Revelation, claimed in interview after interview that this was definitely a He-Man show, and a continuation of the storyline from the original series, and in no way was he about to make it into “The Teela Show,” but it appears that he may have been more than a little loose with the truth in the eyes of many fans. While some have suggested that the “manbabies” and “dudebros” are getting upset by their favorite male hero being forced to spend a lot of screen time with Teela, those with open minds who have seen the  episodes note that He-Man isn’t just sidelined, he’s killed on the first episode and Teela takes over from there.

Oh yeah. You tell ‘em! School those man-babies! I’m a woman and i’m fucking disappointed in the show.

Look, Kevin said it was just like the original.
He also said Heman wasn’t sidelined.
He lied about the whole thing.
So yea people are a little upset.
“It’s just like the show you remember”
But it’s not.
Thats the facts and it’s the Bottom line.

So how unlikeable did Smith write Teela in Revelation? Well she actually shames Adam for the audacity of dying and depriving her of the ability to yell at him for keeping the He-Man secret from her.#MOTU #MotuRevelation #ClownfishTVWasRight pic.twitter.com/AMC0CuY1wU

Why is He-Man front and center on all that stuff? #KevinSmithLied https://t.co/AeumIIhf4f

*Masters of the Universe Spoiler Warning*

Ok, so He-Man is dead? If you’re going to make a show that plays on nostalgia, maybe start with not killing the most recognizable and nostalgic character?

Masters of the Universe Revelations fails the Bechdel test because even after He-Man and Skeletor are gone Teela and Evil Lynn keep going on about them. Also they could have had more power if it weren’t for those pesky men.

Kevin Smith owes ClownfishTV an apology. There’s no hiding it now. People have seen he lied about *everything* he called them liars over.

Missing? He was dead. Then they brought him back with Skeletor. Then only to have Skeletor kill He-Man yet again and claim Grey-Skull. But sure then show is all about He-Man. pic.twitter.com/0IYdTJxAlv

The original series was titled He-Man and The Masters of the Universe, however the new series does not include the name He-Man. What cannot be refuted is that Smith has spent the better part of the last month stating that this was a continuation of He-Man’s plot. Maybe it’s just a matter of perception. Anyone who has seen the original knows that, while He-Man and Skeletor dominated the series, Teela, like Orko, had episodes that were mostly about her character. Perhaps the outcry would have been mitigated if Smith had managed to keep at least the first few of episodes focused on Eternia’s main muscle. 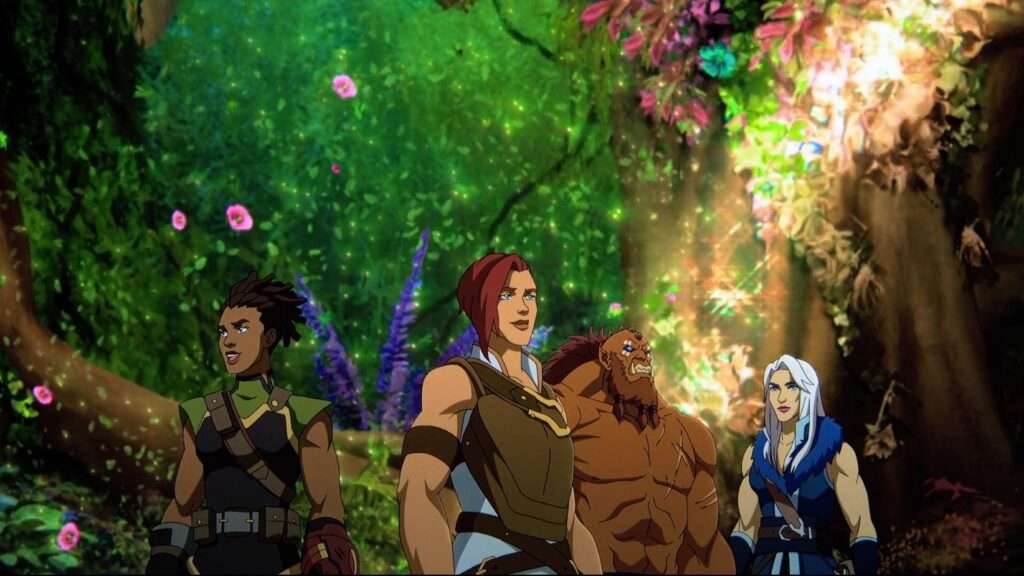 Announced in 2019, Masters of the Universe: Revelation was executive produced by Kevin Smith and was touted as a follow-up to the beloved 1980s cartoon. “Narratively our show is set up as the next episode in the legacy ’80s animated series that aired from 1983-1985,” Smith said during production. “This is a continuation of that story. We’re playing with the original mythology and characters, and revisiting and digging deeper into some of the unresolved storylines.” 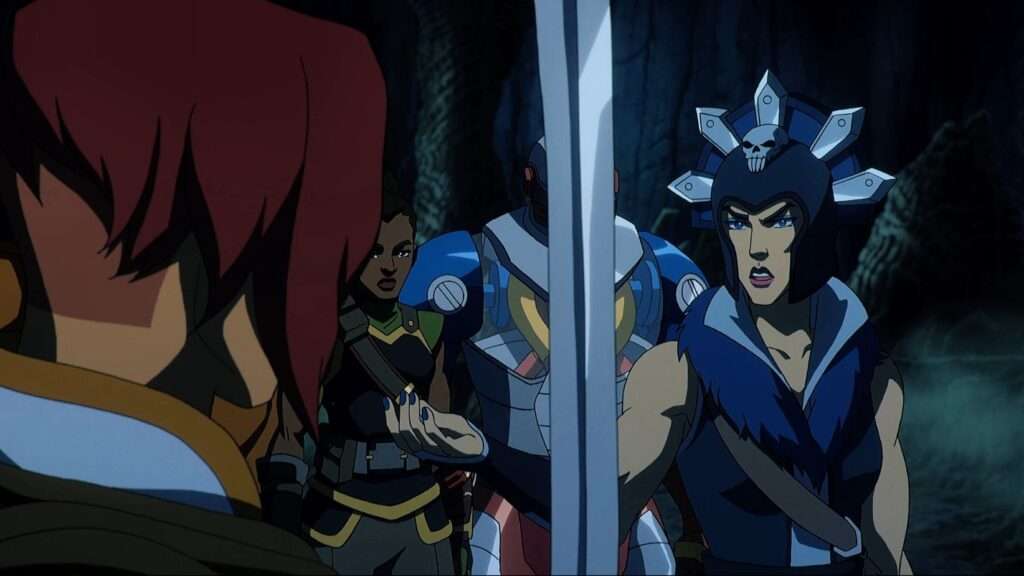 “I’m Eternia-ly grateful to Mattel TV and Netflix for entrusting me with not only the secrets of Grayskull, but also their entire Universe.” Smith said in an official statement. “In Revelation, we pick up right where the classic era left off to tell an epic tale of what may be the final battle between He-Man and Skeletor! Brought to life with the most metal character designs Powerhouse Animation can contain in the frame, this is the Masters of the Universe story you always wanted to see as a kid!” 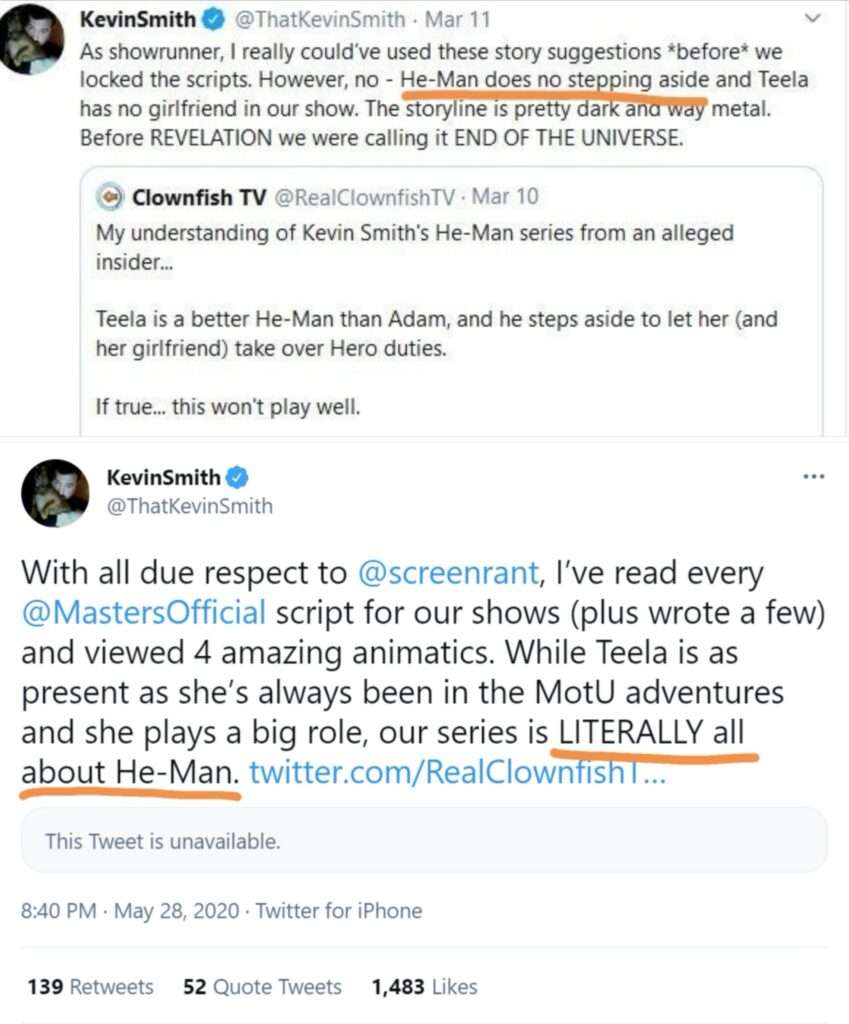 Definition of “literally” (adverb): in the strictest sense, without exaggeration or inaccuracy

Bottom line is that Kevin Smith did a bait and switch. Long time fans aren’t happy. Time for the mainstream press to queue the “review bomb” narrative. Will Kevin Smith apologize for implying  Clownfish TV were liars? He could’ve simply ignored them.

Also, @RealClownfishTV? Instead of posting your faux “insider” info, here’s a *real* story: @Mattel made a behind-the-scenes video featuring our actors recording. So a fan took some of Mark & Lena’s dialogue and spliced them into old Filmation clips. Look: https://t.co/941kHt8oNR https://t.co/b6jUBJxC0n

Grace Randolph of Behind the trailer notes that there seems to be a lot of “queer baiting” in the series, which disappointed her. So Teela was potentially set up to have a girlfriend, but she didn’t. Perhaps in part two.

Critical Drinker, on the other hand, gets right to the heart of the problem, and says it best.

It’s just one lie after another. https://t.co/eovnEOgAdR

Have you seen it yet? What did you think of the show? Let me know in the comments section below.