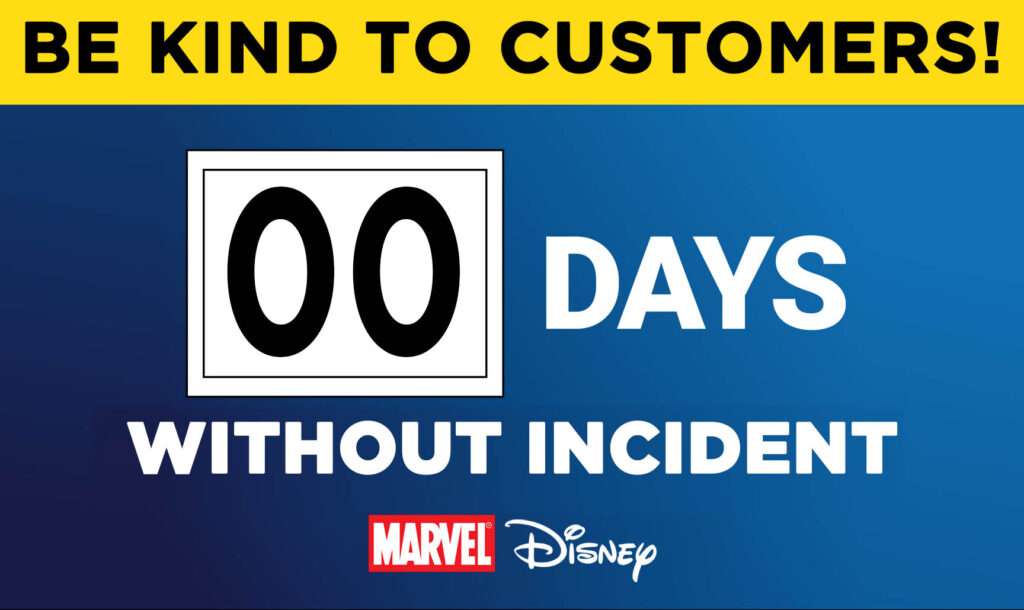 A few days ago, a comic book fan named Joshua Quirk had a bit of a run-in with Marvel Comics writer Dan Slott after responding to one of Dan’s political tweets. 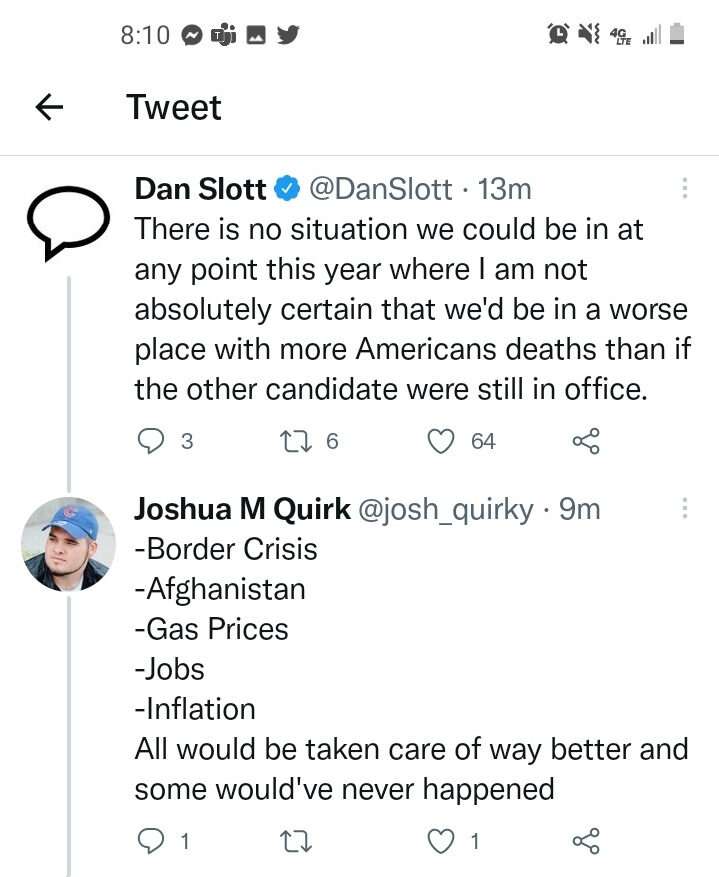 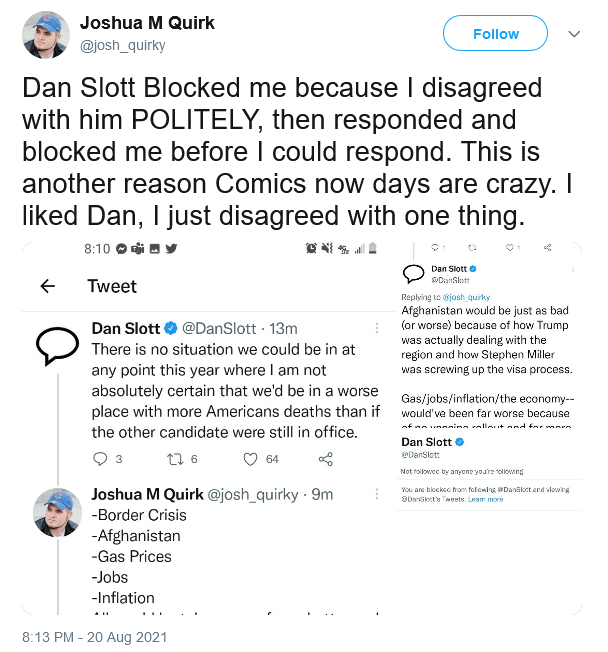 I blocked you because I checked who you were following.
And you are following a number of accounts that are members of an online hate group who have actively harassed people in the comic book industry who are from marginalized communities, including POC, LGBTQ+, & female creators

Joshua is an aspiring comic book writer, with a modest Youtube channel where he promotes current comics and chats with other creators about their creative process. He had been a long time fan of Dan Slott, but was shocked to see Slott policing his Twitter activity, and then being scolded by Slott for the crime of simply following several ComicsGate-affiliated accounts. 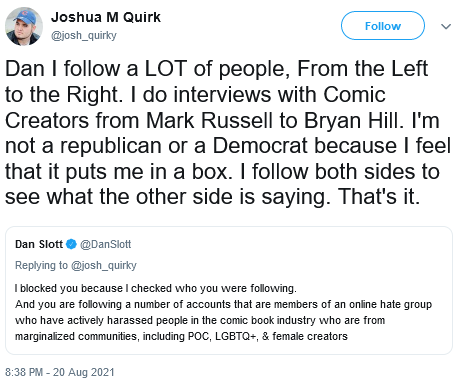 Bounding Into Comics first exposed Slott’s passive-aggressive attempt to impose this ideological purity test on Quirk, who was later invited to discuss his unhappy encounter with Slott on an August 24th livestream hosted on the YouTube channel I Love Comics.

Englentine, the host of the I Love Comics channel, has addressed this sort of regular harassment by comic book pros many times on his channel, and explains his own position on the matter in the description:

“A long time ago this channel was part of a group of comic book readers who saw their favorite characters being done wrong. Unwilling to listen, many comic book creators instead hurled insults and blocked those who would critique their comics and disagree with the direction they were going in. Now a new generation of readers are being attacked by those who disagree with those who write and draw comics.”

After Quirk’s appearance on “I Love Comics” where he  effectively defended Slott, the aspiring comic writer once again found himself in a struggle session with Mr. Slott over the fact that he had tweeted about his appearance on the channel, and the related Bounding Into Comics article. Quirk continued to defend his position, but the Fantastic Four writer only escalated his bullying, taking issue with Quirk’s public discussion of the incident and demanding through direct messages that Quirk delete any tweets associated with their disagreement.

Quirk then deleted the tweets in question that had upset Slott, but eventually realized he had been bullied (like so many other victims of Dan Slott’s abuse). That’s when he decided to speak up about it. This is what it looks like when a normal, non-political, mainstream comic book fan is exposed to the toxicity of today’s entitled, bitter, bullies in the professional comic book industry. Is Marvel Comics paying attention?

I shared @BoundingComics article about Dan Slott blocking me then talked about it on @Englentine live stream, Dan Slott then went into my DMs Cussed at and bullied me again. Not a big fan of Bounding Into Comics but Im seeing now what they have been talking about is true. pic.twitter.com/hrQ51aFsvq

Commentator Just Some Guy saw the dust-up and the results of Quirk acquiescence, and gave Slott and his supporters an earful.

Dan Slott: the Coward, the Bully, the Bigot

Wes Daugherity, an occasional contributor to Bleeding Fool, has a very good summary of the events that unfolded between Quirk and Slott.

Dan Slott’s never-ending “white knight crusade” against comicsgate-adjacent fans is one of the many problems in the industry that hurt the Marvel and Disney brand, but beyond that, it’s utterly destroyed Slott’s reputation. This is not the behavior of a professional. It’s the behavior of a bully. And much to the chagrin of anti-Comicsgate creators, the Whisper Network, and their allies, there’s ample available evidence that contradicts Slott’s spurious claims, even after partisan outlets like Inverse and the Mary Sue use dubious sources to support these sort of bigoted attacks on anyone that merely follows a comicsgate hashtag. Can any of those same outlets please explain why they ignore Dan’s marginalization of strong women and minorities that he disagrees with?

#DanSlott I am a Mexican woman who has been a fan of comics and video games since age 7. #COMICSGATE has been nothing but beautiful, supportive, kind and strong creatives. I hope you’ll wake up one day and realize this. Thank you @justsomeguycc for your video. #comics #comicbooks pic.twitter.com/5bXZNm3NvN

And Dan Slott isn’t alone, in fact there are several creators with similar dispositions such as Mark Waid, Bill Sienkiewicz, Nick Spencer, Tom King, and many others including top brass at Marvel like Joe Quesada who have regularly employed the very same bullying tactics against readers. These are the creators that are basically responsible for the birth of Comicsgate in the first place.

Ask yourself: If a comic “pro” like Dan Slott will harangue random readers in private over talking to VERY tactful guys like @Englentine, how many others have been contacted under the radar over the years? 🤔

And yet, it isn’t just readers and independent creators who align with the comicsgate philosophy, many former professionals like Chuck Dixon, Dale Keown, Dan Fraga, Ethan Van Sciver, Jon Malin, Shane Davis, Graham Nolan, and more have become vocally active in the comicsgate movement, pushing back on this sort of poor behavior, and rebuking the disrespect being shown to both the longtime readers and the legacy characters they cherish.

So if you’re still reading this and wondering what Comicsgate is, it’s probably best summarized as a culture war going on in the comic book industry that began when fans and readers got frustrated with the growing lack of professionalism, honest inclusivity, objectivity and accountability of the mainstream comic book publishers and their employees who were quite unprofessional when dealing directly with the critical customers (see also Dan Slott’s Twitter). A far more thorough explanation can be read at “What is ComicsGate?“

so #GamerGate is finally out. maybe #comicsgate #moviegate and #tvgate will be next. Actually, it’s just #entertainment #news #gate lol

Cosmic Book News’ Matt McGloin was already anticipating ComicsGate as early as October 2014, and even Rob Salkowitz writing at ICv2 noticed that the frustration was growing in comic fandom and outlined the damage to the comic book industry should a comicsgate culture war ever begin. Another of our frequent contributors, Avi Green also saw the brewing conflict of pros mistreating the DC and Marvel legacy characters and insulting long-time comicbook readers, and basically called for the movement back then as a way to hopefully persuade Marvel and DC to right the ship. It clearly didn’t work out that way.

To build a #comicsgate campaign correctly, solid, serviceable ideas are needed. Boycotting bad writers & editors is one way to do it

Unfortunately for what remains of American comic book readers, this culture war that’s been going on for at least seven years already is probably far from over. Will the American comic industry survive bullies like Dan Slott?