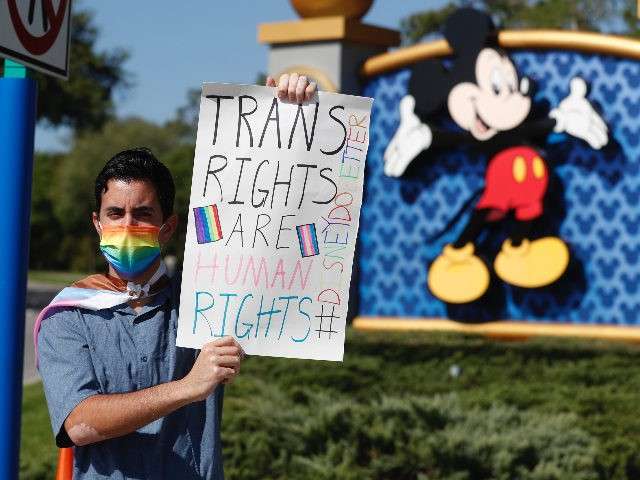 A group of conservative and religious Disney employees wrote a letter describing how the ostensibly “inclusive” company has made their workplace inhospitable to them, pushing many to leave and compelling these letter writers to remain anonymous in order to maintain their employment.

One of the employees, who works in the Imagineering department designing attractions in Disney theme parks, told The Daily Wire that he’s had three close colleagues leave his division in just the last nine months because of the increasingly hostile work environment.

“No matter what department or what segment, we’ve been watching the [diversity, equity, and inclusion] takeover of Disney accelerate to breakneck speeds, and God help you if you get caught standing in front of the train. […]

Over the last few weeks, we have watched as our leadership has expressed their condemnation for laws and policies we support. We have watched as our colleagues, convinced that no one in the company could possibly disagree with them, grow increasingly aggressive in their demands. They insist that TWDC [The Walt Disney Company] take a strong stance on not only this issue but other legislation and openly advocate for the punishment of employees who disagree with them…

Left-leaning cast members are free to promote their agenda and organize on company time using company resources. They call their fellow employees ‘bigots’ and pressure TWDC to use corporate influence to further their left-wing legislative goals.”

TWDC [The Walt Disney Company} has fostered an environment of fear that any employee who does not toe the line will be exposed and dismissed.

Much has been made of our internal efforts to Reimagine Tomorrow, but as much as diversity and inclusion are promoted, the tomorrow being reimagined doesn’t seem to have much room for religious or political conservatives within the company. Left-leaning cast members are free to promote their agenda and organize on company time using company resources. They call their fellow employees “bigots” and pressure TWDC to use corporate influence to further their left-wing legislative goals.

The full letter is available here, at least until Google censors it. As the Daily Wire reports, the open letter is “a last-ditch effort to appeal to senior leadership that may agree with us but lack the courage to say anything because they feel all alone themselves.”

In a surprising admission, it appears that some senior leadership is listening.

One high-level studio executive, who spoke to The Daily Wire on the condition of anonymity, said they, too, were concerned that the company is damaging its brand by abandoning the political neutrality that many hoped the more-conservative Bob Chapek would usher in when he replaced liberal Bob Iger as CEO.

At first, Chapek seemed to stick to that position when he issued a memo to employees saying that Disney would not publicly weigh in on Florida’s HB 1577, a law that prevents teachers from discussing sex and gender identity with children before the fourth grade without parents’ consent.

Instead, our source said, Chapek faced his own Disney “deep state” of leftover Iger hires intent on undermining that goal. They took to social media and leaked comments to Hollywood trade publications prompting Chapek to reverse course in a move the exec says was motivated by “cowardice and stupidity.”

“Now they’re not going to leave him alone. They will not stop,” the exec said. “So he really has two choices: Just castrate himself or stand up to them.”

The executive also revealed that Disney’s C-suite is aware of polling done by The Daily Wire that shows that 64 percent of Americans and 68 percent of parents support the “Parental Rights in Education” bill. They also know that a plurality of people say Disney’s stance against it will make them less likely to buy Disney products. But the exec says they’re more afraid of their employees than their consumers.

When asked if the company has any concern about the feelings of its conservative staffers, the executive told us, “The short answer is no.”

This was evidenced by a company-wide meeting Monday afternoon in which Disney leadership told employees that they are going on a “listening tour” in relation to the Florida bill. Leaders also announced during that meeting that the company is pledging to take action against an order from Texas Republican Governor Greg Abbott that bans medical transition for children. They said the company has signed a Human Rights Campaign petition opposing Abbott.

The anonymous employees maintain that Disney is more important as a business and a cultural institution when viewers across the political spectrum feel free to enjoy the entertainment it produces, citing “Hamilton” and “The Mandalorian” as unifying content. They are asking the public to join them in requesting that the company remain politically neutral, and not get into these political fights.

I asked #MoonKnight star Oscar Isaac if he had a comment about the Disney employee protest over the “Don’t Say Gay” bill today. Boy howdy, did he. https://t.co/pqyWy21r4n pic.twitter.com/JsO1NUtbdx

Meanwhile, other internal fights are happening in the C-Suite. Deadline recently reported several longtime Disney employees say Chapek’s handling of the situation led to “the worst week they’ve ever had working at the company.” And several “deep state” leftover loyalists to Iger have called him in recent weeks to express disappointment in Chapek. CNBC previously reported that Chapek met with creative leaders at Disney earlier this month to hear their concerns about his response to the bill.

Chapek also said at that meeting, that Disney leadership will be going on a “listening tour” of gay, transgender, and non-binary employees. No mention of a listening tour of parents or employees of faith.

Another anonymous employee described the presentations during that meeting as a “strategy session” for circumventing the will of mothers and fathers. “These activist employees and outside organizations recognize Disney’s cultural significance,” he said, “They want to use the company to make an end-run around parents through content creation and political pressure. They see it as their mission to rescue the next generation from their conservative parents.”

Disney’s new task group says it will seek specialists to produce a clear plan to guarantee Disney is a “force for good” for LGBTQ+ communities, particularly children and families, according to the business. No inclusion of Christians in that memo.

The Disney employee present at the meeting told us he walked away with one conclusion: “This is a complete institutional takeover. Disney is lost.”

Meanwhile, despite the communist country’s numerous human rights violations, ranging from the genocide of Uyghur Muslims in Xinjiang to ethnic cleansing in Tibet, to banning all entertainment content related to homosexuality, Disney continues to do plenty of business in China. The inmates are running the asylum at Disney. Don’t give money to people that hate you.