A lesbian kiss between two adolescent girls as depicted in a recent episode of Jurassic World Camp Cretaceous a children’s animated show, may be in violation of Hungary’s 2021 rule banning LGBT-themed content aimed at minors. Breitbart’s Europe news division is reporting that Hungary’s national media regulator has opened an investigation against streaming giant Netflix. The National Media and Communications Authority (NMHH) of Hungary is looking into Netflix following complaints from worried parents on the conservative petition website CitizenGo regarding the  Camp Cretaceous episode.

According to a report from the Magyar Nemzet national newspaper in Hungary, the series is marketed toward children as young as seven years old. During the ninth episode of the fifth season, a kiss between two teenage characters takes place and “to confirm the naturalness of the homosexual relationship, the young people’s family and friends also approve and support them in the story, saying how happy the two ‘girlfriends’ are together,” as the Hungarian paper relayed.

While this apparently breaches the Hungarian law prohibiting trans and other LGBT content aimed children, it remains to be seen if the NMHH will be able to take legal action against Netflix over the cartoon, as Netflix Hungary is actually registered in the Netherlands, meaning that the Hungarian media regulator may have to raise the issue with Dutch authorities for any action to take place.

Hungary, which is one of the most socially conservative member-states of the European Union, has faced backlash over the 2021 law prohibiting schools and media from promoting homosexual or transgender content to children from both Brussels and much of the establishment media in the West, which typically characterises the law as the “Hungarian anti-LGBT law”.

A government spokesman defended the legislation at the time, saying: “There are contents which children under a certain age can misunderstand and which may have a detrimental effect on their development at the given age, or which children simply cannot process, and which could therefore confuse their developing moral values or their image of themselves or the world.”

With a grand jury indicting Netflix in Texas in the United States on allegations of child pornography for the 2020 movie Cuties, which is accused of sexualizing young children, Hungary would not be the only government taking action against the streaming service. And the criticism of Cuties has been cited as a significant factor in Netflix’s declining popularity.

While most of Hollywood refuses to limit content for the Hungarian youth audience, Disney and other companies were willing to censor content to meet religious standards in the Middle East, including a lesbian kiss being removed from the Star Wars: The Rise of Skywalker movie in many Islamic nations, and some of their Pixar content. 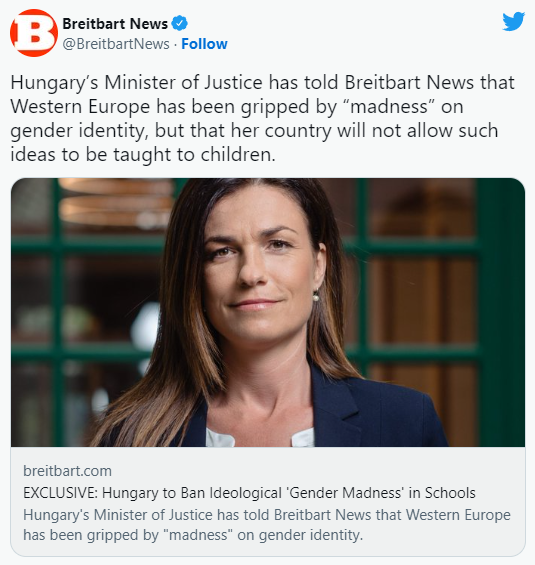 As Breitbart has also reported, Hungary’s Minister of Justice believes that Western Europe has been gripped by “madness” on gender identity, but her country of Hungary won’t allow such corrosive ideas to be taught to their children.

Maybe this will continue to push Netflix to abandon their “woke” programming.