How to Make Sense of Disney’s Ongoing War on Children When businesses go woke, it turns out that the wokeness is really a cover for shifting market pressures. That is, they aren’t alienating old groups; rather, they are reflecting the fact that their money is coming from new populations. The huge bucks in Hollywood and the NBA, for example, are coming from China, not America. And, when it comes to Disney, it’s not children that make the most money; it’s young people who, like Peter Pan, refuse to grow up.

Daniel Greenfield of Front Page Mag makes the case that Disney’s most fanatic consumers are in the over 18 demographic:

Disney isn’t for kids anymore. Its movie business is dominated by Marvel blockbusters. Half of Disney+ subscribers, its big bet on the home streaming future, are adults with no children.

What about the theme parks?

60% of Disneyland visitors were adults with no children. Only 36.7% of Disney World visitors had children under 18. The largest demographic for the theme parks, like the movies, are millennials. They are also members of the fandoms who are likeliest to spend money on licensed merchandise, and on toys and movie tie-ins that are Disney’s bread and butter.

And Disney is rapidly adapting with theme parks and resorts that emphasize its Marvel and Star Wars properties more than classic fare. Its Galactic Starcruiser hotel, aimed at Star Wars fans, costs $4,809 for two adults. Why bother with kid stuff when you can sell $13 beers?

Disney is no longer for families who care deeply about their children growing up to be happy, healthy, normal adults. Those are no longer Disney’s target market. Instead, they’ve directed their resources to the  dysfunctional adults you see screaming on college campuses over the outrage du jour.

Or as Greenfield continues:

Disney’s new demographic are adults who have never properly grown up and on some level still think of themselves as children. That’s also the profile for the average child molester. And of the kind of adult who insists that schools force children to “explore their sexual identities”.

Healthy adults raise, protect and care for children. Deeply unhealthy ones erase the barriers between themselves and children in ways that can be merely immature or outright evil.

Disney has forever tarnished the memories of the remaining adults who are still found of the House of Mouse. But the brand has destroyed that world of innocence and beauty that those families had hoped to pass down to their children and grandchildren. Now those parents and families are beginning to push back.

According to Breitbart, new data from the Convention of States Action and the Trafalgar Group show that 70% of American voters are now less likely to do business with Disney.

[…] after the iconic entertainment company came out in opposition to Florida’s Parental Rights in Education law and after a series of videos saw Disney executives and producers boasting about including LGBTQIA2S+ content in programing for children.

Some 57.2 percent said they are “less likely to do business with Disney;” while those “much less likely” come in at 11 percent — in all, 68.2 percent of voters are much more likely to look for alternative options for family-friendly content.

Only 9.4 percent say the development make them “more likely to do business with Disney.” 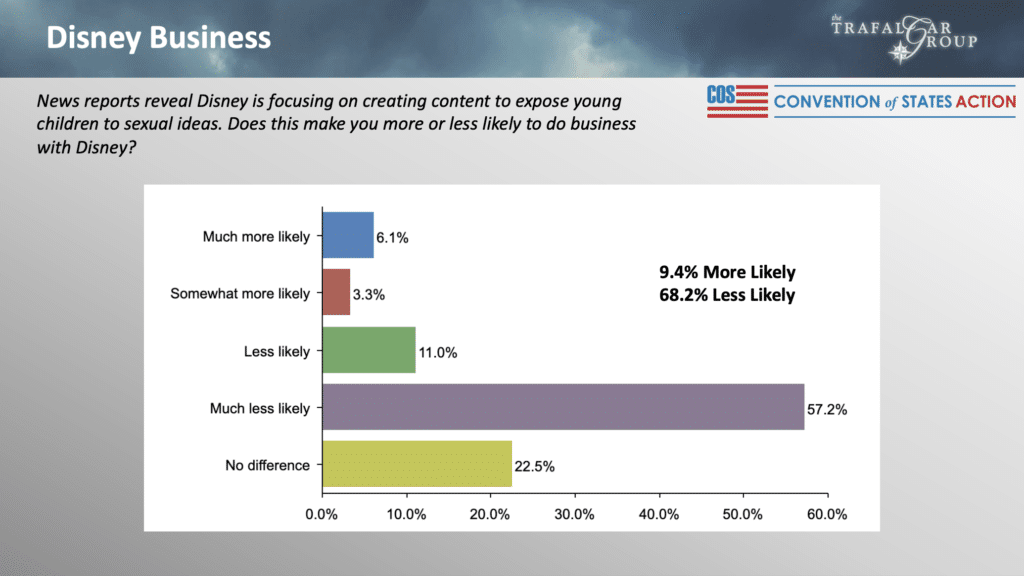 Other findings from their polling indicates that:

[Disney] isn’t for kids, it’s for broken adults. And it’s only natural that Disney would seek to create more broken adults to perpetuate its business model. A healthy functional adult isn’t nearly as profitable for the entertainment giant as a dysfunctional one addicted to its product.

Advocating that schools push sexual identity on kindergarteners is a cause that the entire entertainment industry, which wouldn’t exist without dysfunctional adults, can get behind.

What’s bad for America is great for Hollywood.

Functional people don’t spend all of their time in front of a television set. And functional families don’t plant their children in front of one and then buy them whatever they want to get them to shut up. Functional people are not very profitable for Disney or for the rest of Hollywood.

Stop giving money to people, and companies, who hate you.