Gary Larson retired The Far Side in 1995, citing “simple fatigue and a fear that if I continue for many more years my work will begin to suffer or at the very least ease into the Graveyard of Mediocre Cartoons”. Hugely publicity-shy – he has long refused to have his picture taken – he has since then released a compilation of Far Side cartoons, but worked to keep his pictures from being reproduced digitally, explaining in a letter the “emotional cost” of having his work “offered up in cyberspace beyond my control”.

Now, 10 Daily Australia reports on what appears to be cartoonist Gary Larson, creator of the 1980-95 Far Side newspaper strips, making plans on returning to the scene on the web:

Well, it appears the illustrator has warmed up to the idea of the web, with an update to The Far Side website signalling a comeback of some sort.

The site’s homepage now displays a fresh illustration of a man thawing out a block of ice with classic Larson characters stuck inside.

“A new online era of The Far Side is coming!”

In an online updating over the weekend of thefarside.com, which had previously remained virtually unchanged for more than a decade, has left many of his fans hoping for Larson’s return. A new image, in which some of Larson’s most iconic characters – the cow on two legs, the bee-hived woman, the nerd – are being defrosted from an iceberg, has appeared on the site, along with the promise: “Uncommon, unreal, and (soon-to-be) unfrozen. A new online era of The Far Side is coming!” 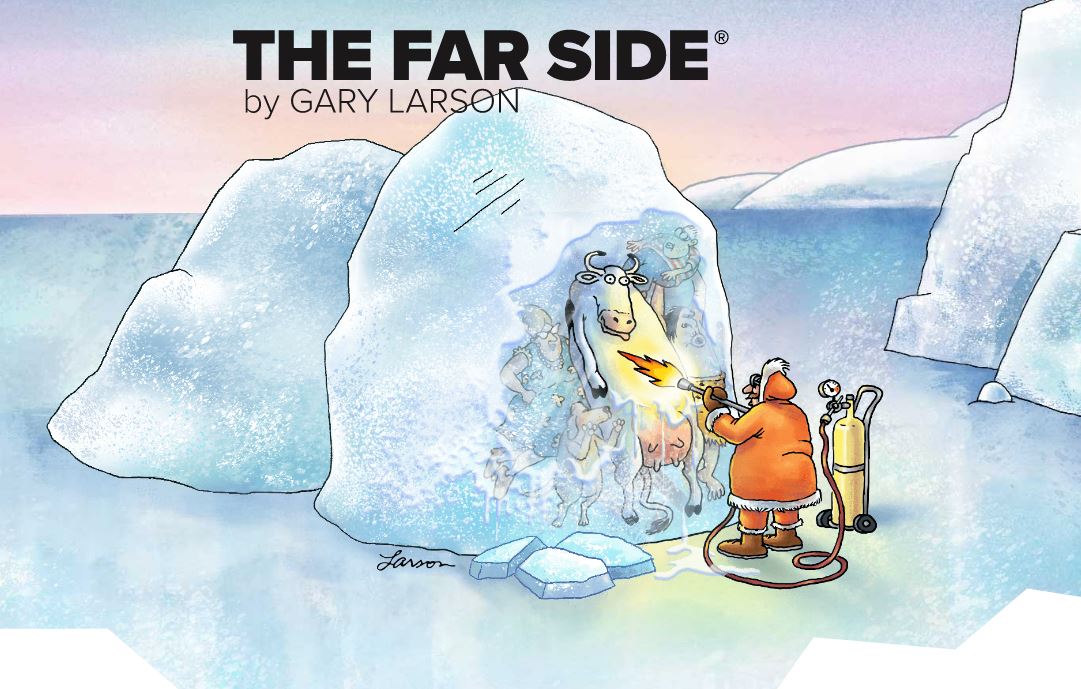 It’s not clear whether it’s for real or just online sales of his past creations, but if Larson avoids political correctness in what he’s planning, then he’ll be accomplishing something in an era where humor is sadly being destroyed by “wokeness”.

While we’re on the subject of newspaper strips, the Kansas City Star reported that editor Lee Salem of Universal Press Syndicate, the publisher behind strips like Fox Trot, Doonesbury, and Calvin & Hobbes, passed away at age 73.