WarnerMedia didn’t have to wait until Wonder Woman 1984 debuted both on HBO Max and in theaters: The Burbank, CA-based Warner Bros is putting its entire 2021 theatrical slate on HBO Max for the films’ respective first month of release, concurrent with a global cinema release.

Following the one-month HBO Max access period domestically, each film will leave the platform and continue theatrically in the U.S. and international territories, with all customary distribution windows applying to the title. 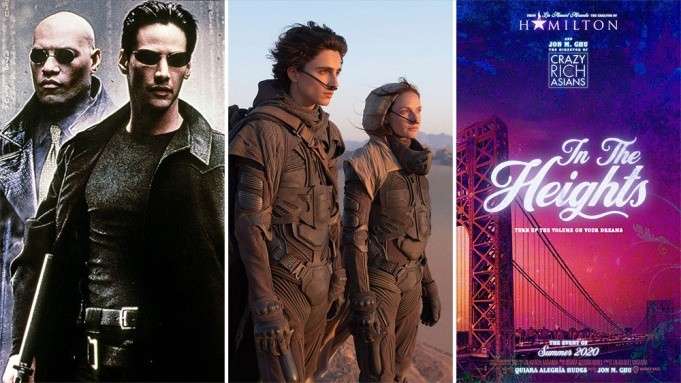 And get a load of what you’ll be able to see in-home next year: Denzel Washington’s The Little Things, Judas and the Black Messiah, Tom & Jerry, Godzilla vs. Kong, Mortal Kombat, Those Who Wish Me Dead, The Conjuring: The Devil Made Me Do It, In the Heights, Space Jam: A New Legacy, The Suicide Squad, Reminiscence, Malignant, Dune, The Many Saints of Newark, King Richard, Cry Macho and Matrix 4.

Their press release reads, “The hybrid model was created as a strategic response to the impact of the ongoing global pandemic.” Movie theaters aren’t apt to be entirely happy with this and it will be interesting to see what they charge for admission to the Warner Bros’ movies. Exhibition busted their butts to get open for Tenet, and today’s news may come to some a thumb in the eye.

But today Deadline also published this discussion from Peter Bart and Mike Fleming Jr. challenging Warner Bros rights to do this with their entire slate:

Legendary Entertainment either has or will send legal letters to Warner Bros as soon as today, challenging the decision to put the Denis Villenueve-directed Dune into the HBO Max deal, and maybe Godzilla vs Kong as well. On the latter, Legendary reportedly had Netflix ready to pull the film from Warner Bros for around $250 million, before WarnerMedia blocked it. Sources said Legendary had no advance notice before last week’s announcement that both Dune and Godzilla vs. Kong were part of the HBO Max plan.

Legendary certainly seems to have the right to challenge WarnerMedia on its decision: Legendary and its partners provided 75% of the $165 million or so net budget of Dune, the adaptation of the Frank Herbert novel that was envisioned to be the first of multiple films exploiting the six-novel series. It put up a similar amount of the funding on the Godzilla vs. King film. Will the long-term viability of the franchises be tarnished by starting out as an HBO Max offering? It’s the same question the industry is asking about Wonder Woman. Legendary wouldn’t comment. I’m told there are three other films that have a right to believe movies they majority financed are being served up to provide a steroid shot to HBO Max’s paid subscriber base by undoing deals that were made for theatrical release and the traditional revenue waterfall.

I’ve spoken to numerous deal-makers with skin in the game here, and none were happy. They understood Warner Bros was in a tough spot; movies on a shelf accumulating interest costs (though interest is low right now), and the likelihood of half a year or more of the kind of paltry attendance that hobbled the studio’s Christopher Nolan film Tenet, before the theatrical market comes back with a glut of product. But a vaccine is just around the corner, and some said they were upset that Warner Bros announced a full year of movies to HBO Max, instead of leaving open the possibility the experiment would end if movie going rebounds after a vaccine eradicates the pandemic. They believe it was to make a statement to Wall Street about the overriding importance of HBO Max subs.

That said, look at WarnerMedia’s dilemma: Is it better for the studio to re-shelve its entire slate and collect dust and interest charges? And for those theaters that are open, is it fair that they don’t have any notable product to play? How does the studio commit to $40 million P&A domestic spends in advance when the U.S.-Canada marketplace may not be open or is unpredictable?

HBO Max Pulls Plug on 'Doom Patrol' and 'Titans'
All the Reasons HBO Max's 'Velma' Went So Terribly Wrong
Despite Everyone Hating 'Velma' 2nd Season is Reportedly in the Works
Prime Video Surpasses Netflix in the U.S. Streaming Market
HBO Max's 'The Penguin' Series to Tie In to 'The Batman' Sequel
Hugh Jackman: I Need 'Six Months' to Get Back in Shape for Deadpool 3
Warner Bros. Says "We're Done Cancelling Upcoming Films & Shows"