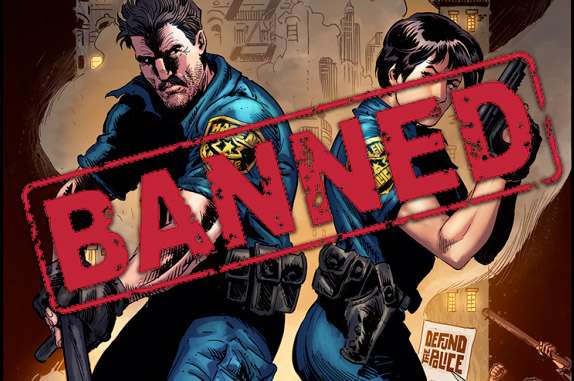 Mike Baron is an Eisner award winning comic book writer and novelist, and was the longest running writer on The Punisher for Marvel Comics, crafting the popular vigilante’s stories for over 5 years. But in today’s culture, the biggest comicbook publisher in the world is trying to soften the Punisher’s image, while Baron’s newest works are being censored on some of the internet’s biggest forums and social media platforms by thin-skinned, dishonest, anonymous moderators who simply don’t agree with Baron’s support for police, or his conservative viewpoints.

Baron’s latest work, and the comic that’s being censored is called Thin Blue Line, a 64 page graphic novel whose protagonist is a Hispanic single mother known as Officer Valeria Baca, a well-meaning cop that has to deal with protecting her city’s mayor during a harrowing night of mayhem and madness as agent provocateurs exploit a police shooting to start rioting and pillaging her community. Over the course of the story, she deals with violent gangs, left wing rioters, right wing militia, and corruption at the highest levels of governance. Basically it’s a story ripped right from today’s headlines. 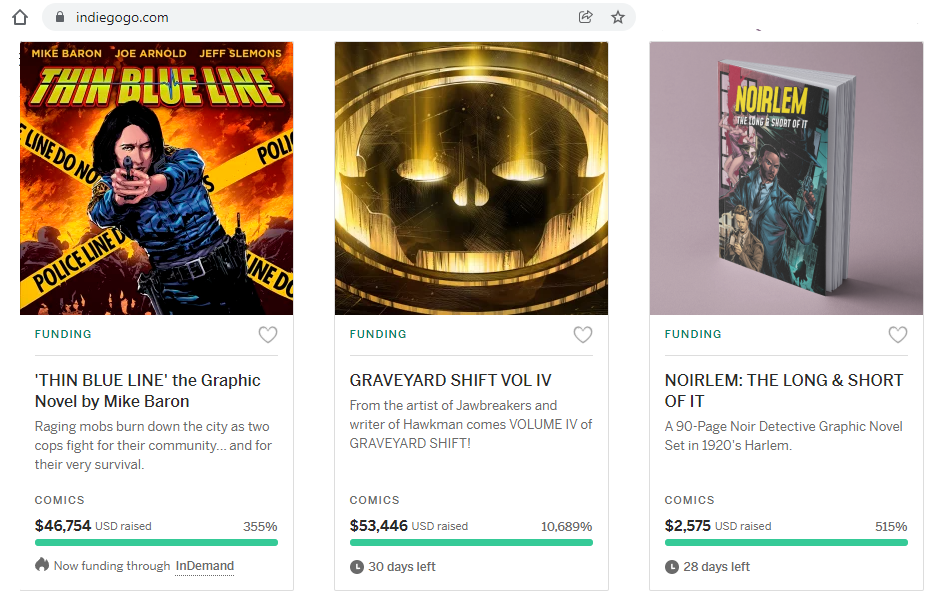 When Mike and his team went the traditional route to get the book published, they were met with extreme prejudice and outright obscene rejections from indie publishers and comic book media outlets. So Baron returned to crowdfunding where he has experienced success before, notably with his humorous Florida Man comic. The Thin Blue Line creative team launched an Indiegogo campaign which was boosted by YouTube appearances on CG Kings with other livestreams that quickly brought some much-needed attention to the project. But what really elevated the campaign was Baron’s recent appearance on January 9th when he was interviewed on FOX News Sunday on the occasion of National Law Enforcement Appreciation Day.

Following the interview, Thin Blue Line’s fundraising soared on Indiegogo, and its newly launched companion campaign on Kickstarter did so well it quickly became the number one graphic novel on the platform, and remained in that position for several days after. In order to take advantage of the publicity and momentum, the creative team began sharing posts on social media and forums linking to the FOX News interview and other supportive articles about the book from Law Enforcement Today, Bounding Into Comics, Just the News, and The Federalist. 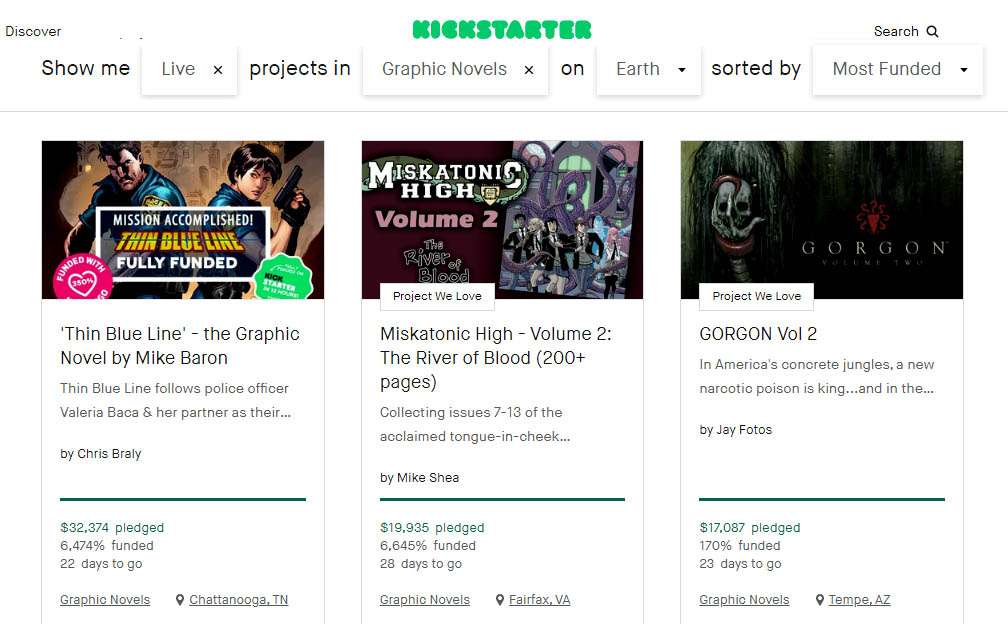 But remarkably, much like a similar promotional post about his Florida Man graphic novel was banned from Reddit back in 2020, when the campaign manager cross-posted a link to an article about Thin Blue Line from over on the Geeks & Gamers subreddit, the post was banned by an anonymous moderator. Their reasoning? “Misinformation and racism.” 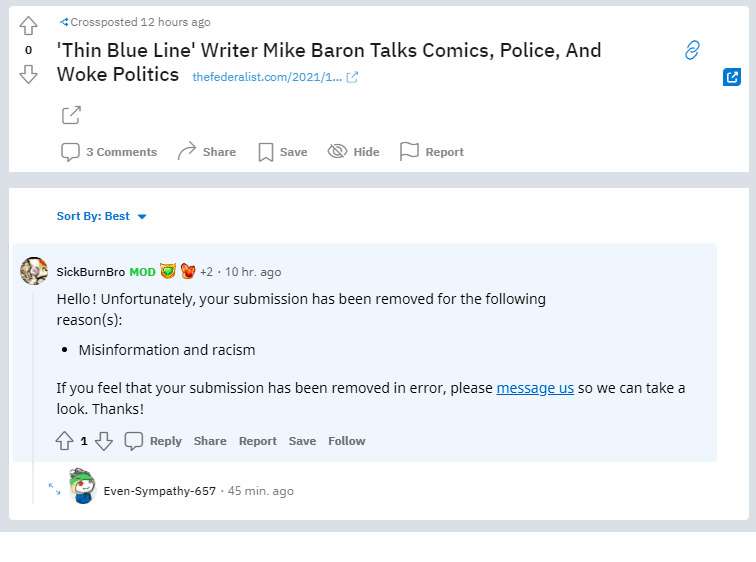 While it’s true that most of Reddit has become a cesspool of left-wing thought, that comics subreddit has over 1.7 million subscribers, and is the biggest comics-related forum on the web. And according to the subreddit’s published community guidelines, cross-posting a link without comment to Baron’s interview about his comic did not break any rule. 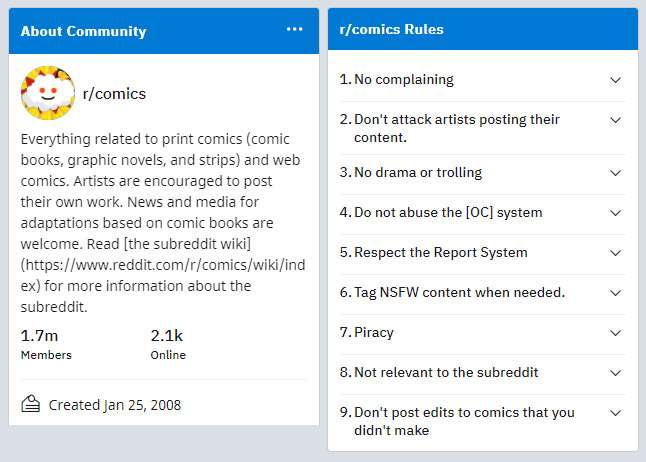 The campaign manager reached out to the subreddit’s moderation team for clarification on what they had determined was the “misinformation” or “racism” in the link, but rather than responding to the query, the moderators abruptly banned them from even communicating with the moderators for 28 days.

This censorship follows a similar back and forth the team experienced with Facebook Meta. Over the weekend, the social media giant rejected their advertisements for the book. Facebook’s approval team would not permit the ad below because they determined it promoted “sensitive social issues that could influence public opinion.” When the creative team tried to appeal Facebook’s decision, it was rejected it a second time. 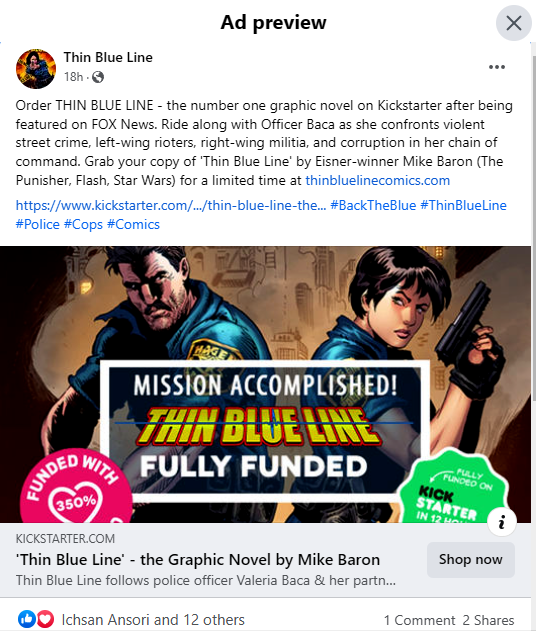 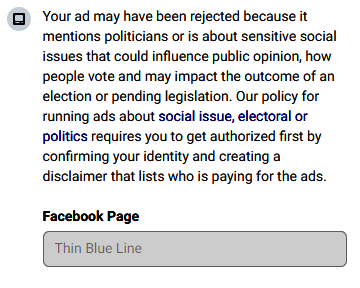 The creative team elevated their appeal yesterday, with the campaign manager (BF’s own editor in chief Chris Braly) sending in several requested documents required by the platform to create an official disclaimer for their advertising, which Facebook says is now required for all “political advertising”. The process can take several days, but their crowdfunding campaigns are scheduled to wrap up in just over a week, so time is of the essence in them reaching a decision.

So far, the team has not posted anything about this on their Facebook page at the time of this report.

This chilling trend of stifling free expression of conservatives is nothing new. More and more companies and conservative influencers are being censored, banned, and kicked off platforms for thought-crimes, while the platforms’ users are getting a warped idea of the world because the information that they interact with is being curated by radicals. The anonymous moderators that control the content are controlling reality, and that’s what these tech companies and their minions have control over. How can conservatives combat this?

For more on this story, check out Bounding Into Comics’ reporting here. And you can also check out the campaigns for the banned Thin Blue Line at either Kickstarter or Indiegogo before they end in the next ten days.