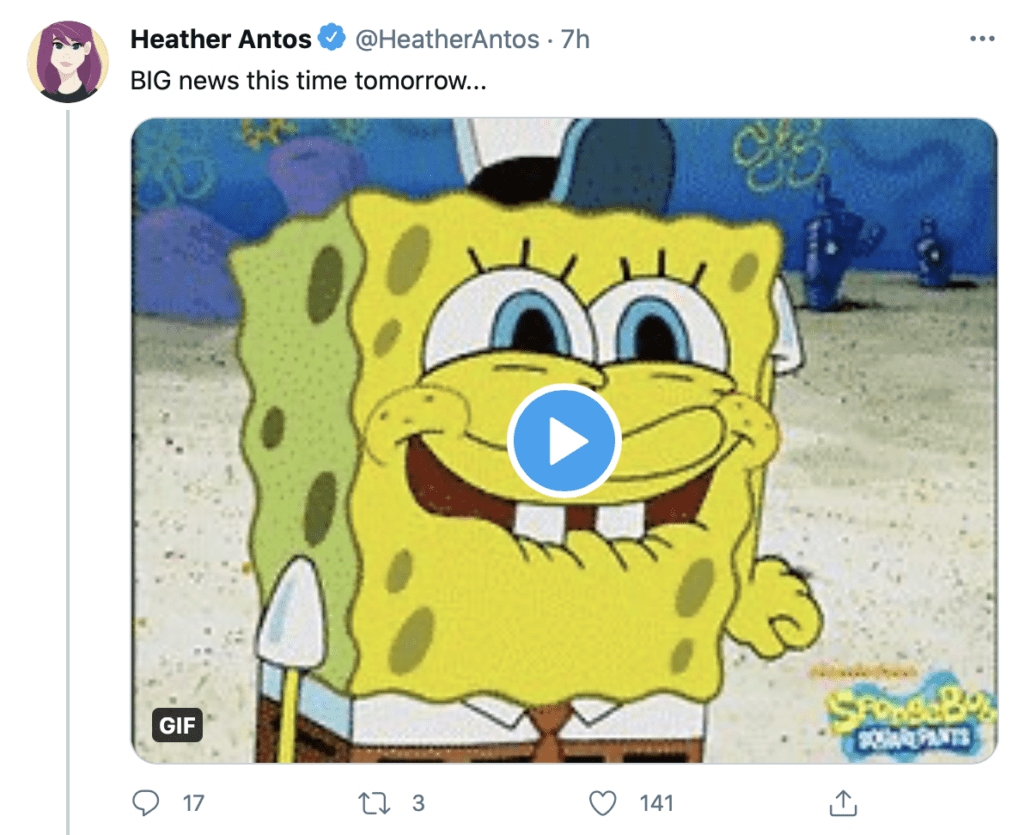 Earlier today, Whisper Network member Heather Antos alluded to a mysterious announcement she plans to make on her social media tomorrow. Multiple sources reported to me that she’s in fact moving to IDW in an editorial capacity.

So other than simply “scooping” the poor thing, I thought I’d inform my readers that I’m still investigating a couple of things about this:

1) Why is she departing Valiant? Was it under controversial circumstances, as it was with Marvel (i.e. rumor-spreading, bullying, and social terrorism, according to multiple sources)?

2) Who’s in the pocket of the Whisper Network at IDW that allowed her to get a job there?

I have a suspicion who it is at IDW that’s part of the Whisper Network, and wants her on their team, but I’ll be investigating further before I reveal their name and potential motives.  I will not post anything without multiple sources confirming with me first. 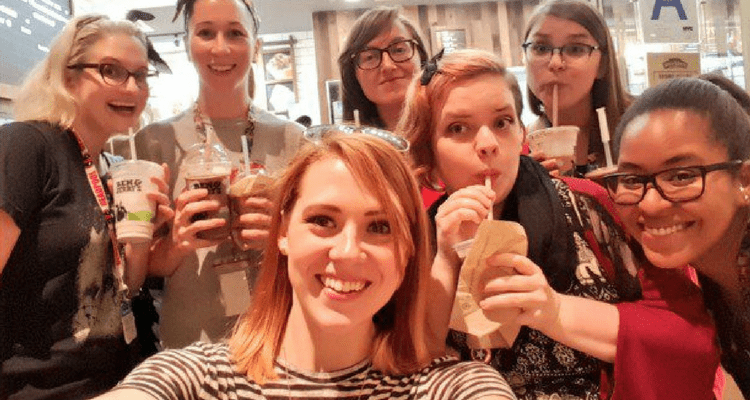 However, the insider news that I can definitely share with you today is the reason Ms. Antos is NOT going to DC Comics. According to my sources, she has been attempting to get in DC ever since her unceremonious departure from Marvel Comics back in late 2018.

Here’s why they won’t have her.

In July of 2020, Tom King put his foot in his mouth. Wanting to virtue signal to the SJW community and gain favor with the Whisper Network, King made a statement. He denounced Jae Lee, claiming him to be part of a hate group.

Jae fired back in a now-infamous Instagram post, blasting King for both his unprofessional behavior, and for outright lying – notably by saying the following:

“I’m writing this because I’m angry. These irresponsible tweets are not harmless. They do not just go away. They have real world consequences. They can take away your job. Your life. Your memories. June and I were robbed of a special day. So, no, we’re not “all good.”

A post shared by Jae Lee and June Chung (@jaeleeart) 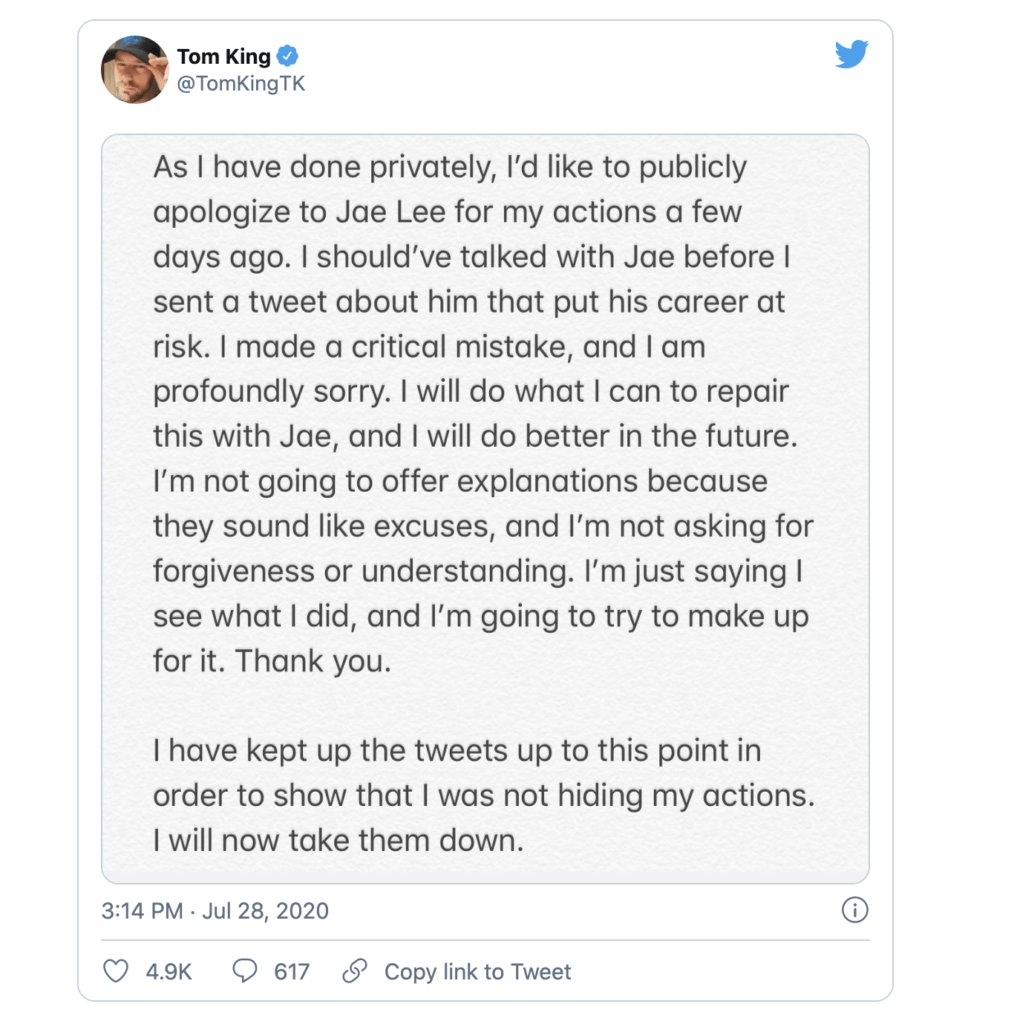 So why did Tom King apologize so quickly?

Not because he was worried about hurting Jae’s feelings, because clearly he didn’t care or he wouldn’t have made the attack in the first place. It’s because, according to my multiple sources, he was told to. More specifically, ordered to apologize.

By none other than Jim Lee himself, the Chief Creative Officer and publisher of DC Comics.

Not only does Jim Lee have a large amount of power in DC Comics as one of their top executives, one of his closest friends in the industry going back decades is, you guessed it, Jae Lee. Tom King defamed someone working for DC, and one of Jim’s personal friends at the same time. Not a smart move.

So fearing for his job and future opportunities, King issued a forced apology.

KING APOLOGIZED – HEATHER ANTOS DID NOT

The vast majority of fans, and almost everyone in the industry, sided with Jae Lee. And most felt that the apology King issued, whether forced or not, was the professional and appropriate thing to do. This is how adults behave, so many applauded this move.

But not Heather. Nope. And neither did any of her close allies. 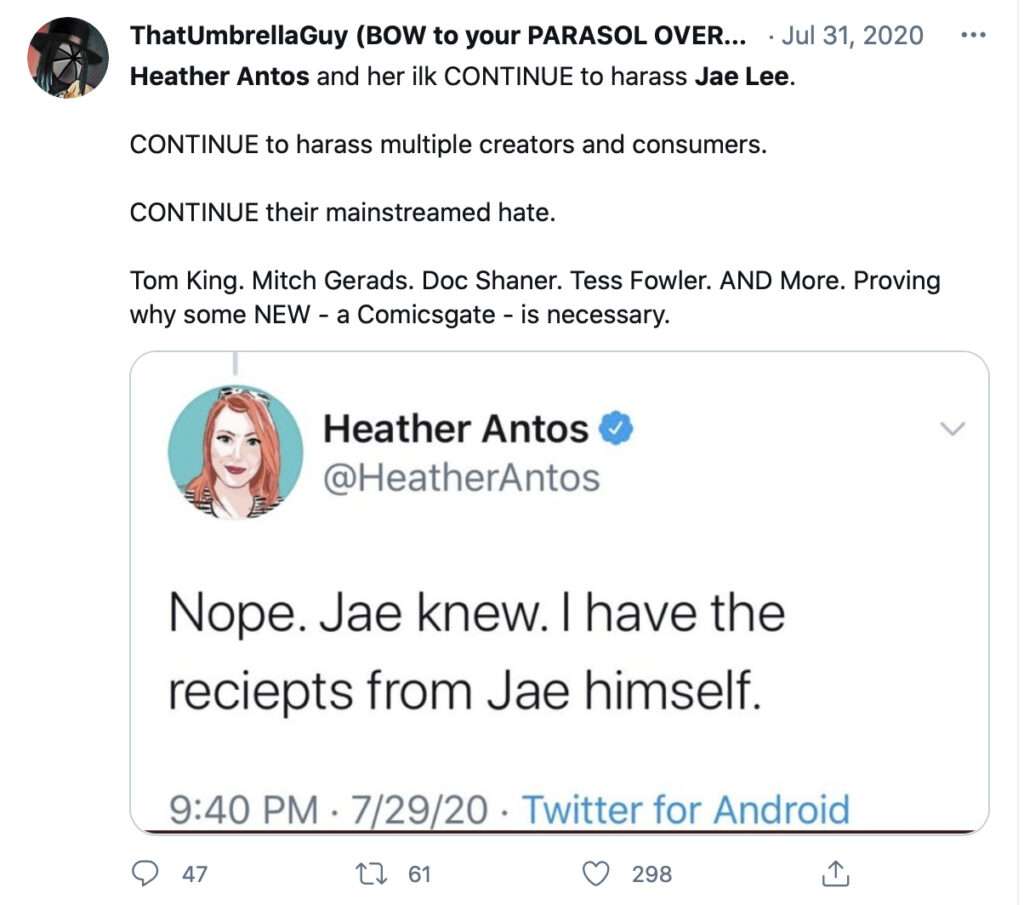 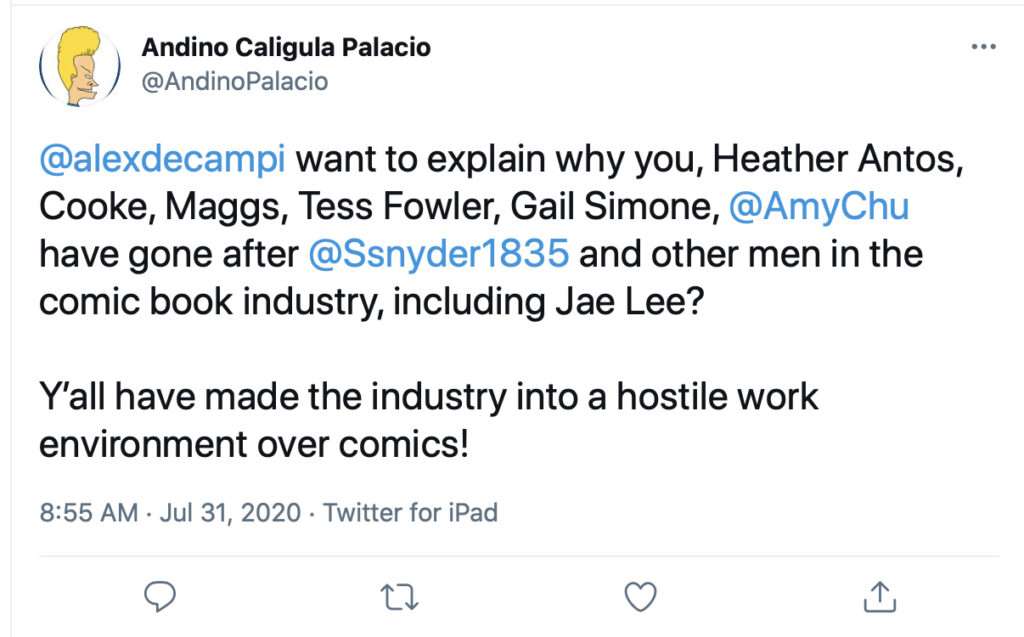 Even after this issue (that had nothing to do with her in any way) had seemingly been resolved, she continued her attack on Jae Lee, furious that King had apologized.

Antos demanded punishment for Jae and seemed to try and rally her cult-like following of frothing, angry fans to continue the hate and harassment against the talented Asian artist, for reasons only Heather (and maybe her therapist) are aware of. 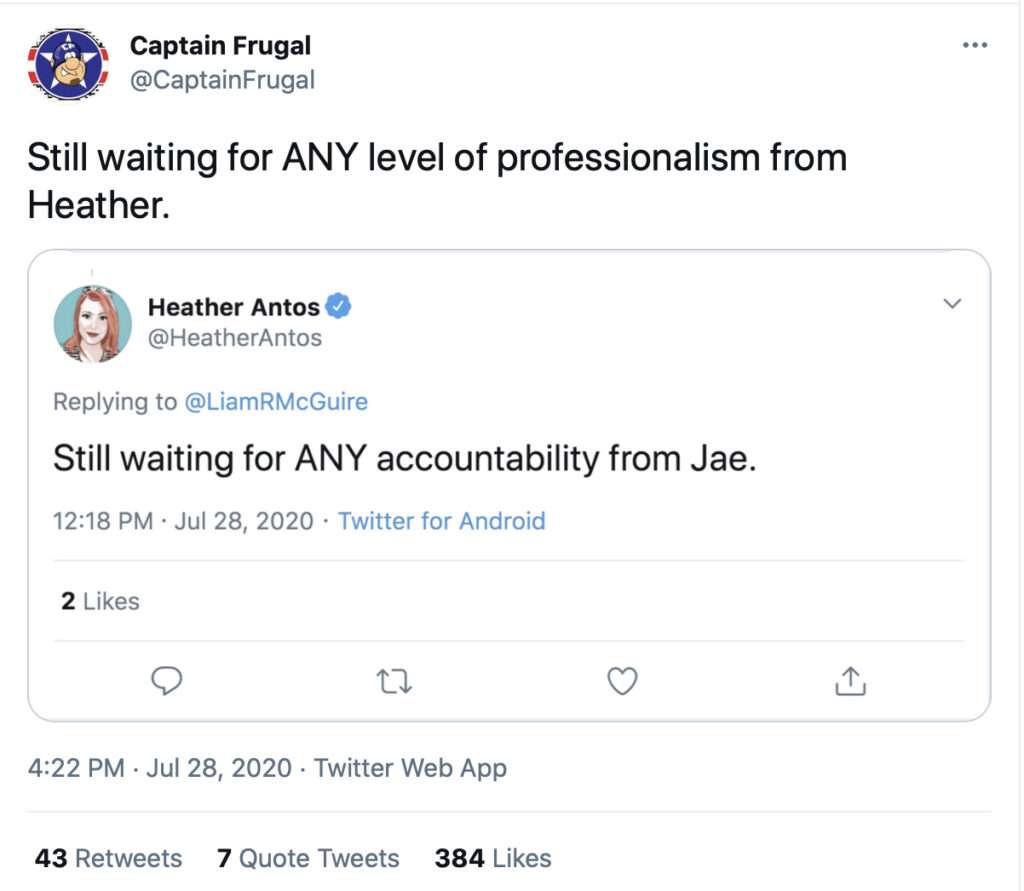 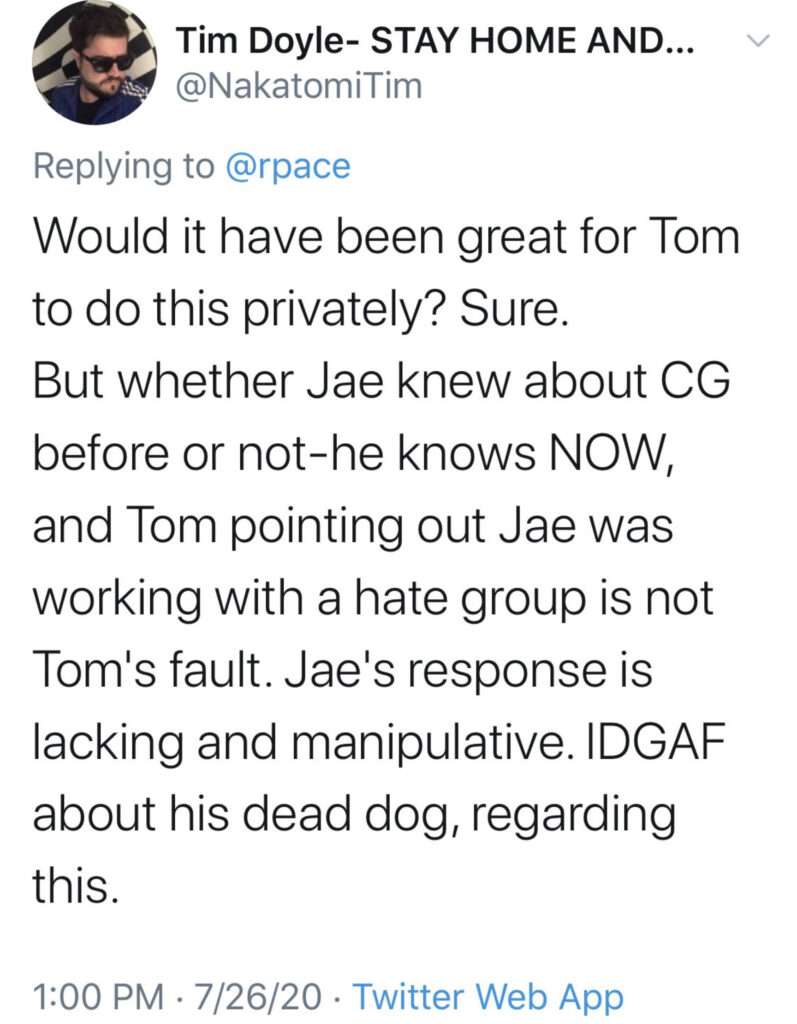 One of her close comrades and a supporter of the Whisper Network, Tim Doyle, joked with her in a now-deleted Twitter thread that he DGAF (Doesn’t Give A F**k) that Jae’s dog is dead, leading to more harassment and anti-Asian hate against Jae. Many wondered why Heather, who appears to have a history of anti-Asian hate (including her mocking of Alterna Comics publisher Peter Semeti) would continue this attack on Asian creator Jae Lee. 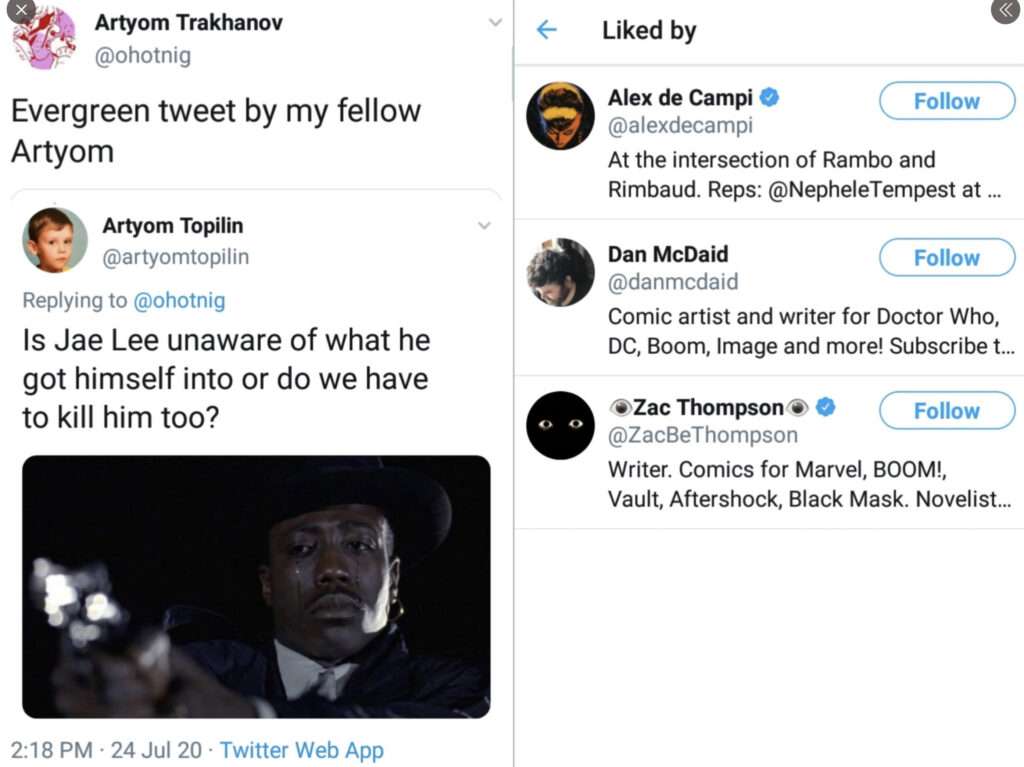 Another Bleeding Cool alum (who seems to be a close ally of the Whisper Network), Joe Glass went into damage control mode, trying to explain away his arguably racist behavior and the continued attacks on Jae Lee as well.

JIM LEE SAYS ‘NO’ TO ANTOS

According to my sources inside DC Comics, Heather Antos’ racialized attacks on Jae Lee, and what’s been alleged as her continued badmouthing him privately ever since, have not been forgotten. While she seems to feel like she’s untouchable, and her antics may have gone unnoticed, many people in the industry, including Jim Lee himself, HAVE NOTICED, and because of that, much like fellow Whisper Network comrades Mags and Alex De Campi, she is NOT WELCOME in DC Comics under current management.

Maybe we shouldn’t be saying #StopAsianHate

Perhaps #AntosAsianHate should trend on Twitter, until she issues a sincere apology to Jae Lee, and acknowledges her prejudice, these acts of racial discrimination, and her whatever it is that may only be described as “anger issues” towards the Asian community. 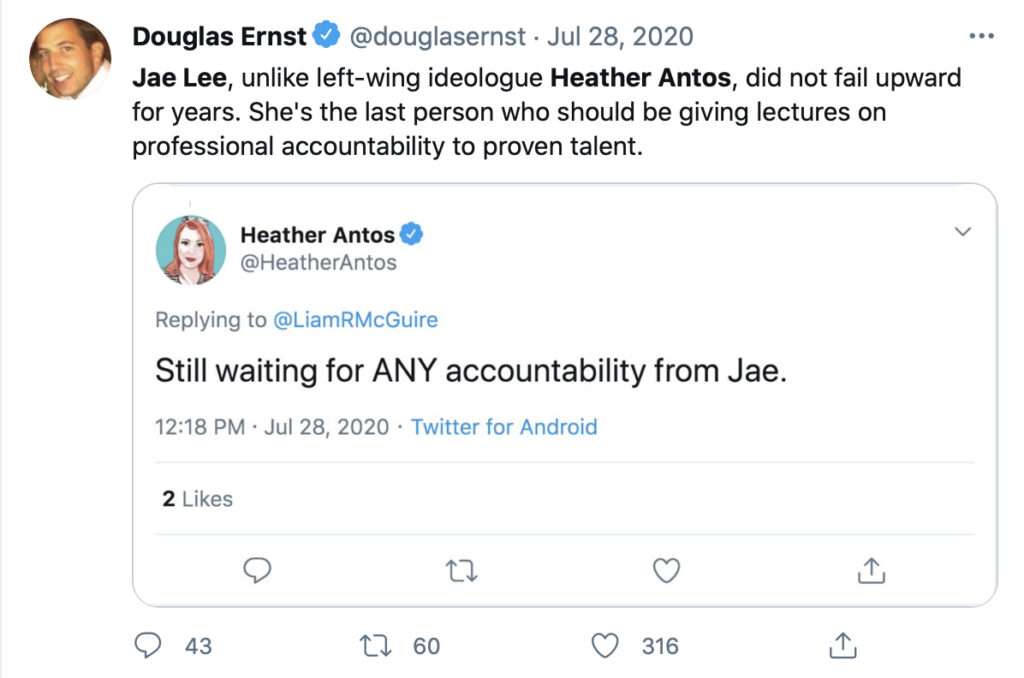 I know you may be ignorant, Heather.

But as one Twitter personality once said, “Ignorance doesn’t absolve you from impact”.

Ignorance doesn’t absolve you from impact.

Insert pretentious crap about myself here. Nerdfighter. Determined dreamer. Has ambitions to be crazy cat lady if marrying various celebrity crushes proves impossible. And yet after all this time, I’ve finally learned I don’t know anything, but I have also learned that people will pay for what I do know. Life is good.