Exposed: Disney is No Longer Family Friendly – or Kid Friendly Now that the Florida legislature has approved, and Governor Ron DeSantis signed, new legislation prohibiting public schools from formally teaching pupils in grades K–3 about activities linked with the LGBT movement, and generally banning sexual orientation or gender identity discussions for young kids in public schools, Disney has dispelled any notions that they are family friendly. Rather than remembering that its objective, as stated by the late, great Walt Disney himself, was to create outstanding entertainment for children, Disney has instead publicly declared their devotion to changing the law. As the law was passed, they made the following announcement.

Walt Disney Co. doubled down today on demanding sex education and transgender lessons for kindergartners to be guided by state-funded adults rather than the children’s parents.

“Florida’s HB 1557, also known as the ‘Don’t Say Gay’ bill, should never have passed and should never have been signed into law. Our goal as a company is for this law to be repealed by the legislature or struck down in the courts, and we remain committed to supporting the national and state organizations working to achieve that,” a Disney spokesman told The Daily Wire.

“We are dedicated to standing up for the rights and safety of LGBTQ+ members of the Disney family, as well as the LGBTQ+ community in Florida and across the country.”

Last week we also reported on the anonymous open letter from conservative Disney employees who feel much differently. They detailed their hostile work environment just for holding different viewpoints.

“The company’s evolving response to the so-called ‘Don’t Say Gay’ legislation in Florida has left many of us wondering what place we have in a company actively promoting a political agenda so far removed from our own,” the letter said. “TWDC leadership frequently communicates its commitment to creating an inclusive workplace where cast members feel comfortable sharing their perspectives and being their authentic selves at work. That is not our workplace experience.”

Democrats and the media have unsurprisingly sloganeered the bill with the buzz term “Don’t Say Gay.”  However, the bill, which protects parents’ rights, says something quite different:

Classroom instruction by school personnel or third parties on sexual orientation or gender identity may not occur in kindergarten through grade 3 or in a manner that is not age-appropriate or developmentally appropriate for students in accordance with state standards.

The Florida bill says it quite plainly. There is nothing in the bill that prevents a child from discusser their parents, even if it is a family of two daddies.  If that happens, the appropriate response from the teacher, should other children be curious, is what public school teachers have said for years: “That’s a good question.  When you go home, ask your parents about it.”  It is not the schools’ job to teach 5-year-olds, who still believe in Santa Claus and unicorns, about the nuances of gay marriage or the endless numbers of gender identities that apparently now exist.

But that hasn’t stopped most public schools from marketing LGBTQ advocacy to children. It is happening every day across the country:

Pronoun pins, queer storytime, drag queens, and a petition for LGBTQ sex-ed were some of the activities at @AustinISD pride in the park event. pic.twitter.com/bYEdsNOkQ9

.@WestChesterASD is voting on Monday to keep “Gender Queer” in the school library.

Their reasoning is, “there are explicit images… but they are not pornographic.” To be clear- A kid engaging in oral sex with another kid is “not pornographic” according to these degenerates. pic.twitter.com/8XvUUGtarm

These are internal messages from a 4th grade elementary teacher in @AustinISD. She’s upset that an entire week dedicated to LGBT still wasn’t good enough. Coincidentally, 20/32 of her FOURTH GRADERS are LGBT and have “come out” to her

What the hell is going on in these schools?! pic.twitter.com/dCPjBEW7jv

Teachers are DESPERATE to talk to little kids about sex. It’s a disorder pic.twitter.com/6lWzpdWhBy

These are Disney’s people. And those teachers are quite emphatic in their demands to discuss homosexuality with little children. No wonder it’s become imperative to restrict this sort of indoctrination at the public school level. And now Florida has done just that. 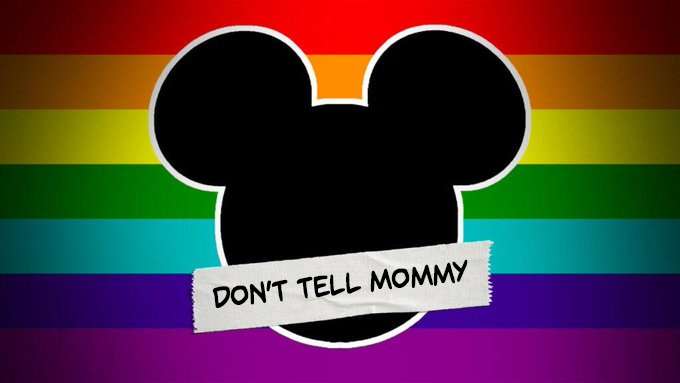 In the full text of the bill, the word “parent” appears 32 times, and the phrase “parental” appears eight times, and the Act also places a strong emphasis on parental notification and parental awareness of what children are taught or exposed to in school. This is about parents protecting their children from sexual instruction or the proselytization of gender ideology on their 5 years olds. But Disney will not budge and the company is digging in its heels.

DeSantis absolutely drops the hammer on Hollywood for their criticisms of Florida at the Oscars last night:

“If the people who held up degenerates like Harvey Weinstein as heroes are opposing us on parents right, I wear that like a badge of honor.” pic.twitter.com/8XhiyckHuT

Governor DeSantis says, “leftist politicians, corporate media outlets, some of these activist groups, they actually have read the bill. And they are sloganeering because they don’t want to admit that they support a lot of the things we are providing protections against”.

For example, they support sexualizing kids in kindergarten. They support injecting woke gender ideology into second grade classrooms. They support enabling schools to “transition students” to a “different gender” without the knowledge of the parent much less without the parents consent. What they are doing with these slogans and these narratives, they are trying to camouflage their true intentions.

Someone told me that there’s even people in Hollywood that are opposed to providing protections for parents and enforcing parents rights. The one thing I’ll say about that: the people who held up degenerates like Harvey Weinstein as exemplars, if those are the types of people opposing us on parents rights, I wear that like a badge of honor.

If that’s too difficult to understand, podcaster Joe Rogan breaks it down in the simplest of terms here:

Watch as podcaster @JoeRogan easily explains Florida’s House Bill 1556: the ‘Parental Rights in Education’ bill (smeared as the #DontSayGay bill) far better than anyone in mainstream media (or anyone at Disney) could manage to.

Disney will continue to fight this because the push into more LGBTQ content is coming right from the top and it’s based on their Reimagine Tomorrow initiative which we’ve discussed before. One of the top Disney executives explains why the company insists on . During a conference call to explain the corporate intents of the company, Disney entertainment president Karey Burke says, “As the mother [of] one transgender child and one pansexual child,” she supports having “many, many, many LGBTQIA characters in our stories” and wants a minimum of 50% of characters to be LGBTQ+ and racial minorities.

Many people may surprised when teachers admit over 80% of their classroom has come out as gay, or that this top level Disney executive has two queer children. But this is how grooming works, and these pro-LGBTQ advocates that have taken over Disney are grooming children despite your better judgement. To better understand how this grooming works, please take the time to review the following interview with Helena Kerschner, who was groomed to think she was a boy, but later “de-transitioned”.

Now the same indoctrination is getting mainstreamed in our public schools and the Walt Disney Company is so committed to forcing this on your children, that they’re increasing the number of LGBTQ characters in their content to normalize this behavior. They’ve even announced they plan to reinsert an originally deleted scene in their upcoming Pixar film ‘Lightyear’ which will feature a same sex kiss with one of the main characters. In other words, they want to do a run-around of the parents, despite their desire to prevent their kids from being indoctrinated in the modern gender fluid sexual revolution. And since sadly, many parents don’t pay attention, they’ll be forced to explain what’s going on in the latest Pixar or Disney movie, while struggling to understand how Disney went from being a wholesome, family-friendly operation to an indoctrination center for LGBTQ politics.

Protect the children. Stop giving money to people that hate you.