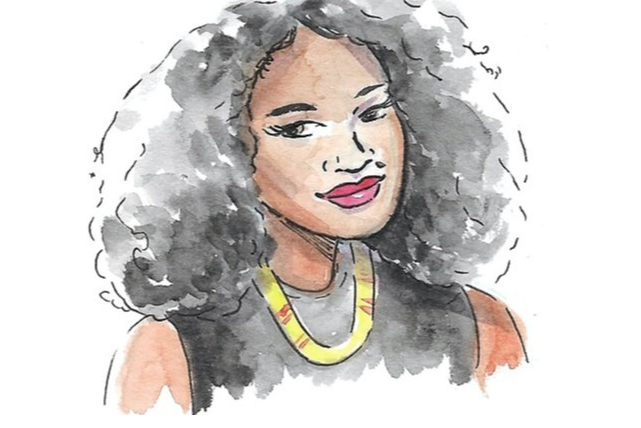 For more than a decade now, Kickstarter has been at the epicenter of a crowdfunding revolution, convincing independent creators to build their dream projects and cut out profit-taking middlemen. Indeed, it’s spawned a number of noteworthy projects since its 2009 inception, including Peloton, Oculus VR, and many more.

The world of independent comics had also found new life in crowdfunding, as the biggest independent publishers have been “gatekeeping” out any creators that don’t tow the current PC and “woke culture” line. This is especially true in the US, which has been as affected by culture wars as the rest of the entertainment industry today. With the bigger publishers far more interested in inserting diversity, inclusivity, intersectionality and other woke issues in their products than in boosting sales, dissenting creators go indie and look for ways to connect with like-minded customers. Platforms Indiegogo and Kickstarter have brought new life to these endeavors.

That was until August when Jamila Rowser was hired as divisive Comics Outreach Consultant for Kickstarter. She took what could only be called an unconventional approach to the job. As the newest employee of the crowdfunding platform’s Publishing & Comics Outreach department, Jamila Rowser, apparently chose to make herself unreachable on Twitter by people outside of her own social network, by pre-emptively blocking hundreds of them on Twitter.

How did this unexpected form of ambiguous “gatekeeping” go with creators?

Never interacted with your new colleague, but I & many others find ourselves blocked by her.
Not a good start on her first day.
Do kickstarter not want our help in promoting/funding indie projects?
I’m guessing I’m not welcome as a creator either?
Disappointing behaviour. pic.twitter.com/JJB5Ar3G1J

So @kickstarter’s new comic book campaign consultant #jamilarowser blocked me recently. I read their “mission statement” & saw their co-founder Perry Chen is Asian.
They ought to scrap their mission statement, because they’re sending a message of inequality to hundreds of us. pic.twitter.com/Yq4tYcmFtf

Which means Kickstarter loses that money, the creators lose that money — and the creators may begin reevaluating using Indiegogo as an alternate platform.

This is a losing proposition all-round for Kickstarter.

But when Kickstarter announced in December its plan to develop and fund a “decentralized crowdfunding protocol,” that will be built using the “carbon-negative” blockchain platform, Celo. Many creators were apoplectic. Although Kickstarter plans to transition its website to this new technology sometime in 2022 and will make the tools available for anyone else to make their own crowdfunding platform as well, many creators balked at the idea.

Rowser, who is an indie author of YA comics with her own share of fully-funded Kickstarter campaigns under her belt, only joined the team in September, but after only three months at the job, she announced her resignation following Kickstarter’s new blockchain protocol.

“I’ve resigned as Kickstarter’s Comics Outreach Consultant due to their blockchain decision,” Rowser said on Twitter. “It’s been a rewarding experience and I’m grateful to have helped creators fund projects. However, I can no longer advocate for them while staying true to myself and the community I love.” 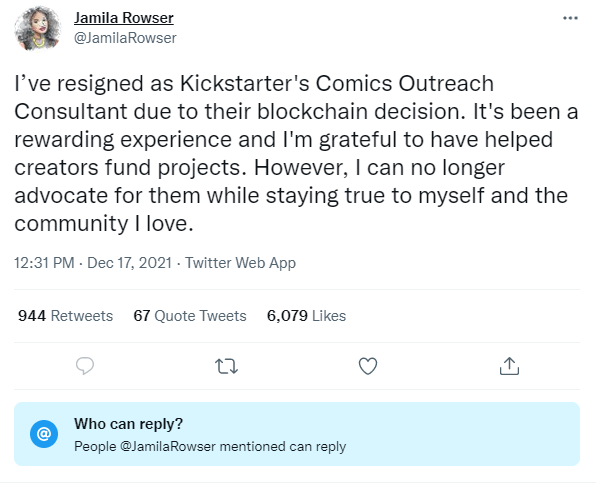 For their part, Kickstarter says that their move into the blockchain aims to create better ways for creators to connect with their communities, and for backers to have easier and more profound access in the discovery and participation of the projects, as well as to better control their data and have more tools to assess the trustworthiness and viability of the project.

So why would Rowser and other creators have a problem with Kickstarter entering the blockchain realm? It’s actually sort of hard to quantify. While it feels more like a mere “virtue signal,” the actual specifics of the creator concerns vary, breaking down into two qualms: the potential environmental impacts of moving Kickstarter onto the blockchain, and Kickstarter campaigns being damaged by being associated (however distantly) with cryptocurrency scams.

As for environmental concerns, a single blockchain data center use an equivalent amount of power as a medium-size town, but many companies, like Apple, Facebook, and Google, are already using renewable energy to power their data centers, so is this a real concern?

That didn’t stop the weird flex from Kickstarter creators.

I joined the platform 12 years ago and have run 10 campaigns since then. I have a special place in my heart for KS, but I’m not backing another project until y’all walk this back. https://t.co/MBmWX1MZfu pic.twitter.com/GvrVarme3q

Assuming they don’t reverse this decision, I’ll be deleting my KS account, despite several campaigns having not yet shipped. I’m just going to eat the loss instead of be a part of this bullshit. https://t.co/II77AxBJUf

Ah ha ha don’t use kickstarter anymore guys! They fucked everyone over! Shocking they don’t actually care about small businesses and people in need!

Just another fucking corporation shilling out for crypto bullshit and blockchain and NFT garbage. https://t.co/QsPTo4v8nN

Clearly the blockchain announcement has users divided, mostly commenting on two main subjects: the environmental impact this move might have, and the damage campaigns might suffer if associated with crypto scams.

“As a first step, we’re supporting the development of an open source protocol that will essentially create a decentralized version of Kickstarter’s core functionality,” Kickstarter founder Perry Chen and CEO Aziz Hasan wrote in a blog post. “This will live on a public blockchain, and be available for collaborators, independent contributors, and even Kickstarter competitors, from all over the world to build upon, connect to, or use.”

Kickstarter framed this decision as a way for creators to connect more closely to their audiences. Not only that, but the company believes that the new infrastructure overall would make it generally easier for creators to raise funds for their projects. “Backers should be able to easily discover and participate more deeply in projects, better control their data, and have more robust tools to assess the trustworthiness and viability of a project,” Kickstarter wrote.

Creator Richard Meyer had the following to observations:

Other creators in crowdfunding were also pleased with the outcome. It may be hard to understate how upsetting it was to many comic creators to see their indie comics czar having preemptively blocked them on Twitter, but it’s likely balanced out by all the gatekeeping creators that claim they’re leaving now that the platform is moving into blockchain.