Only three weeks before its scheduled release date, the upcoming DC Vertigo title Second Coming was been canceled by the publisher, comic book retailers were told Wednesday. Orders for the first and second issues of the series — in which Jesus Christ is portrayed as returning to Earth only to be appalled by what has become of his teachings  — were canceled with notice that “these issues will not be resolicited,” according to an update sent to comic stores. In the “Second Coming” comic, Jesus Christ was being treated as a failure by God and was sent back to Earth as the bumbling sidekick of the superhero Sun Man.

As we reported weeks ago, the CitizenGO community campaigned against what the comic because they considered it to be a “blasphemous, anti-Christian comic”. The comic was set to be released on March 6 by DC Comics. This comic would ridicule one of the most important men in History, the ‘Son of God’, and the savior of Christians around the world. 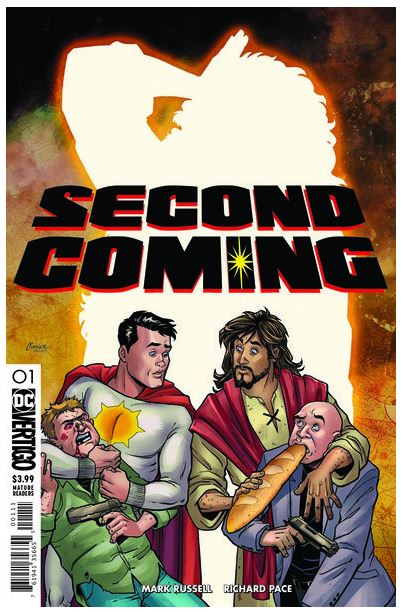 Written by Mark Russell and illustrated by Richard Pace for DC Vertigo, the series made headlines and was quickly labeled by many Christians as “blasphemous.”  Writer Mark Russell mixed in his own idea of Christianity in the comic by claiming that Jesus needed to return to Earth to learn how to become the “true Messiah” from a Superman-like character called Sun-man.

“Witness the return of Jesus Christ, as he is sent on a most holy mission by God to learn what it takes to be the true messiah of mankind by becoming roommates with the world’s favorite savior: the all-powerful superhero Sun-Man, the Last Son of Krispex! But when Christ returns to earth, he’s shocked to discover what has become of his gospel — and now, he aims to set the record straight,” the comic description reads.

Although DC Comics was initially on board with publishing the series, plans changed and a mutual agreement between DC/Vertigo, Russell and Pace was made to drop the comic and go elsewhere.

“The: DC/Vertigo’s cancellation of the orders for ‘Second Coming,’ just so you know, DC did not do anything untoward to me. I asked for the rights back and they gracefully agreed. They’ve been a pleasure to work with and it will still be released, albeit with a different publisher,” Russell Tweeted on Tuesday.

The: DC/Vertigo’s cancellation of the orders for Second Coming, just so you know, DC did not do anything untoward to me. I asked for the rights back and they gracefully agreed. They’ve been a pleasure to work with and it will still be released, albeit with a different publisher.

Russell went on to suggest that DC comics was looking to change something in his series which might have led to the split.

“The cool thing is, this way, we don’t have to change anything.” he continued on Twitter.

There is no further information on the “Second Coming” and whether it will be picked up by another publisher, But the writer assured his followers that the comic will be released since the Superman and Jesus-like characters are already generating a buzz.

Russell is also the author of two books, God Is Disappointed in You and Apocrypha Now. In them, he claims that people have “really misunderstood” the Bible and says the Christian faith “doesn’t really base itself on what [Jesus] taught, particularly in the modern evangelical megachurches.”

So did DC “bend a knee” to the more than 229,000 people who signed the petition, or did they see that pre-sales were so low, it wasn’t worth the controversy to release the book?