Earlier this week we reported on the sexual abuse claims that had been lodged against Vertigo Comics writer, Eric Esquivel who had been garnering some critical praise for his Border Town comic this year. In the days that followed the claim being posted on social media, Esquvel locked down his social media, and no response was forthcoming from DC Comics, the parent company of Vertigo Comics. The alleged victim, toy designer Cynthia Naugle, had posted a statement on her blog where she claimed she had been “sexually, mentally, and emotionally abused” by an unnamed figure later identified on social media — and apparently confirmed by Naugle via several retweets — was Border Town writer and co-creator Eric M. Esquivel.

A few days after we reported on this, both Border Town artist Ramon Villalobos and color artist Tamra Bonvillain released statements via Twitter on the subject, distancing themselves from the project. “The way he treated [Naugle] was disgusting and inexcusable,” Bonvillain wrote, adding, “It shames me to have spent so much time and energy working with someone who is capable of such actions, and I’m sorry if the delay in response caused some confusion about my feelings.” 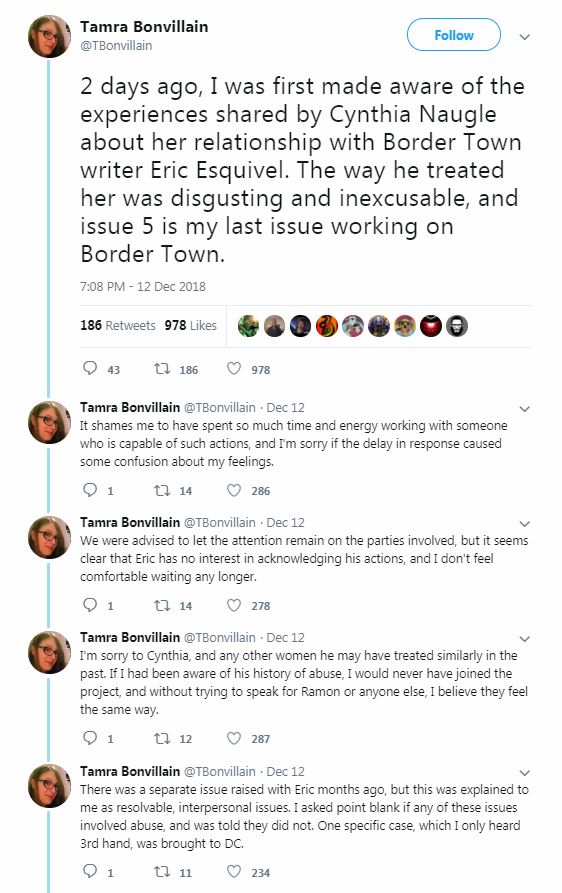 Regardless, I believe Cynthia, I’m sorry for any pain Eric has caused her and anyone else, and I no longer wish to be associated with Eric in any way.

Ramon Villalobos followed by tweeted a lengthy statement, where he said, “Whatever this person felt and experienced is what matters the most and I want to be clear that I think dealing with abuse and making the comics industry a safer place is the most important thing to come from this. To know the art that I’m so proud of, and the world I have lived in and created for the last year of my life had brought so much pain to individuals frankly outweighs the joy I know it brought others and that is going to be something that is hard to reconcile.” 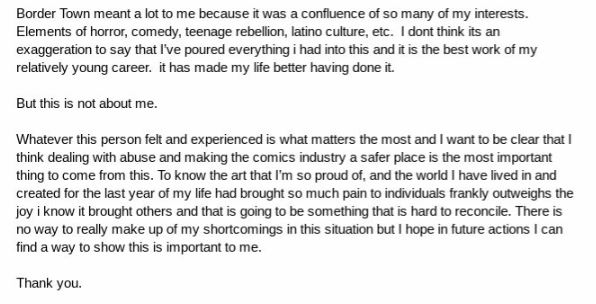 Immediately following these responses, DC announced they were cancelling Border Town effective immediately, with all orders for the still unreleased issues 5 and 6 being canceled, Those issues will not be published, and all issues already released are also being made returnable, according to the publisher.

For his part, Eric Esquivel vehemently denied the allegations when reached for comment by IO9 late Friday night.

“I was recently accused of misconduct by a former romantic partner. Not recent misconduct. Misconduct which allegedly happened many years ago. Out of respect for her and our prior relationship, I will not publicly name names.

I’ve taken a few days to respond, because I wanted to make sure I wasn’t talking over anyone. We’re in the midst of a very important cultural conversation right now. One I wholeheartedly believe in.

Never in my life did I expect that I would become one of the accused. I will not speculate as to her motivation for making these reckless allegations, but I want to make it clear that they are false. Though our relationship was unconventional, we always treated one another with dignity and respect.

I heavily encourage, and will fully cooperate in, any forthcoming independent investigation of these claims, which I am confident will show that I have been falsely accused.

I have been notified that DC Vertigo has canceled the book I was working on. My heart breaks for the book’s supporters, and my creative collaborators. They don’t deserve to be negatively affected by this unfortunate situation.”

In yet another response statement, the comic shop in question, Heroes & Villains in Tucson, Ariz., confirmed in a statement to Entertainment Weekly that Esquivel and Naugle were both former employees, and said that management believed Naugle’s account of events.

“We not only believe her, but we stand firmly behind her in this time of healing, Heroes & Villains has always had a zero tolerance policy for this predatory and abusive behavior. We also refuse to stock ANY publication or creation from abusers, no matter who they might be. We will never stock abusers’ comics or projects. Cynthia’s courage is a beacon to other victims, and we support their ability to seek a safe forum and healing. Not only do we want to create a safe environment for victims to come forward, but we also want to intervene and protect those victims. To that end, Heroes & Villains, in collaboration with Cynthia, is developing a model employee code for other small comic book shops and the comic book community to adopt.”

That’s a pretty damning statement. After all of this, cancelling the Border Town comic probably wasn’t a difficult decision for DC Comics to make.

After all, the book isn’t exactly burning up the sales charts, and seemed to appeal to a specific set of critics who consistently heaped praise on it while other comic readers seemed to find the book politically slanted and its creators arguably racist. Furthermore, DC has had to deal with this kind of alleged behavior in the past, specifically with Vertigo writers Brian Wood and Paul Pope, not to mention Eddie Berganza. It’s good to see DC Comics respond quickly and decisively to this situation. Now if only they would’ve responded similarly a couple of months ago when Vertigo Comics’ artist Robbi Rodriguez was tweeting unsolicited and explicit sexual images to former DC employees on Twitter…