When The Mandalorian debuted on Disney+ last fall, the first episode marked the live-action directorial debut of The Clone Wars and Star Wars Rebels executive producer Dave Filoni. It was a surprising move, especially when the series was also executive produced by experienced director Jon Favreau, who had films like Iron Man and The Lion King remake under his belt. But the first episode drew fans in and helped kick off this exciting new era of Star Wars on the small screen.

So it should come as no surprise that Filoni will again get behind the camera as one of The Mandalorian season 2 directors. 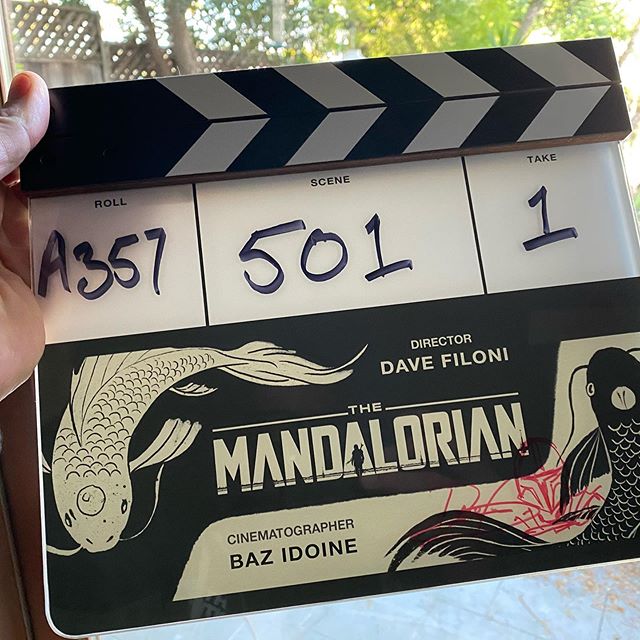 As you can see on the production clapboard, the name “Dave Filoni” is listed as director of whatever this scene was. However, just because this is the clapboard for the final day of production for the second season of The Mandalorian, that doesn’t mean Filoni is directing the season finale.

Peyton Reed is also set to direct 2 episodes of the second season of the Disney Plus streaming series, and Taikia Waititi is once again said to be contributing to the series.  Fans of the series will recall that in addition to voicing the bounty hunting droid, IG-11, in season one, Waititi also directed the finale, bringing his own style of wit to the series. While it is unclear whether or not Waititi will be directing an episode, helping to produce or coming back to voice another character, the message was clear: he’s been working with show runner Jon Favreau on the second season.

For Reed’s part, the seeds for his potential involvement may go as far back as November of 2018 when he, along with Waititi and Joe and Anthony Russo visited Favreau on the set during production of the shows’ first season, pictured below.