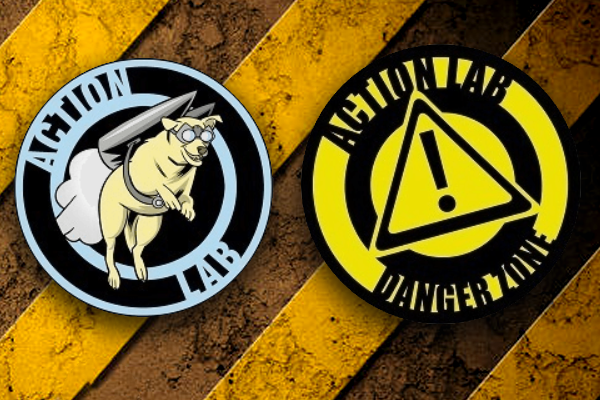 It would appear that Action Lab has literally entered the “danger zone.” Almost 40 comic book creators have recently joined a proposed class action lawsuit alleging that Action Lab Entertainment, the ailing indie comic book publisher, has failed to meet a slew of contractual duties. As reported by ClassAction.org, the 46-page complaint alleges that, despite promising to print, promote, and market creators’ works, report quarterly sales and income numbers, properly maintain social media accounts, and make a reasonable effort to sell comics, Action Lab has largely failed to do any of these things, and even failed to notify creators when its office closed “without reason.”

The lawsuit also asserts that thousands of content creators have been left hanging, and that the Uniontown, Pennsylvania-based comics company failed to put a “large number of projects” into print, retain enough staff to fulfill its publisher agreements, and pay the individuals timely royalties for their work, among other apparent transgressions, between December 2019 and the spring of 2021.

The plaintiffs include John Reilly, the creator of Herald: Lovecraft & Tesla, Jeremy Whitley the creator of  Princeless and Raven the Pirate Princess, the creators of Archon: Battle of the Dragon, Bigfoot: Sword of the Earthman, Baby Badass and Aberrant, among many other titles and creators. The plaintiffs claim that publisher’s agreements for content creators with Action Lab Entertainment were “unconscionable” and should now be declared “null and void”.

According to the complaint, Action Lab president Bryan Seaton, who is also a defendant in the case, left the company in late 2019 without informing the creators, leaving Shawn Pryor in control of day-to-day operations. The Action Lab offices were then closed “without reason” from December 16, 2019 until January 6, 2020, according to the lawsuit, during which time content creators were not paid and no marketing was done. Pryor quickly left Action Lab in January 2020, and Seaton finally informed the comic creators that he “had been incapable of handling the company,” according to the lawsuit. Seaton claims to have quit the next month, leaving Action Lab without a leader.

The lawsuit further asserts that Action Lab stopped down operations again in March 2020 without informing any of its content contributors, and that the defendant “did not perform any work” throughout this time. According to the plaintiffs, all content creators were once again left unpaid. Action Lab’s problems were exacerbated when its distributor, Diamond Comic Distributors also shut down operations in March in response to the pandemic. Action Lab cancelled all scheduled comicbook new releases, stopped distributing sales reports, paid out no money for books sold earlier in the year, then notified creators that Diamond reopened in June 2020 and began shipping new releases that were already in its inventory.

When interviewed last year, Seaton claimed that Action Lab attempted to reopen in July 2020 but was unable to do so until the spring of 2021. Seaton apologized to comic creators in that interview for his lack of communication and “whatever problems our shutdown has caused,” and claimed that Action Lab is “financially very strong and available for business,” but “it takes time to put the pieces together and we need your help,” according to the interview.

According to plaintiffs, Action Lab also did not communicate with creators regarding publishing delays, and frequently outright ignored them, forcing comic creators to have to resort to spending their own money to market and promote their work. They also allege that Action Lab has consistently failed to produce their projects in a timely fashion, frequently failing to publish books on the originally solicited dates, leading to returns, cancellations, and diminished orders from retailers.

“Failing to release a book on time means that it cannot be adequately advertised by creators, who are then unable to schedule signings or events around the release,” the complaint relays. “Creators are not informed of changes to solicited release dates and plans.”

Apparently Action Lab has even canceled entire series because they concluded that the books had insufficient pre-order numbers, and further compounded the problems on the poor accounting of its business. Per the lawsuit, the publisher not only failed to provide creators with promised sales numbers, but failed to share accurate reports that included sales numbers for ComiXology, a digital comics platform which the plaintiffs add, does not promote any current, upcoming or even their back-catalog books.

Despite Seaton’s claims, the proposed class action presents a picture of a comic book publisher that is terminally mismanaged and has allegedly failed to do the right thing by its content creators on even the most basic level.

Clownfish TV had this to say about the situation.

Other indie creators have told us that when they tried to work with the publisher last year, that the representative was slow to respond, and very cryptic in the communications. This now makes sense given that problems the publisher was going through. How much longer will Action Lab Entertainment be around? That probably depends on how this lawsuit shakes out.