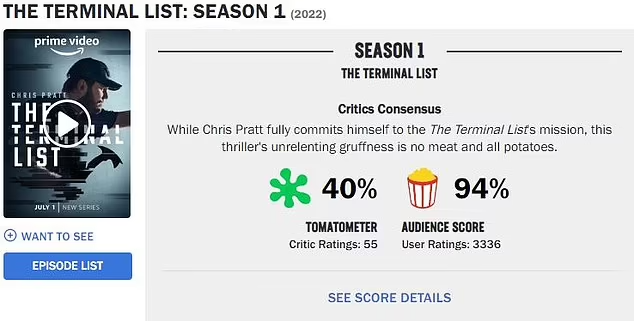 ‘The Terminal List’, the Chris Pratt-led TV series on Amazon Prime may have received negative reviews from critics, but ordinary people are loving it, making it one of the most watched program in the nation.

In the series, Pratt plays a US Navy Seal in the show who returns to his home and seeks to figure out how and why his unit was ambushed and killed. Based on the book by former Navy SEAL and author Jack Carr, the show is based around Pratt’s character, Navy SEAL James Reece, who is willing to go to every extent to figure out who wiped out his platoon, and is taking no prisoners along the way.

While reviewers give the show an average rating of 40% on Rotten Tomatoes, audiences give it an astonishing 94 percent fresh rating. This discrepancy may be explained by Pratt’s candor on his faith, which has earned him criticism from awakened pundits due to his ardent Christianity and his love of hunting. Strangely, perhaps wisely, he has never brought up his political beliefs.

John Nolte of Breitbart said of the show’s success, ‘there is no greater advertisement for a TV show or movie than “It’s not woke.” ‘ The Jurassic World and Marvel’s The Terminal List, has never publicly stated his apparent political ideas, but he has still come under scrutiny for them. And as a devoted Christian, he was attacked by transgender Ellen (Elliot) Page who claimed Pratt’s church in Los Angeles was “anti-LGBTQ.”

The series made its Amazon Prime premiere on July 1 of last month, and over its first full week of streaming from July 4 through July 10, “The Terminal List” raked up an astounding 1.6 billion streaming minutes. The mystery thriller also stars Constance Wu, JD Pardo, Taylor Kitsch, Riley Keough, Arlo Mertz, and Jeanne Tripplehorn.

For comparison, Netflix’s sci-fi teen drama ‘Stranger Things’ outperformed the rest of competition with 4.8 billion minutes of viewing, thus outpacing The Terminal List by a wide margin. However, the data revealed a significant decrease for the show of over a billion minutes, as 5.9 billion minutes had been spent watching it the week before. The Page-starring Netflix series “The Umbrella Academy” came in third on the list with 1.3 billion minutes of viewers over that time period.

With 1.1 billion minutes watched, Amazon’s “The Boys” finished fourth, even though the viewing window included two days for the Season 3 conclusion of the superhero show.

Apple+ Grows Its Market Share as Prime & Netflix Continue to Shrink
Why Are Leftists So Obsessed With Destroying Hero Culture?
Speaking of Bad Adaptations: Neil Gaiman Defends 'Rings of Power'
Amazon Shuts-Down User Reviews for 'Rings of Power' Over "Trolls"
Amazon's New Russo Brothers' Spy Thriller's Budget is Exploding
Diagnosing Hollywood: When Woke is All You Know, It's All You Write
The Boys Season 4: Look Who's Joining the Department of Dirty Tricks