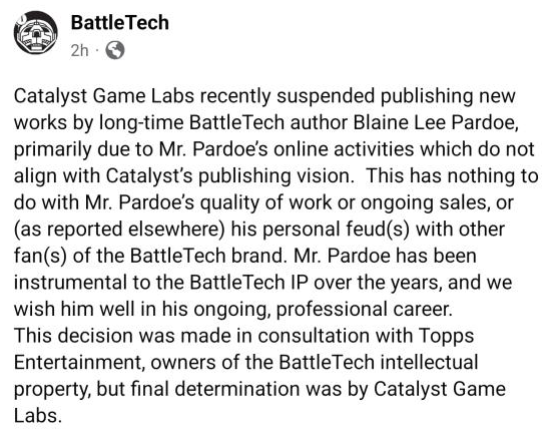 This was no ordinary firing. This is a story about the cancel culture, censorship, and a conservative creator standing up for his rights.  Over at American Greatness, the bestselling author, who’d been writing for BattleTech over 37 years, explained that Catalyst Game Labs “cancelled” him in favor of an anonymous online activist that repeatedly threatened his life over his conservative beliefs.

When my last BattleTech novel, No Substitute for Victory, was released by Catalyst in February, my stalker and a small handful of people once again complained to Catalyst, Topps, and Fanatics. They took numerous statements from my social media out of context to paint me as an “insurrectionist, a seditionist,” and other outright lies.

The smear campaign was led by the man who had threatened my life. I was told that Fanatics asked my publisher to “make this go away.”

My publisher’s solution was to inform me he would no longer publish my work.

I asked if he had verified that the protest was not a handful of people using sock accounts to make their cause appear larger.  He told me he had not checked and that it didn’t matter anyway. It also didn’t matter that the quotes in question had been taken out of context or fabricated.

I noted how other Catalyst contract authors and artists voiced radical progressive opinions far more offensive than anything I had ever posted. My publisher indicated he would talk to some of them. Conservatives tend not to complain, while the Left sees offenses everywhere.

He informed me that my beliefs were alienating half of his customers. I pointed out that sales and ratings for my latest novel were on par with previous works. He then told me that sales didn’t matter.

I offered to write under a pseudonym like several of his other authors. He refused. Then I pointed out the most egregious aspect: “You are literally siding with a person that threatened the life of one of your most productive and popular authors.” Ignoring that, he had assured me that he would communicate his decision to release me to the fans. He never did. 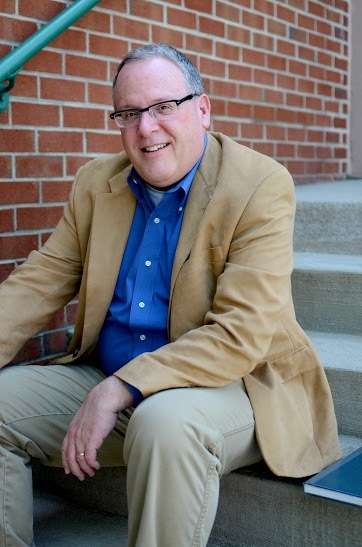 The stalker he’s referring to goes by the name Faith McClosky, and he first reported their behavior in a blog post last summer where he lays out the lies, deceit, catfishing, defamation, and threats against his life.

There have been a small but loud handful of people saying some fairly nasty things about me that are not true. Leading this charge was someone named Faith McClosky. It is important for you to know that Faith McClosky does not exist. “Faith” isn’t a lesbian female planning to adopt children in November. She’s not a nurse. She didn’t attend college in Tennessee. Her background on the net is a web of lies aimed at deceiving people. She isn’t a she. In reality, this is an account of a middle-aged man who I will refer to simply as J going forward.

He worked at big box retailer in a small Pennsylvania town who lives in his grandfather’s house. This person is a criminal who pleaded guilty to issuing Terroristic Threats with intent to terrorize another, and Harassment in a Pennsylvania court in 2020. He’s banned at his former place of employment. This is a matter of public record.

J has been misleading the BattleTech community for several years, pretending to be a young female fan, both as Faith McClosky and as Faith McCarron. Most recently, he has been hiding behind this fake identity to spread damaging lies and falsehoods about me and has made threats against my life, which I take seriously.

For months, this person has been personally contacting people and going on multiple online forums and sites spewing fabricated lies about me. This has been well documented by the authorities and thanks to fans who shared with me some of the hate that he has generated. I have remained quiet on these matters to allow law enforcement and my legal team to do their jobs. That time has come to an end.

You should really read the whole post, it’s shocking, but sadly indicative of the “cancel culture” that today’s corporations are bending the knee too on a regular basis. When corporations are faced with a “woke mob” that want them to part ways with someone they don’t like, they should always default to letting the fans vote with their money, and if his books stopped selling, then Catalyst would have to eventually drop him. It’s the free market.

Fellow sci-fi writer Jon Del Arroz had some insight to this situation because he’s not only dealt with similar situations himself, but he has been following BattleTech fiction for many, many years.

Battletech Creator CANCELED For TRUMP SUPPORT Because His STALKER Concern Trolled his Publisher!

But these totalitarian activists would rather defame someone, and try to force a business to side with their ideological positions and purge anyone in the organization with whom the mob disapproves of. Now Catalyst Game Labs will have to reap what they’ve sewn here. By bending the knee to whiny babies who clearly aren’t fans of their product, they have effectively negotiated with terrorists.

Had the company bothered to even do a cursory review of Faith McCloskey, they might have discovered an activist with a criminal history that’s been targeting Blaine for a while now. When you distill this down to its essence, this conservative author wasn’t fired for his politics. He was fired cause the license holders don’t have the wherewithal to stand up to desperate attacks and lies by anonymous antagonists who aren’t even fans of the franchise or of Pardoe’s work.

Romanian entertainment commenter Vee said the corporation showed their hand back when they put preferred pronouns in the game and had this to say about the situation on his Lack Of Entertainment channel.

Pardoe also makes that point by explaining that now his “many fans will no longer see my work in BattleTech, simply because the publisher feared online backlash. Meanwhile, his extreme left-wing authors can spew their venom without fear of retribution because conservatives don’t whine or threaten or  complain on Twitter. “

Conservatives need to speak with their money by supporting conservative publishers or those companies that opt to ignore the politics of their creative staff altogether.

Publishers that throw conservatives under the bus out of fear seem to have forgotten their core business. They should focus on producing good content and not let the woke mob decide who works for them.

Caving puts the mob in charge of what content you produce. It’s a lesson that both Disney and Fanatics/Catalyst would do well to learn.

After his American Greatness article, Catalyst initially claimed that their split had nothing to do with “Faith McCloskey”, so he posted part of transcript of his discussion with Catalyst’s President on the matter. It’s eye-opening. This decision will only hurt CGL, because as Pardoe says “corporate knee-jerking to a minority of leftwing woke whiners does alienate fans—conservative fans.” And they are legion. There are far more normal, conservatives in the communities, they just don’t wear their badges and preferred pronouns on their sock puppet accounts. It’s unfortunate for the fans of Pardoe’s work, but it’s time to stop giving money to cowardly companies that won’t stand up for their conservative creators.

Check out this longer interview Razörfist did last night with Blaine L. Pardoe, where he makes the case for conservatives to stand up to “cancel culture.”