It’s been announced that acclaimed Marvel Comics writer, Brian Michael Bendis, is leaving Marvel Comics to work exclusively for the “distinguished competition,” DC Comics. Could this abrupt exit be another sign of more trouble to come for the beleaguered Marvel Comics? Bendis is considered one of their best writers, and has been a fixture of Marvel for nearly two decades. His recent work at Marvel had him writing Jessica Jones, Guardians Of The Galaxy, Defenders, Spider-Man, Spider-Men II, Invincible Iron Man and Infamous Iron Man. He had written the Civil War II crossover event, but he did not seem to be involved in Secret Empire and none of his books crossed-over with the Nick Spencer’s failed event. Meanwhile, DC Comics is dominating the comic book bestseller lists these days. Could this be a case of veteran artist abandoning a sinking ship?

Here’s what The AV Club is saying about the move…

In a move that’s sort of like the nerd equivalent of a major sports star leaving his team to play for the crosstown rivals, Vulture is reporting that longtime Marvel Comics writer Brian Michael Bendis has signed an exclusive deal with DC Comics, meaning Marvel essentially just lost one of the most iconic creators working in comics. DC announced the news itself on Twitter this morning, saying he’s been brought to the company with a “multiyear, multi-faceted deal,” and even though we have no idea what he’ll be working on, it seems safe to assume that it’ll be big. 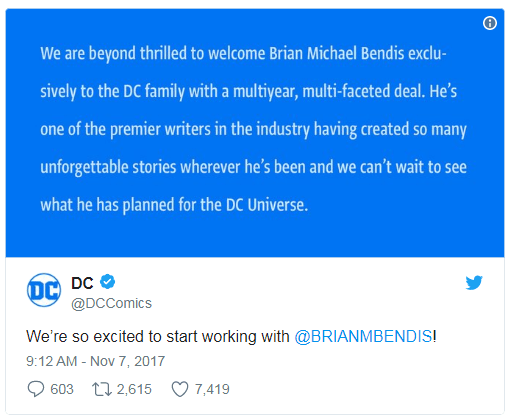 Bendis was at Marvel for almost 20 years, first making a name for himself at the company by co-creating Ultimate Spider-Man with artist Mark Bagley in 2000. That book revitalized the Spidey brand by sending the character back to high school and spawning an entirely new offshoot of the mainstream Marvel universe that saw the creation of other Ultimate versions of Marvel heroes—many of which Bendis also wrote. When Peter Parker was killed off in the Ultimate books, Bendis created Miles Morales to replace him, with that new take on Spider-Man proving so popular that he actually outlived the Ultimate universe itself (literally, because the universe got destroyed).

Spider-Man aside, Bendis also co-created Jessica Jones and wrote for pretty much every major Marvel hero at one time or another, including Daredevil, The Avengers, Iron Man, and The X-Men.

Longtime comic readers may recall that this won’t be the first time Bendis has written for DC Comics.  In 1995, DC Comics launched two quarterly books, Batman Chronicles and Superman: The Man of Tomorrow. Bendis got a chance to author a tale that follows up on an earlier issue of Batman Chronicles from 1998 where Paul Pope did an alternate reality Batman story, with Batman in 1930s Berlin. So it was in Batman Chronicles #21 with the second story in the issue called “Citizen Wayne,” written by Brian Michael Bendis and drawn by Michael Gaydos. The story was a re-imagination of Orson Welles’ classic noir film, Citizen Kane, with Bruce Wayne in place of Charles Foster Kane. Ultimately, the series was abruptly canceled with Batman Chronicles #23.

There are few writers in comics more important to the medium then Brian Michael Bendis and Geoff Johns. And with them both now representing DC Comics, their influence on comics cannot be overstated. Each has been a fixture on top selling comics at the two big publishers for decades while undertaking leadership roles for the organizations and becoming the presumed representative for both of the companies expansions into film, television and video games along with other mediums. In fact, it was Bendis who wrote the Nick Fury scene that appeared in the post-credits sequence in the first Iron Man film.

The deal with DC Comics is being described as “multi-faceted,” so in addition to writing for the comics, Bendis may assist in a much-needed course correction for DC’s poorly received movie universe. With someone considered as one of Marvel’s “top talents” now playing for other team, this situation has surely caught the attention of “Poppa Disney” you can rest assured.

This is a VERY BIG DEAL and signals a seismic shift for the comics industry.