UPDATED WITH DISNEY’S RESPONSE BELOW 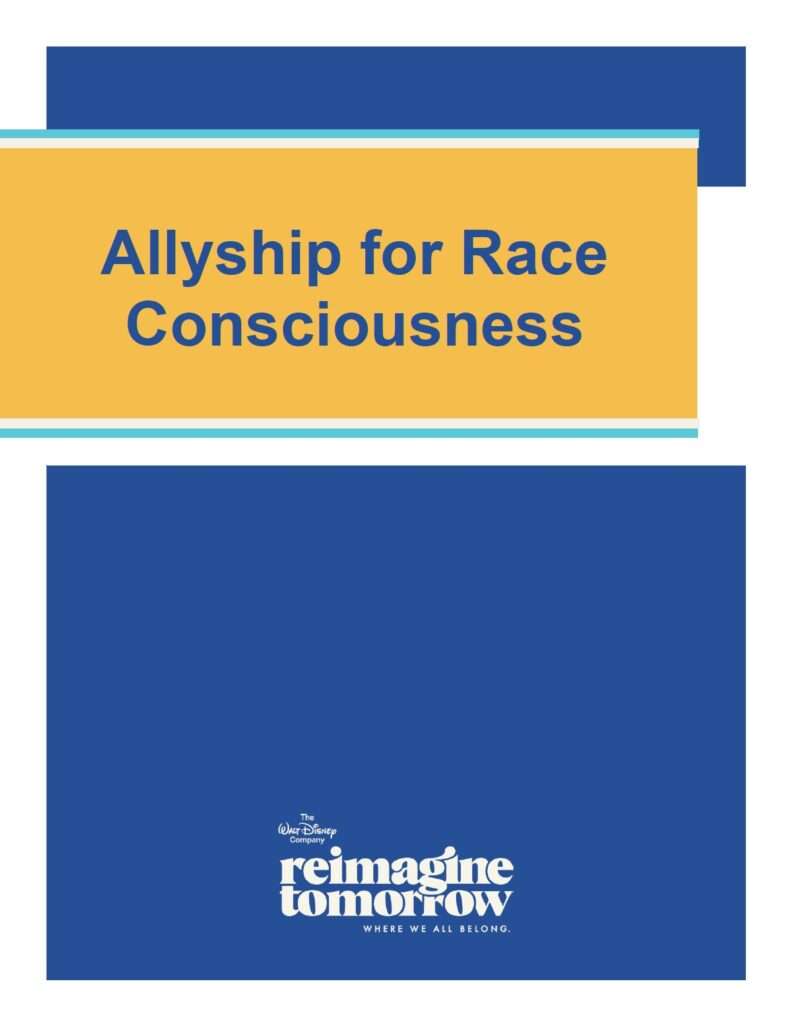 In a shocking report at City Journal, Christopher F. Rufo has learned that the Walt Disney Corporation internally practices critical race theory on a corporate level, has mounted an internal campaign against “white privilege” and organizes racially segregated “affinity groups.”

What Rufo heard from insiders within Disney’s staff was stunning:

“Multiple Disney employees told me the political environment at the company has intensified in recent months. There are “almost daily memos, suggested readings, panels, and seminars that [are] all centered around antiracism,” said one employee. The company is “completely ideologically one-sided” and “actively discourages conservative and Christian employees from expressing their views.” 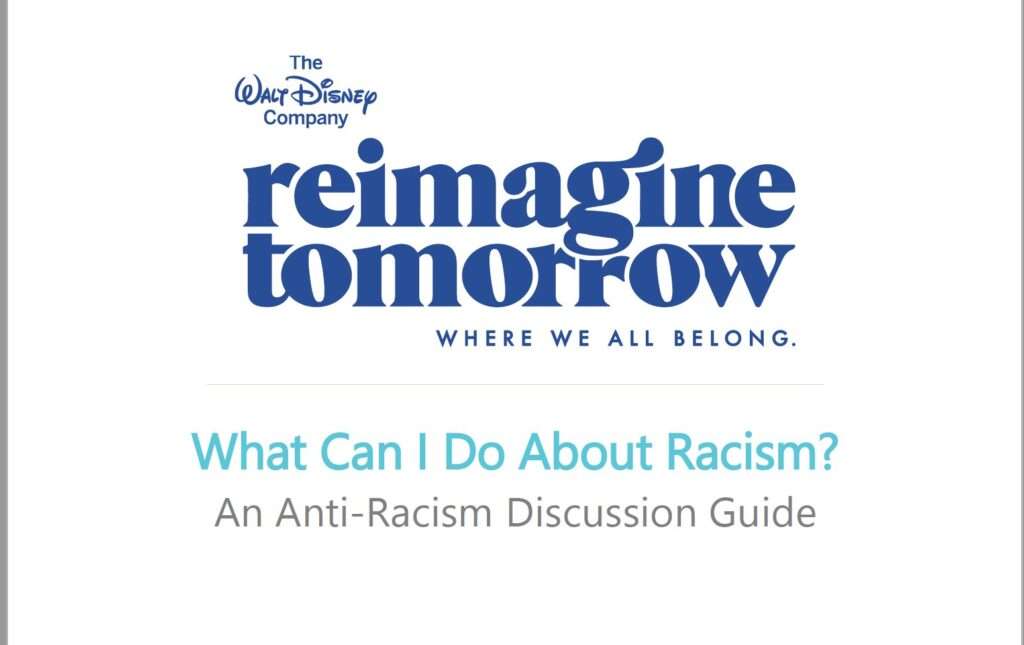 The full 22-page document can be found here.

“If you are feeling confused, shocked, or have recently awakened to systemic racism, recognize that this is probably not new to your Black/African American colleagues,” one message reads.

Disney even goes as far as justifying race riots as “a tipping point and heightened awareness of the movement.” Employees are instructed to reflect on how their race either gives or not gives them “access and advantage.” To that end the document claims everyone has a level of unconscious bias. Disney claims that America has a “long history of systemic racism and transphobia” and tells employees they must “take ownership of educating yourself about structural anti-Black racism” and “not rely on your Black colleagues to educate you,” which is “emotionally taxing.” 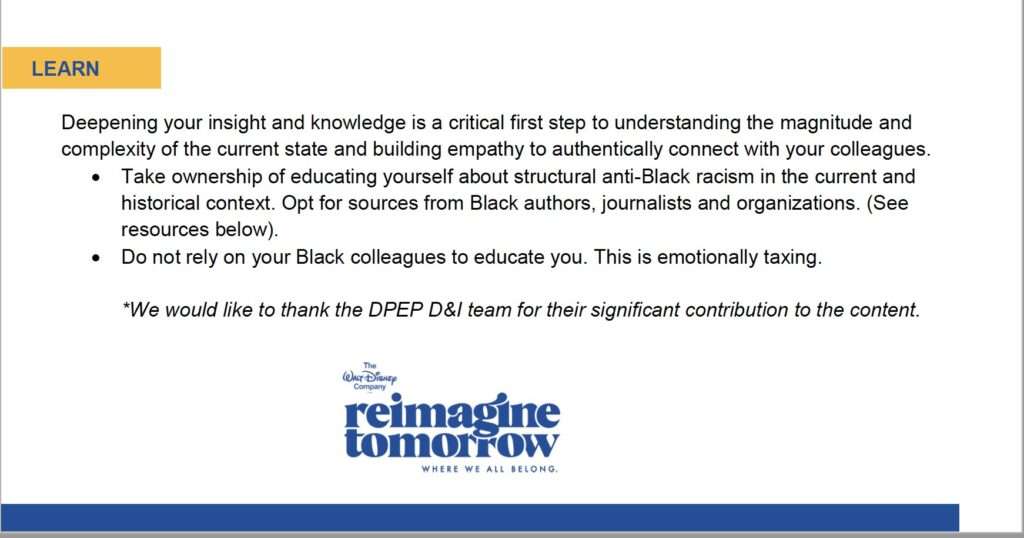 White employees are told to “work through feelings of guilt, shame, and defensiveness to understand what is beneath them and what needs to be healed.” They must “listen with empathy [to] Black colleagues” and “not question or debate Black colleagues’ lived experience.” 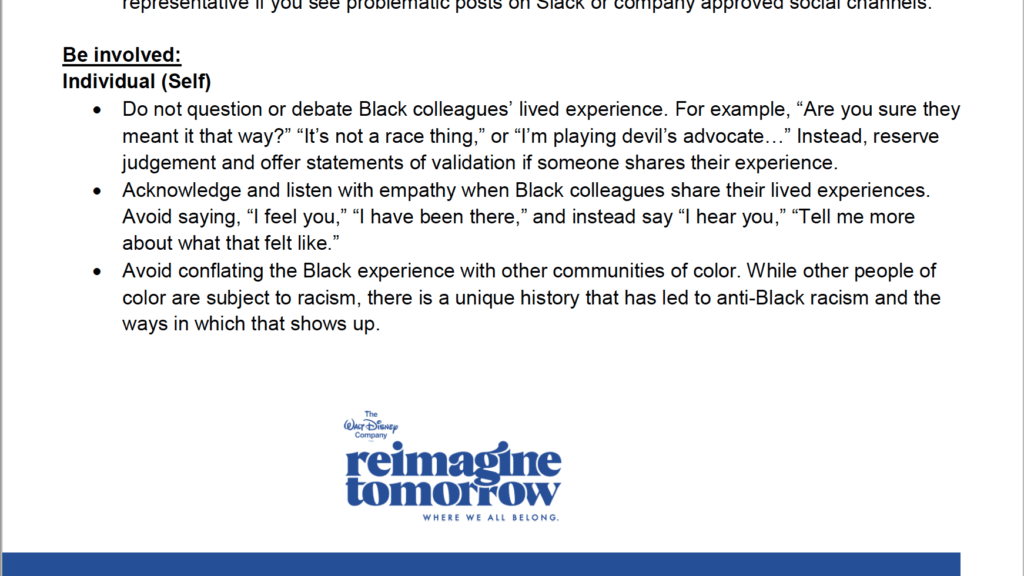 The “diversity and inclusion” program is called “Reimagine Tomorrow,” and in this trove of whistleblower documents that Rufo obtained, a disturbing picture of the company’s embrace of racial politics comes into focus. Multiple Disney employees, who requested anonymity out of fear of reprisals, told Rufo that Disney’s Reimagine Tomorrow program, though perhaps noble in intent, has become very, deeply politicized and has completely engulfed parts of the company in racial conflict. 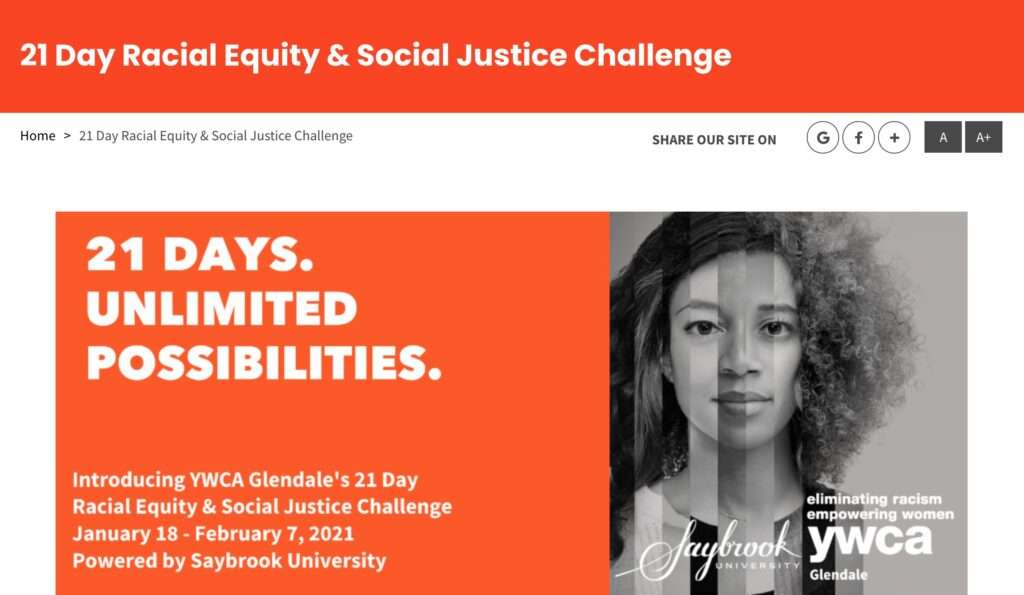 Rufo goes on to report that as part of Reimagine Tomorrow’s programming, Disney sponsored the creation of a “21-Day Racial Equity and Social Justice Challenge” and recommended it to employees. The challenge begins with a lesson on “systemic racism” and tells participants they have “all been raised in a society that elevates white culture over others.” 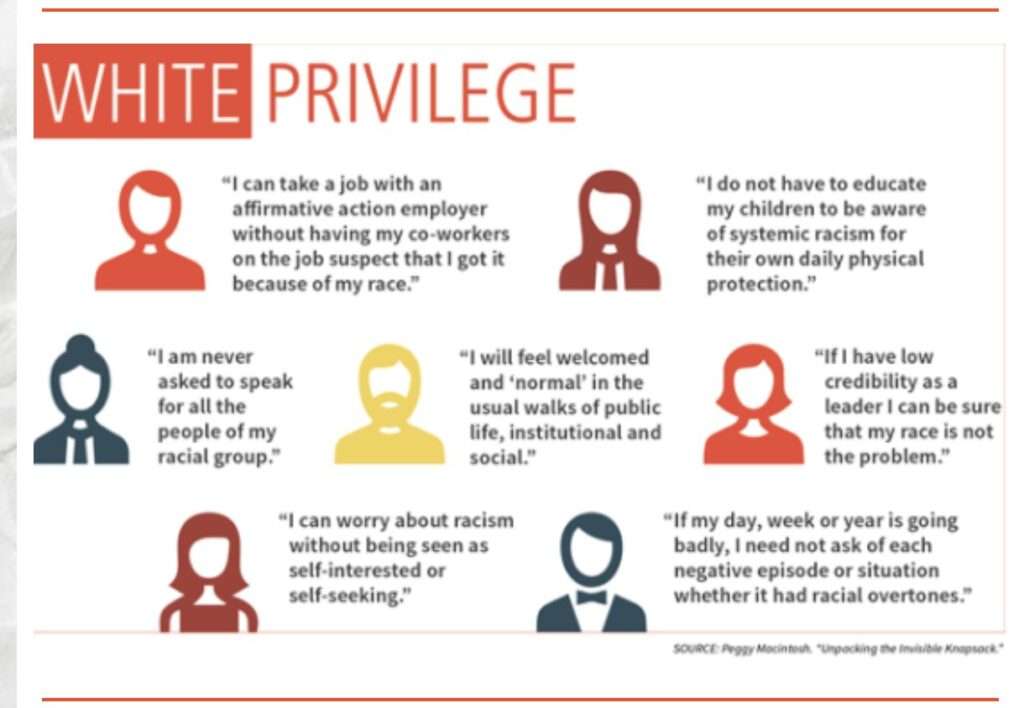 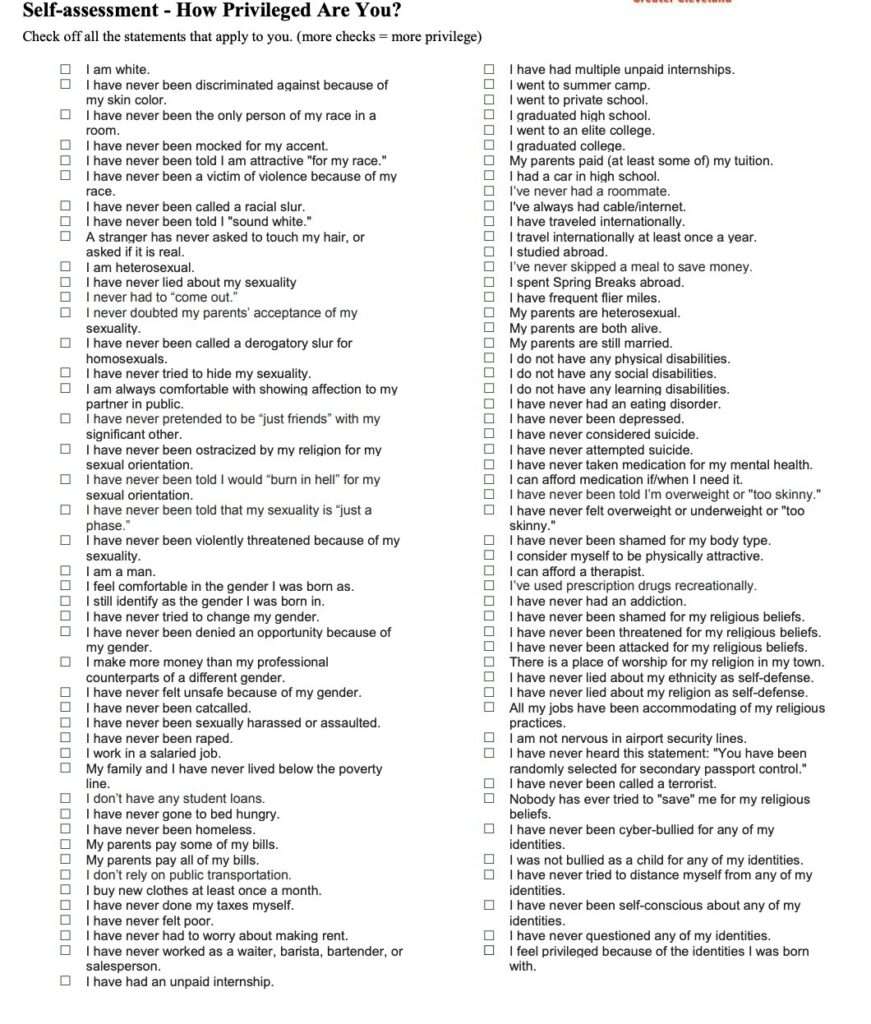 Another activity tells participants to “pivot” from “white-dominated culture” to “something different.” 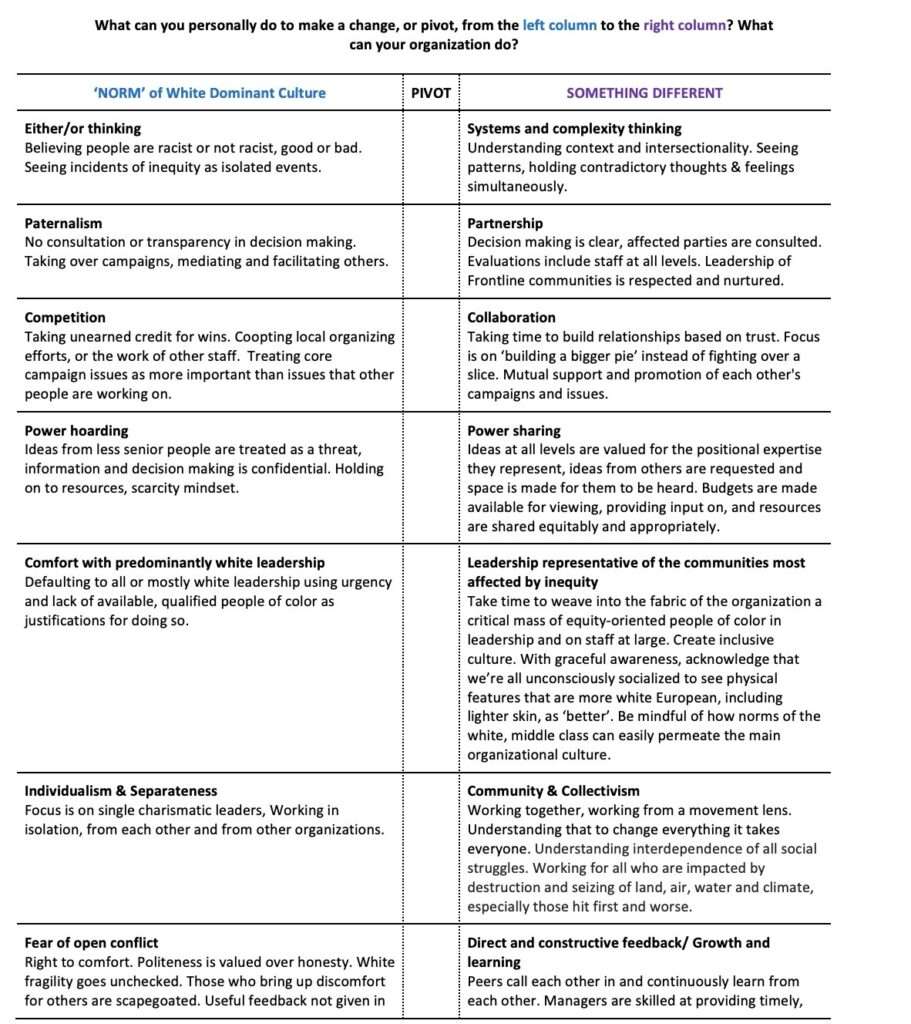 Critical race theory is a contentious issue infecting education systems across the United States. So much so that states like Tennessee, Oklahoma, Texas, and Arizona are pushing to ban it from being taught on the grounds that it’s divisive and polarizing.  It seems to ignore that “Equality” means equality of OPPORTUNITY, which is the foundation of a just society. Their preferred outcome of “Equity” demands an equal OUTCOME for all, which is intrinsically unjust and is at odds with human nature. The bloody history of the 20th century that ‘equality of outcome’ can only be achieved through totalitarian brutality. Is it any surprise then that Disney has been courting the Communist Chinese Party for years? 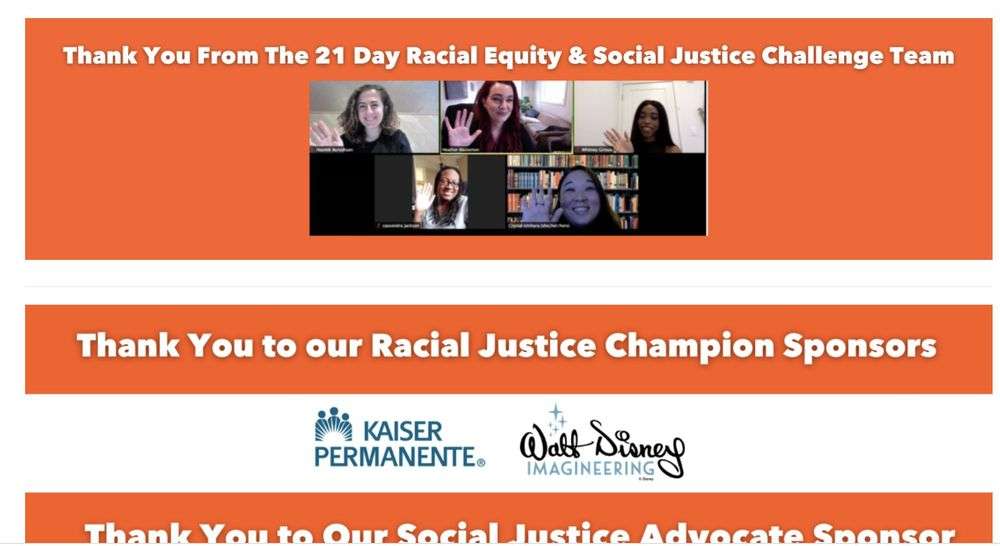 A lot of people have been confused to see family-friendly Disney shifting toward this sort of social justice and identity politics so strongly. But now we know why. Many of our regular readers have seen this festering at Disney for a while. There have been telling moments, such as earlier this year Mandalorian star Gina Carano was fired from Lucasfilm for social media posts that included messaging that urged for unity in our current state of political division. Most recently, Disney’s Lucasfilm and Marvel Comics changed Lando Calrissian into an LGBTQ+ friendly character and will publish linewide gay Star Wars variants. And just last week we learned that Marvel Studios head Kevin Feige explain that Doctor Strange wasn’t included in Wandavision as originally intended because he was a “white guy”.  Even Falcon and the Winter Soldier actor Anthony Mackie said Marvel wants “to change the way society looks at itself.” 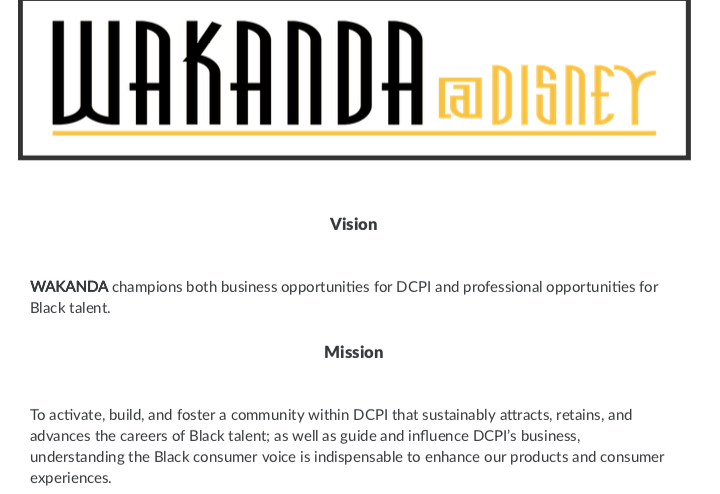 Now that these internal documents have been exposed, it has become crystal clear what has been happening at Disney.  It’s important to remember that this is the same company that filmed their Mulan live action remake in an area where ethnic minorities are still being put in re-education camps, and yet Disney still thanked the very people running those camps in the closing credits of the film. With that sort of history, it may not be as surprising to see them embrace neoracism to appease communists and social justice activists.

Chris: “This corporation hates you, it hates your culture, and it hates the color of your skin.” pic.twitter.com/fYRRT2hxE9

“This corporation hates you, it hates your culture, and it hates the color of your skin.” Christopher Rufo

We could not agree more. Read Rufo’s entire report here. It is damning.

UPDATE: Disney responded to this report with the following statement. 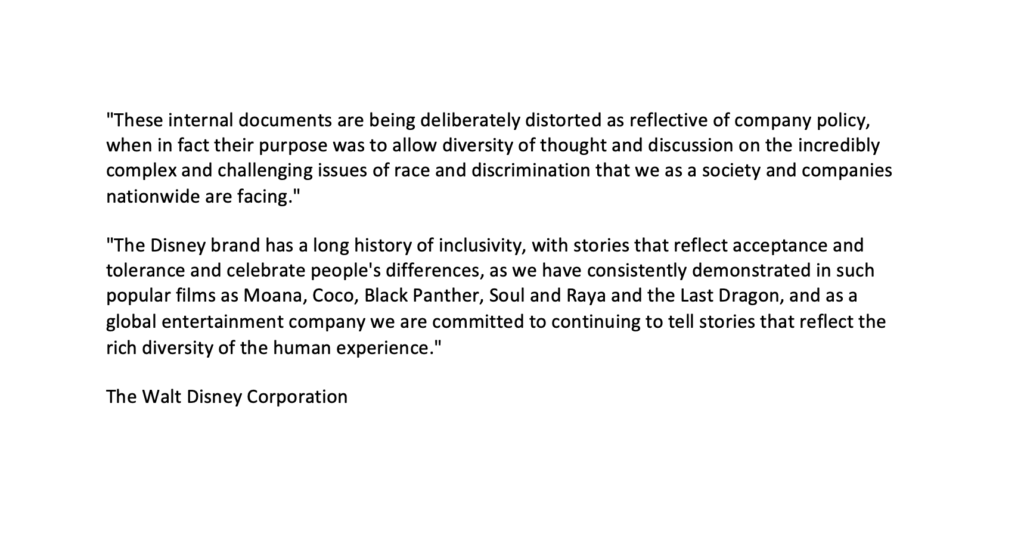 Christopher Rufo, the reporter who broke the story had this to say in rebuttal.

Disney claims to value “inclusivity,” but the company has:

The Magic Kingdom is a house of lies.

Disney’s statement about my reporting is only two paragraphs, but contains eight falsehoods, misrepresentations, and evasions.

Rufo went even further and annotated the Disney statement line by line with his thorough rebuttal. Disney has not issued any further statements. 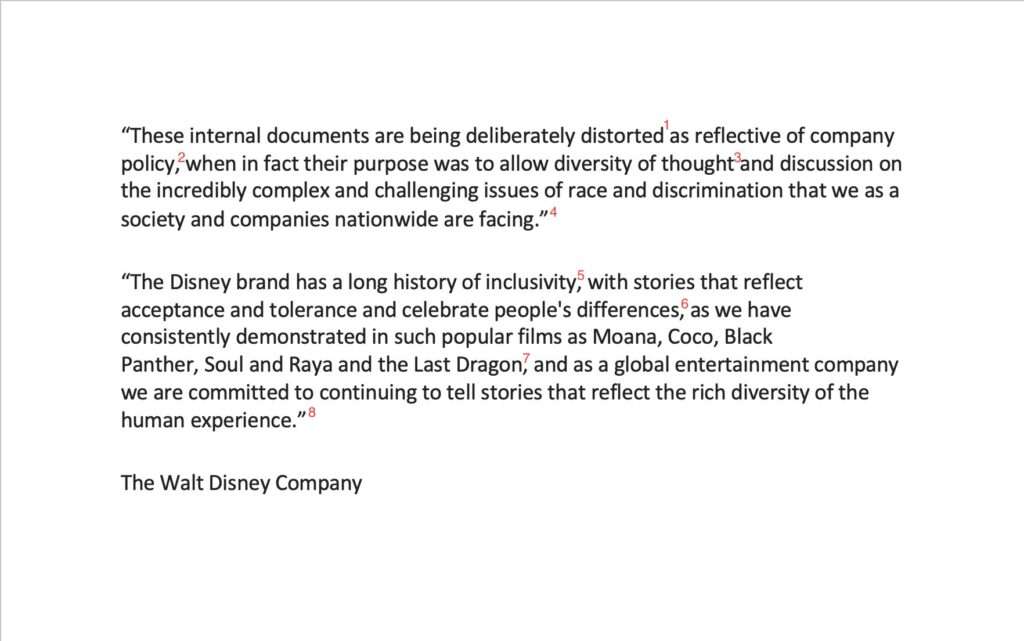 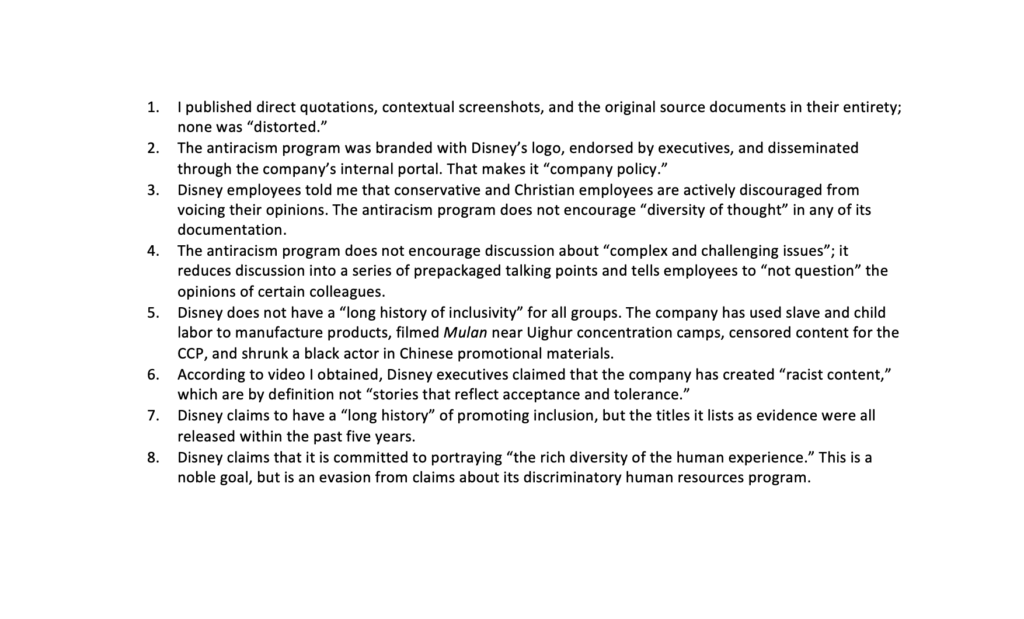 I challenge Disney’s executive team to walk the walk: they should complete the “white privilege” checklist they provided to employees and share the results publicly.

We will update this story if there are further developments. Until then, we leave you with American Thinker‘s Andrea Witburg who said the following after this news came out:

I strongly encourage you to boycott Disney for as long as it thinks its mission, both within the corporation and through the products that it markets to young people, is to promote the fantasy of transgenderism, the lie that America is a systemically racist country, and the eugenic theory that Whites are inherently bad. And if you need a little more encouragement to boycott Disney, just think of all the young Disney stars in the past 20 years who have become complete nutcases because something is deeply wrong in the formerly wholesome, patriotic company that Walt created.