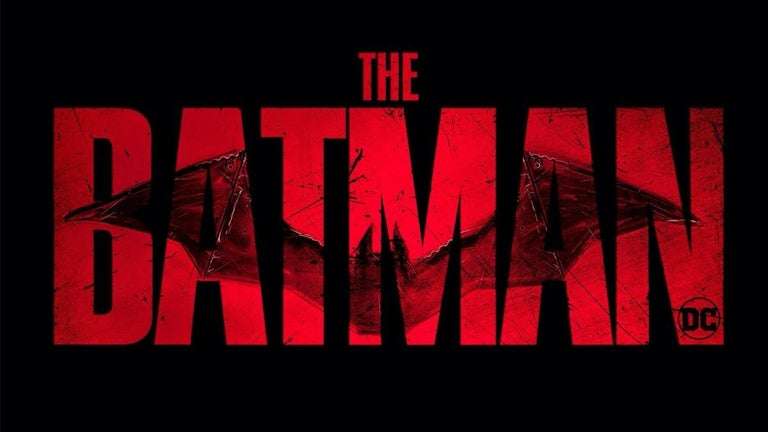 Last month, writer Chris Wozniak, previously employed as both an artist and writer by both Marvel and DC Comics, started making some shocking allegations.  He claimed that in 2008 he sent a solicited screenplay treatment of one of his unused comic book scripts  from the 90’s to executive producer Michael Uslan, whom he had met at the 2008 New York Comic Con. After seeing the film on home video, he believes his script was made almost beat for beat by Matt Reeves and Warner Bros. Pictures for their blockbuster hit film The Batman.

While the movie grossed over $770 million dollars globally, Wozniak says that neither the producers, nor the studio, ever reached out to him or bothered to negotiate any kind of contract to make sure the he was fairly compensated for his original story.

Here’s the first video he posted with these allegations and proof:

BATMANGATE : The Scandal Behind The Screenplay

Wozniak is now asking Batman fans around to world to help him “stop Hollywood from steamrolling yet another comic creator.” Any plaintiff going up against a global movie studio is going to need plenty of funding to mount a serious lawsuit, and to that end, he’s just launched a Change.org petition to try to raise funds for experienced legal representation. It’s on that page where he posted the following timeline of events:

MY NAME IS CHRIS WOZNIAK, former Writer/Artist at DC Comics. Way back in 1990 I wrote a Batman/Riddler plot that I pitched to DC Comics “Batman Office” on and off all the way up until  2017.

THIS IS A PLOT I EMAILED DIRECTLY TO EXECUTIVE PRODUCER MICHAEL USLAN IN 2008
“I have a great story we never got around to doing at DC Comics, but it would make a FANTASTIC BATMAN FILM.”

In 2008 at the New York Comic Con (Jacob Javits Center), Michael Uslan approached my booth because he liked the title of my comic book (Barren Soil, there was a large banner). “I’m a Film Producer. I like the title of your book. Do you mind if I have a copy? I’m always looking for good stories.”

I said, “sure” and handed him one, and he gave me his business card.

AND THAT WAS IT. At the time I didn’t recognize his name.

Shortly after the convention, I Googled him and saw he was the Executive Producer of all the Batman films…and I had a GREAT BATMAN STORY (one of the best ever, I thought) sitting around going to waste.

It was the biggest “No-Brainer” of all time.

I emailed my plot directly to Michael Uslan via the email address on his card.

I never heard back, but I want to clarify that my plot was not sent “unsolicited”. When a Film Producer gives me his card and says he’s “always looking for good stories,” I figure that’s an invitation to send him a good story.

The only problem is he used it.

Now, before Executive Producer Michael Uslan and Warner Bros. Pictures used my plot in the film, they were supposed to negotiate a contract first to make sure I was fairly compensated.

THEY SKIPPED THAT STEP

I was NOT credited anywhere.

I was NOT paid anything.

And In case you’re wondering, that’s NOT supposed to happen.

Initially, Wozniak’s claims didn’t garner a lot of attention, but on Wednesday he posted a second, follow-up video, which seems to further prove his allegations along with additional analysis of the film and his script.  This second BatmanGate “rewrite video” appears to further make the case that his plot was the blueprint for The Batman, and now more Bat-Fans are now becoming convinced of the veracity of his claims, with one commenter calling it “damning proof”.

BATMANGATE 2 : Matt Reeves Did NOT Write an Original Screenplay for THE BATMAN

When asked by another commenter, why he hadn’t already made a lot of noise about this before the film was released, not to mention when it was in cinemas, Wozniak admitted he only found out in June when he got around to watching it on HBO Max.

“I wish I had known. I just saw the film last month on HBO for the first time. I try to avoid spoilers so I can be surprised. Boy, was I surprised this time.”

On an Indiegogo page Wozniak set up to try to raise funding to mount a lawsuit, the writer shared several screenshots of communications with Archie Goodwin, Chris Batista, and Dan DiDio (former co-publisher DC Comics) which appear to support his claims. 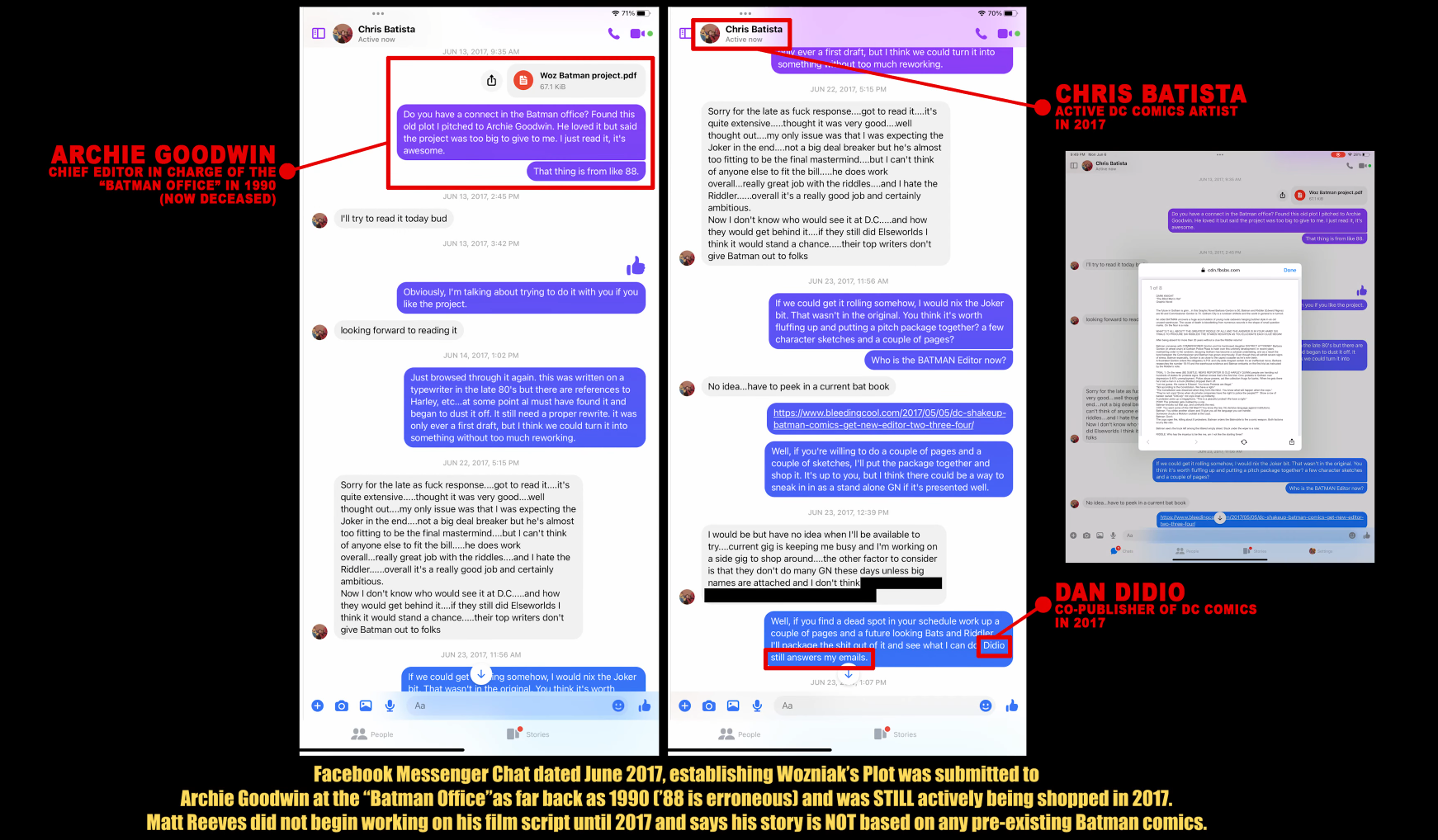 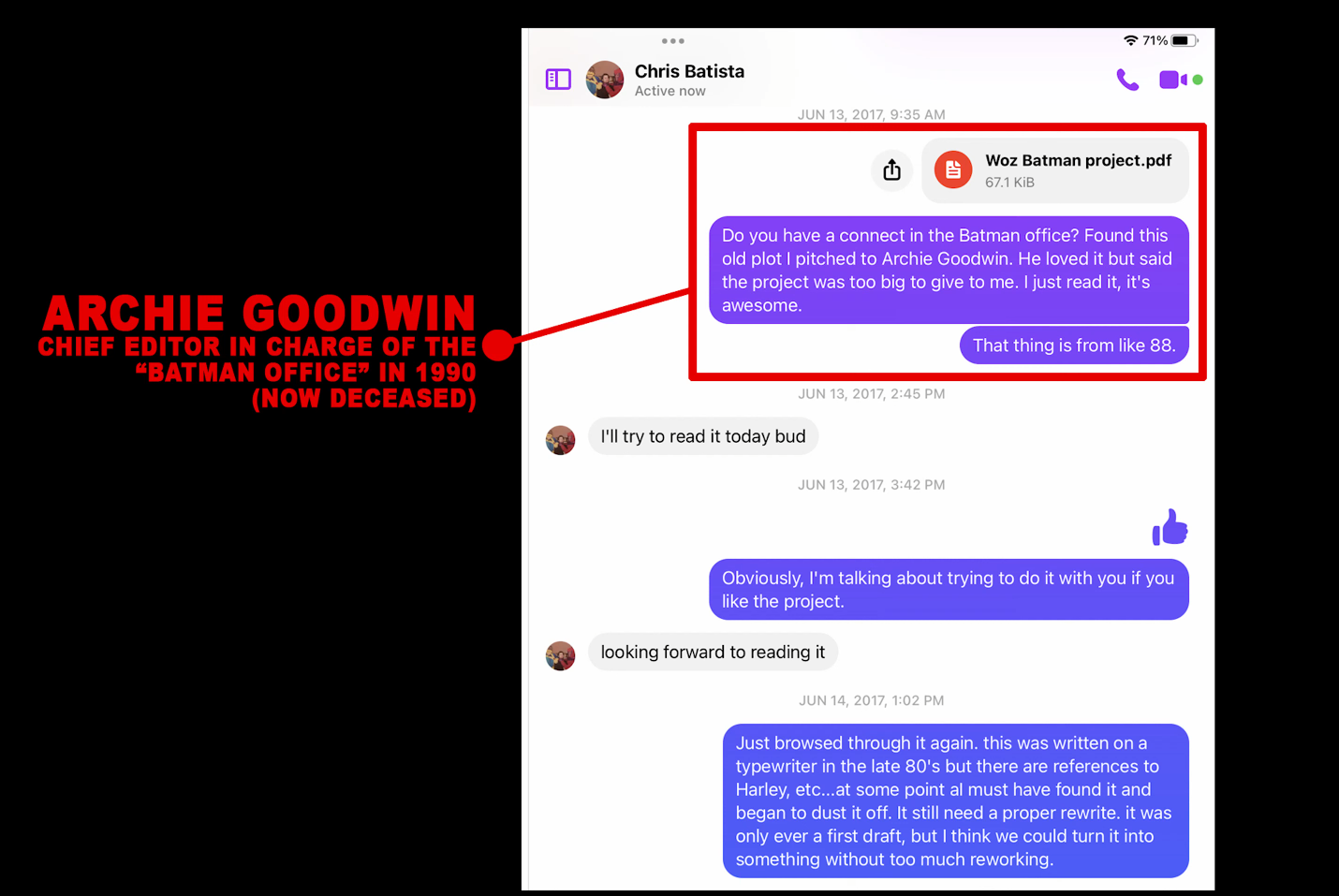 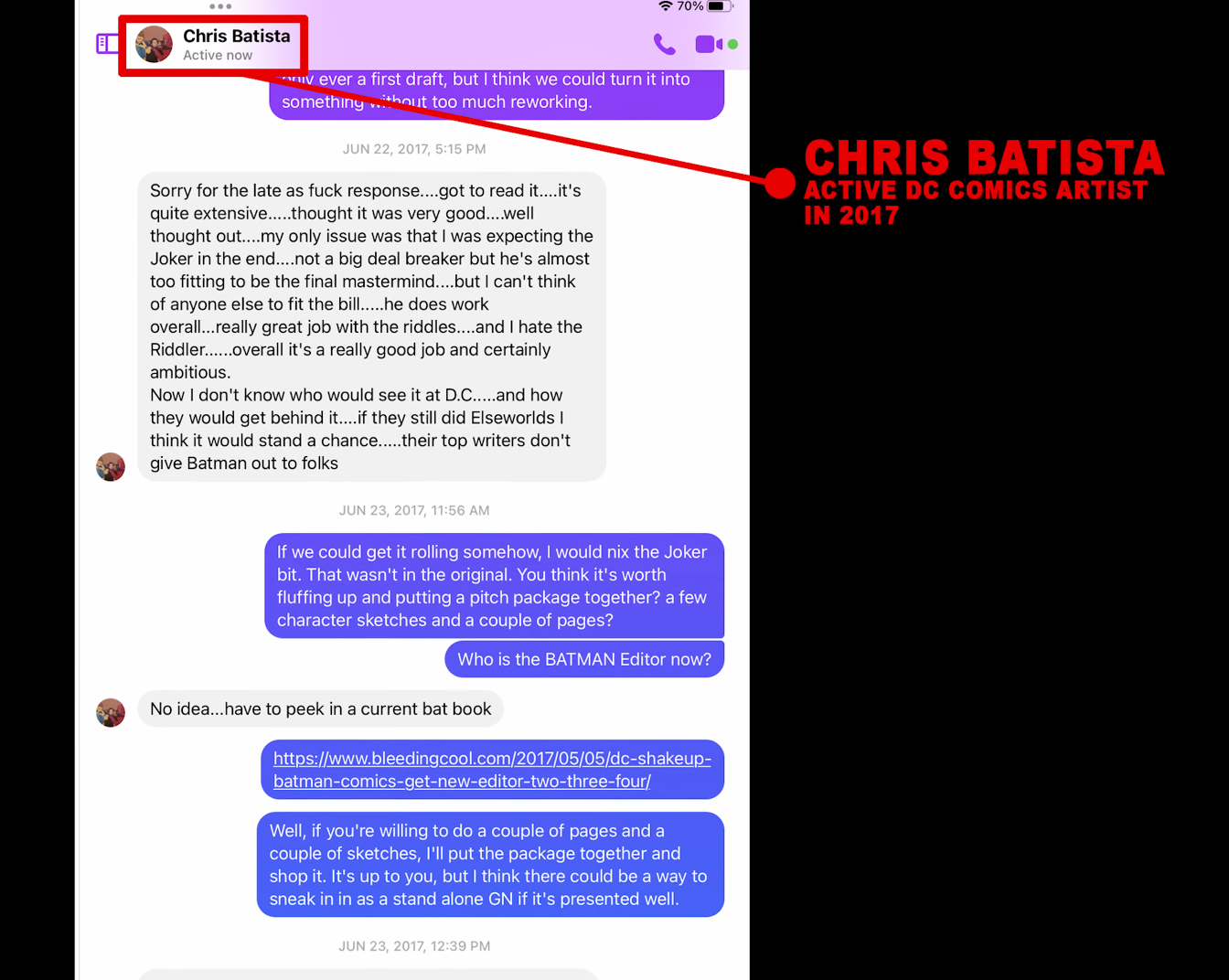 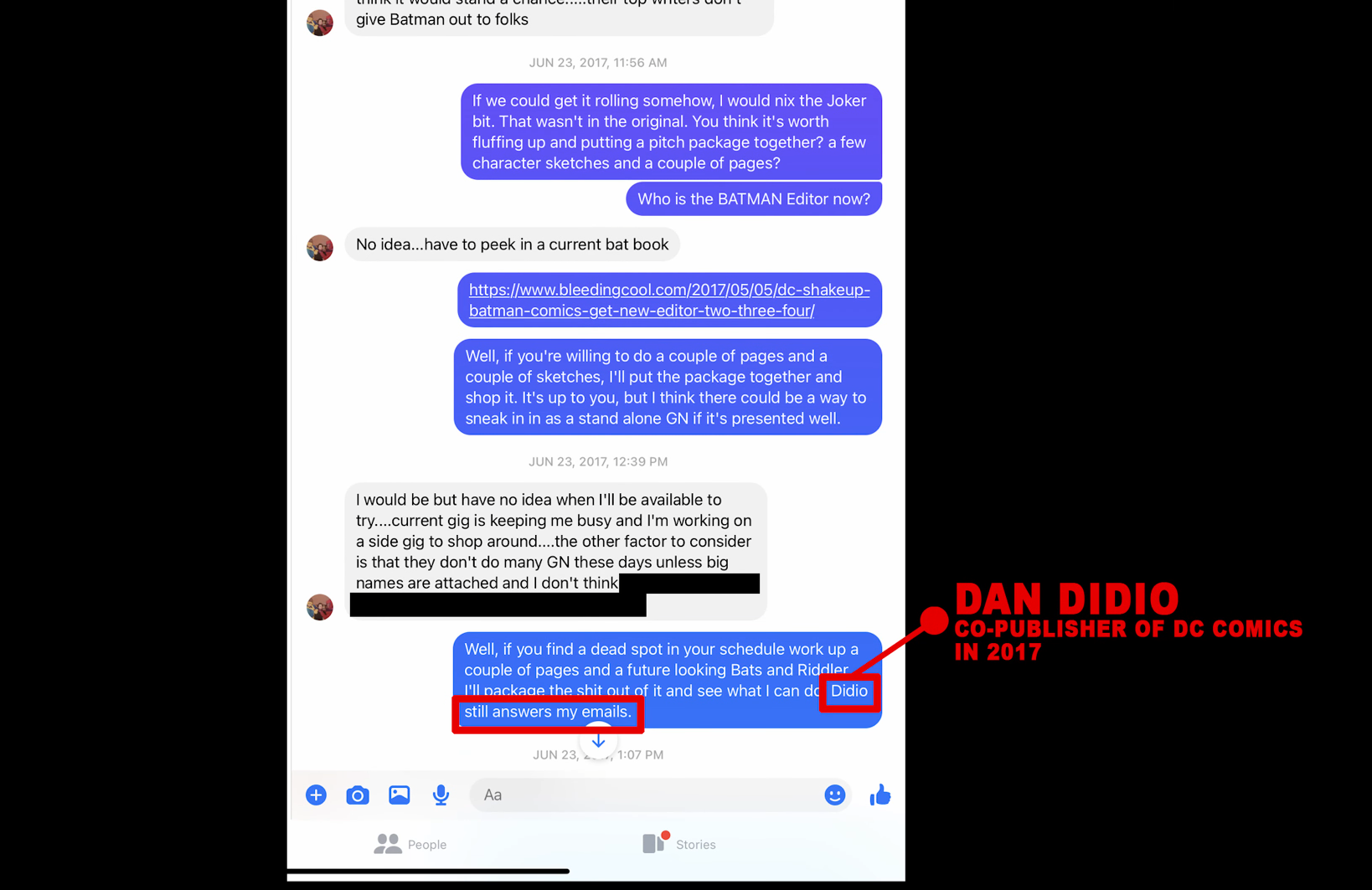 Wozniak also pleads for supporters to help him with what he is convinced will be an expensive legal battle with the studios.

With all the money Hollywood is pulling out of the Comic Book Industry these days, Comic Creators need to be compensated fairly.

For the sake of all future Comic Creators that will have to deal with Hollywood, share the BATMANGATE VIDEO. Donate if you can, spread the word if you can’t. We have families to take care of like everyone else.

BATMAN FANS have the power to make this right.

Bounding Into Comics did a previous write up on this story when the first video was posted, and since that time there has still been no comment from DC Comics, Warner Bros., Michael Uslan, Matt Reeves, or anyone else associated with the production of The Batman. In addition to the Indiegogo and Youtube channel linked above, you can learn more about “BatmanGate” on Wozniak’s Patreon page. 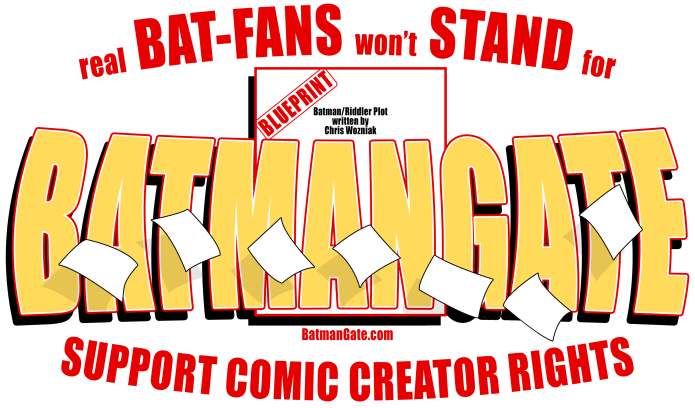