Batman is Inaugural Inductee to Comic-Con Museum Hall of Fame

The Comic-Con Museum has just announced it will hold its first annual fundraising event, The Gathering on Wednesday July 17, 2019 from 5:00pm to midnight, to coincide with the opening of Comic-Con International. The Gathering, held at the Museum’s home in San Diego’s Balboa Park, will be a yearly fundraising event that brings fans together in celebration of their favorite pop culture characters and to preview what is to come at the Comic-Con Museum (CCM). It will also help to raise critical funds for the construction of CCM scheduled to open in 2021.

This special evening will feature an introduction of The Comic-Con Museum Character Hall of Fame (CCM-CHF) and a tribute to Batman, its inaugural inductee. On the occasion of Batman’s 80th Anniversary, a ceremony honoring DC’s most popular Super Hero will be the centerpiece of the event.

Kicking-off at 5:00pm, a “Black Carpet Reception” will allow guests to visit Gotham City inside CCM, complete with displays of authentic Batman props, memorabilia and interactive experiences. Starting at 7:00pm, guests will experience “The Main Event”, the highlight which will be the Dark Knight’s induction to the CCM-CHF and special guest appearances. And to close out the night, at 9:00pm party-goers can dance the night away at the “After Party” featuring immersive entertainment.

“We are excited to announce we have created a new way in which to honor iconic characters from comics and popular culture with the Comic-Con Museum Character Hall of Fame,” said Adam Smith, Executive Director of the Comic-Con Museum, “and we are equally excited to reveal Batman as our first inductee. 2019 marks the 80th Anniversary of DC’s Batman who has become a truly global icon of popular culture.” 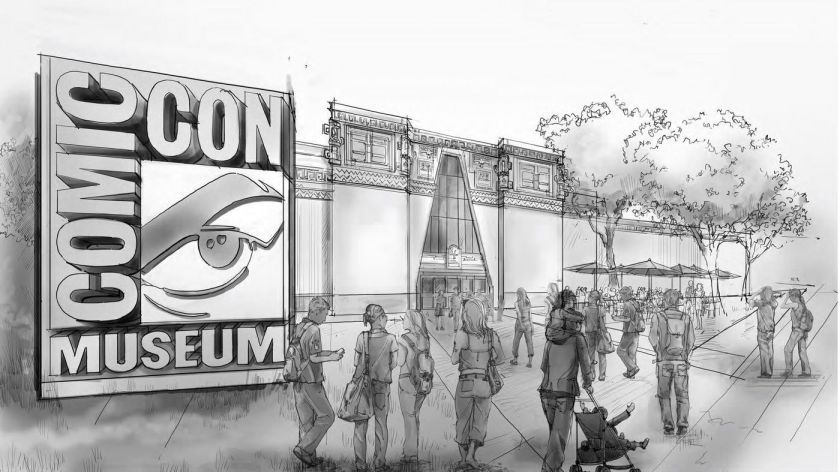 The 68,000 square foot Museum is planned as an experiential pop-culture wonderland featuring rotating immersive exhibits, theaters of varying sizes and extensive educational programming. Open both day and night time, the Museum will cater to the interests and passions of fans of all ages. A common thread connecting those passions are the timeless characters who have shaped popular culture; CCM will pay tribute to them in a key exhibit, the Comic-Con Museum Character Hall of Fame.