During my analysis of July’s comic book sales, I made the not-so bold prediction that Marvel was well positioned to dominate the market. Riding the success of Hickman’s X-Men relaunch, the future releases Marvel Comics #1000 and Absolute Carnage, Marvel already featured a diverse array of ongoing hit comics with Amazing Spider-Man, Immortal Hulk and Venom. “Dominate” was the right word, because Marvel posted the largest dollar market share ever recorded since Diamond began reporting final order shares in August 1997. Marvel owned the comic book market like never before seen in August 2019.

According to data provided by Diamond Comic Distributors, ales of comics and graphic novels to comic retailers in August were down 5.76% compared to August 2018, an impressive mark in a month with one fewer week than last year.  Comic sales were up 0.64% despite the shorter month while graphic novels were down 20.11%.

Year-to-date sales are nearly flat, down 0.26% versus the same period 2018, with comic sales up 0.92% and graphic novel sales declining 3.24%. Marvel’s market share once again reached nearly twice the share of competitor DC Comics.

You can’t find two companies moving in opposite directions faster than Marvel and DC. Marvel is as hot as they’ve been at any point the past 5 years. While DC and the rest of the comic industry sales continue declining, Marvel’s increases are basically holding industry sales at even across the board. Some of this can be attributed to their flood the market strategy. They’ve already released 120 more new comics in 2019 compared to the same time a year ago. But the real difference maker right now is quality. There isn’t a hotter property on the market than X-Men, and their Absolute Carnage event is outperforming all other industry event in recent years.

By all accounts, the overwhelming success of Hickman’s X-Men is a complete shock to Marvel leadership. They never conceived that putting a premiere writing talent on one of their premium IP’s would increase sales and interest to this degree. As they say, sometimes it’s better to be lucky than good.  Marvel’s August dollar sales are up 6% compared to last year and their 46.15% dollar share is the highest ever recorded since Diamond began reporting final order shares. 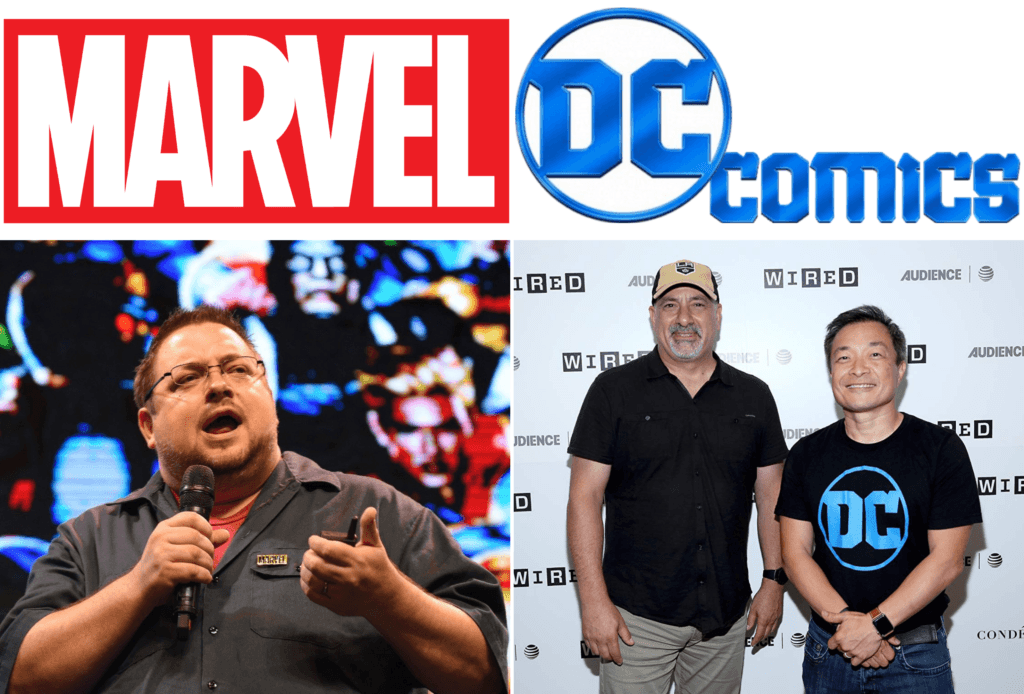 DC on the other hand is ice cold. DCeased and Doomsday Clock are mega hits in today’s market, but both are limited series. DC is having a hard time moving any title not featuring Batman front and center. Their big August debut of Year of the Villain flagship Batman/Superman did great but I don’t believe for a second it’s going to be shipping over 80k issues after issue 2. DC needs Year of the Villain to hit like Dark Knights Metal and that’s not happening. Most readers are waiting for the event to end so their favorite titles return to normal.

DC delivered 64 new comics in August but that number is inflated when you take into account the 12 issues that received card stock variants. They really only released 52 new comics. Thus far DC has released 524 new comics in 2019 compared to 624 at this point last year. If you take the card stock variants from July and August into consideration the actual number of new SKU’s is in the high 400’s. DC’s dollar share of 24.86% is the lowest recorded since October 2015. 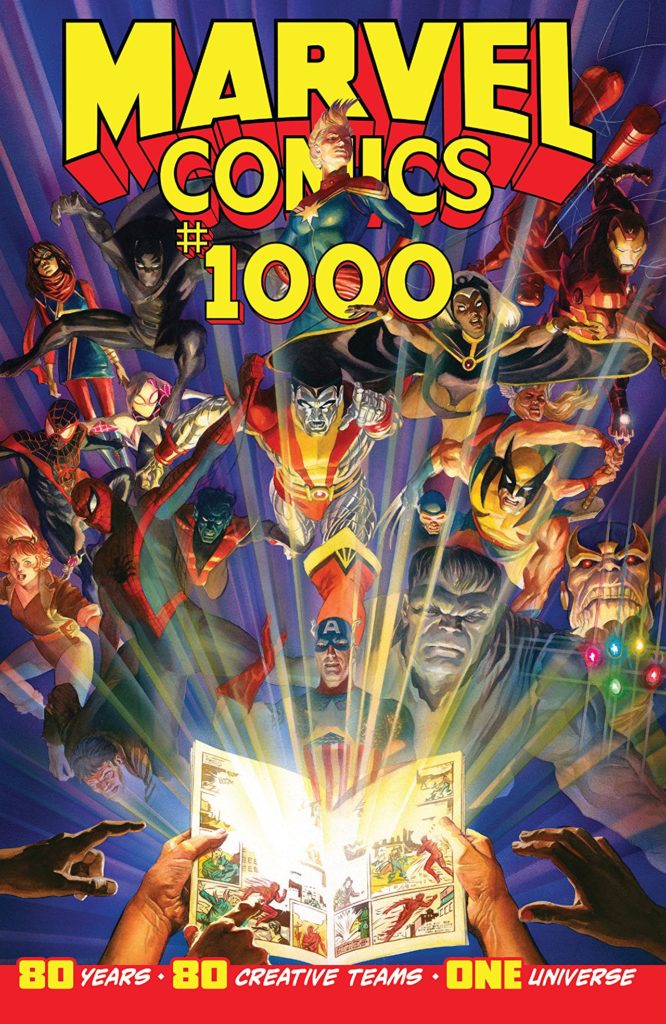 Marvel Comics had an August to remember. Paced by the overwhelming success of Donny Cates Absolute Carnage, Marvel Comics #1000 and Jonathan Hickman’s X-Men reboot. Marvel placed 7 comics in the overall top 10 by dollars sold and units shipped and not a single one of them were priced under $5. Absolute domination on Marvel’s part. 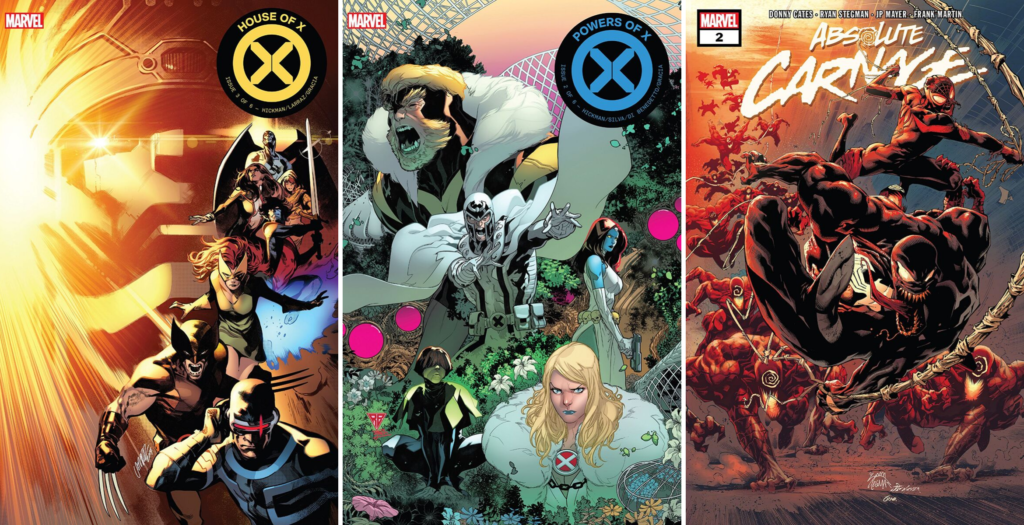 Led by Absolute Carnage’s six associated debut issues, Marvel released a hefty slate of twenty-three #1 issues in total. Some of you may notice Marvel has basically a 50% unit share this month and only a 46% dollar share despite so many premium priced books in August. The answer is overships and lots of them. Venom, one of Marvel’s consistent selling ongoing titles, even received a relatively small 10% overship. Debut comics Spider-Ghost, Future Foundation and Age of Conan Valeria all received a 100% overship in August. 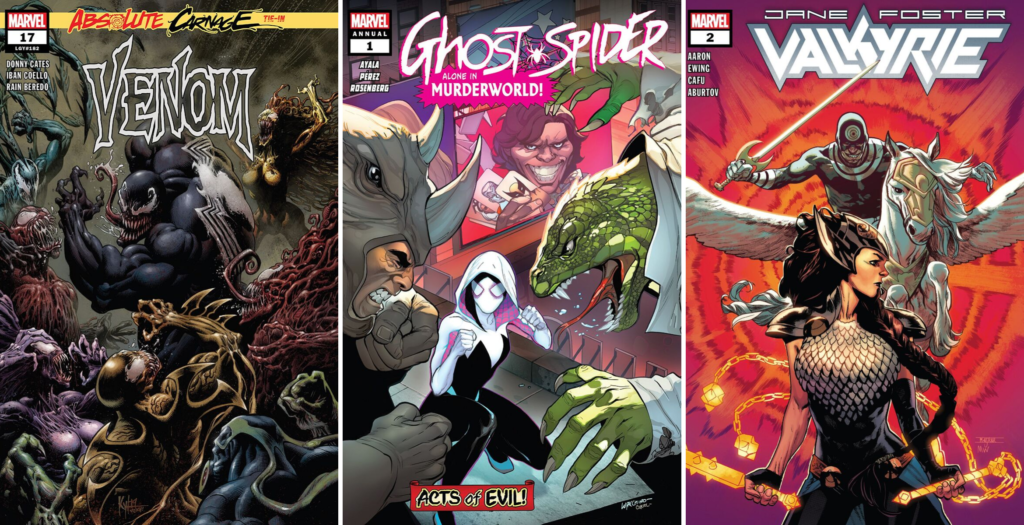 Future Foundation recently cancelled its run at 5 issues despite shipping a healthy 42k issues for its debut. That’s because 42k issues weren’t bought and paid for. It was actually more like 20k and orders for the follow-up issues must have been exceptionally anemic to warrant such an early cancellation. Valkyrie Jan Foster #2 and Magnificent Miss Marvel #6 also appeared to receive 100% overships as well, despite not being #1 issues.

Despite a lighter showing than normal, DC has three titles in the top 10 by units shipped. Joshua Williamson’s Batman/Superman had a fantastic debut, but may suffer due to DC spoiling so much of Year of the Villain. DC desperately needs another ongoing hit besides Batman. Tom Taylor’s DCeased continues moving units like gangbusters, and I expect them to try and milk DCeased for all its worth moving forward. The big news is Batman is once again the bestselling ongoing title in the industry. Turns out Amazing Spider-Man and Immortal Hulk’s numbers weren’t quite what they seemed the last few months. Batman has also seen a slight sales increase due to the start of Tom King’s final ‘City of Bane’ story arc. 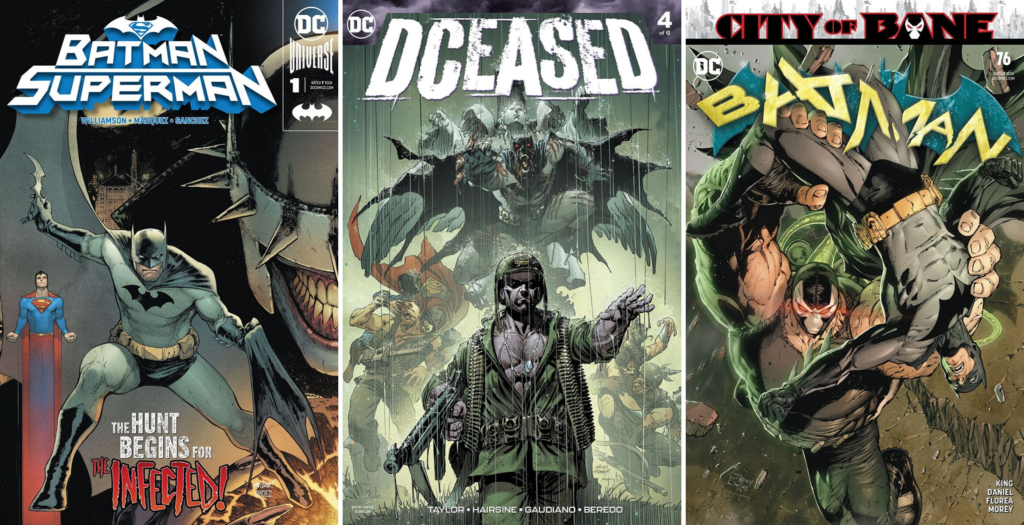 Frank Miller’s Superman Year One Book Two saw a 25% drop in orders from Book One. Still its $8 price tag landed Superman Year One Book Two in the top 5 comics by dollars sold. Sean Gordon Murphy’s Batman Curse of the White Knight is selling quite well. If I had to pick one thing DC is producing right now that could really generate enthusiasm and huge sales it’s the standalone Murphyverse SGM’s been teasing on social media. My one concern is they aren’t striking while the iron is hot like Marvel is with X-Men and Absolute Carnage. I think DC leadership are going to regret no going all-in sooner on the Murphyverse. 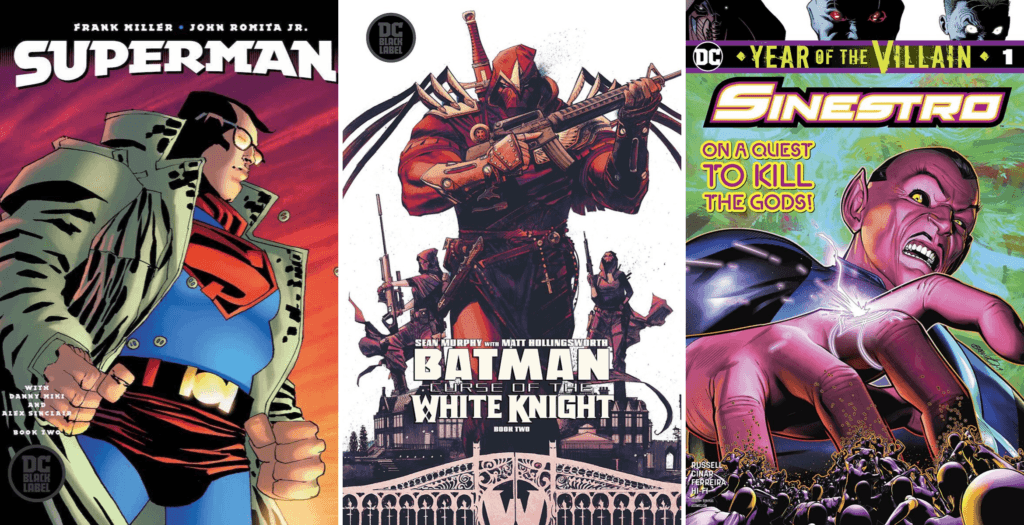 Some may have noticed Marvel Comics Amazing Spider-Man and Immortal Hulk August sales declined steeply from the previous months when they were out-shipping DC’s perennial ongoing king Batman. One reason we saw steep declines for both titles is many comic shops operate on budgets and August was one of the most expensive preorder months in recent memory. Marvel Comics #1000 was $10. Absolute Carnage #1 and Superman Year One both $8. All 4 Hickman X-Men books, Absolute Carnage #2 and Batman Curse of the White Knight #2 were all $5 comics. Some shops likely opened up extra funds for these issues by drawing down their Amazing Spider-Man and Immortal Hulk orders. 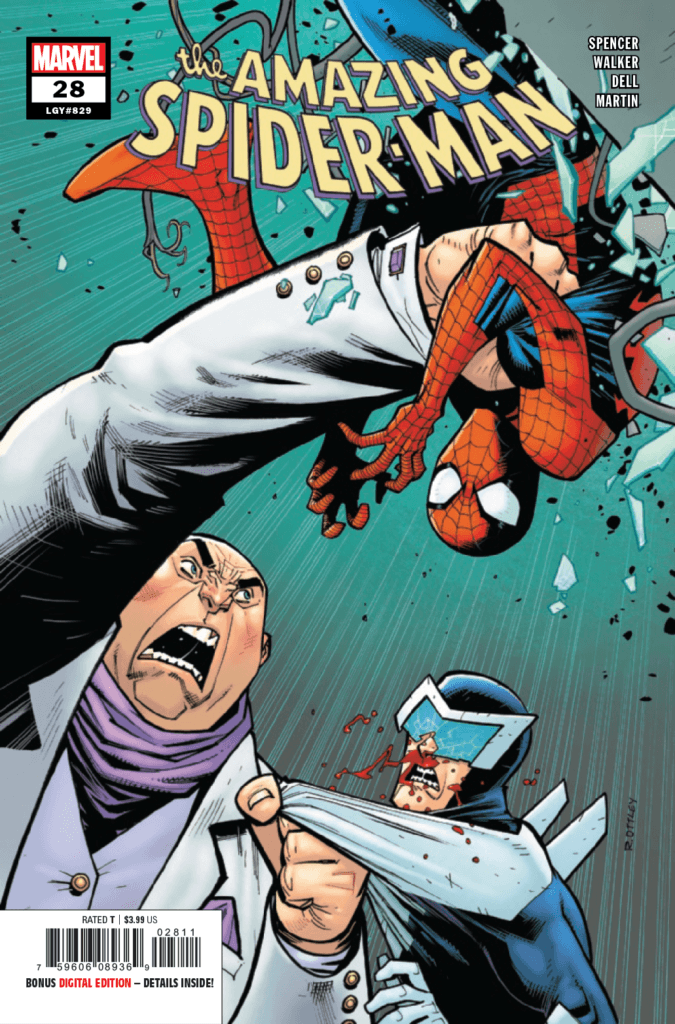 But the biggest factor is Marvel removed or loosened ordering requirements for several connecting variants and “party” variants. It’s crystal clear Marvel’s predatory ordering practices can greatly alter ones perception of the market. Their requirements for connecting and “party” variants increased orders for Amazing Spider-Man and Immortal Hulk upwards of 10 to 30%. These are physical copies LCS’s are forced to buy (knowing they likely they can’t sell) to gain access to limited variants that are far more desirable to speculators and collectors and therefor more lucrative. Marvel Comics abuse their business partners and customers far too often.

Before I wrap up today’s analysis I want to point out what a massive, massive hit Absolute Carnage is. Marvel released seven Absolute Carnage titles and they all landed in the top 50 comics by units shipped and dollars sold. That doesn’t even count tie-in issues from Venom and Amazing Spider-Man as well. Only Scream appears to have benefited from a %0% overship. Likely due to Marvel’s spin-off ongoing Scream title scheduled to release in November. Even if Scream didn’t overship it still would have landed in the mid-30’s by units. This is what Marvel were hoping for from Age of X-Man and War of the Realms. Neither series came close to touching the immediate impact of Donny Cates’ Absolute Carnage. 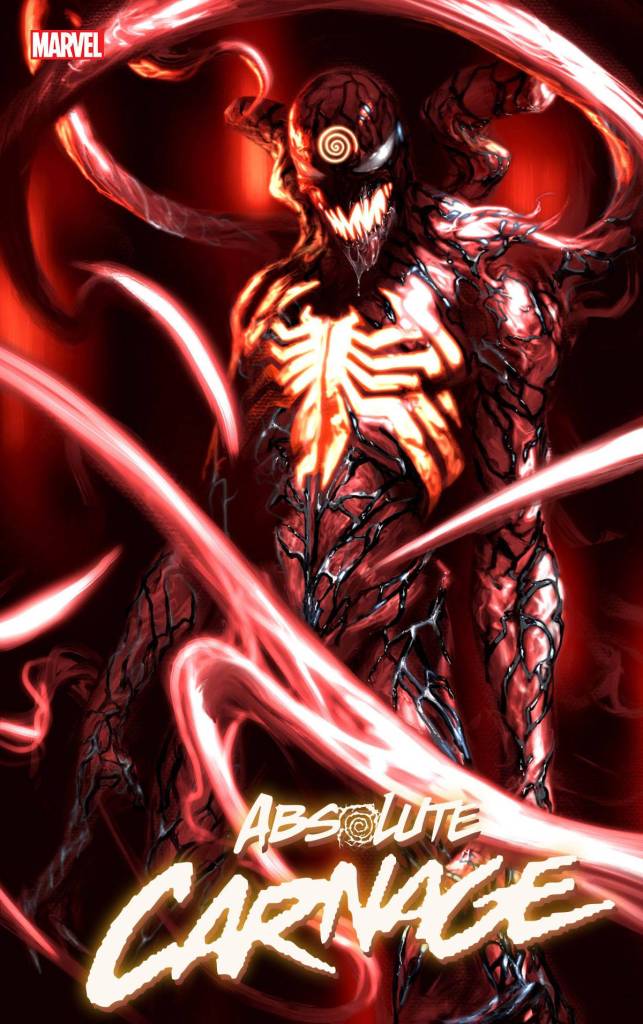 If Marvel is really smart, they’ll move Cates onto the Amazing Spider-Man or Avengers titles when he completes his cosmic work in December. Cates is white hot right now and moves units no matter the titles he’s on. My preference would be Cates with artist Ryan Stegman and Patrick Gleason on Spider-Man. I guarantee that comic would ship well over a 100k issues twice monthly. Pair that with the success of Hickman’s X-Men and DC would be eating Marvel’s dust for at least the next 12 months. Put someone like Ed Brubaker or Grant Morrison on Avengers and there would be nothing DC could do. Not even Batman and Superman could save them. Marvel is exceptionally close to a sustained period of utter market domination.

The bottom line is that Marvel had an amazing month of sales led by Absolute Carnage, Marvel Comics #1000 and Jonathan Hickman’s X-Men. DC’s Batman is still hot but they need another character or title to catch fire soon. It doesn’t appear Year of the Villain is resonating with fans while Marvel Comics heats up month after month. When Absolute Carnage finishes in November they launch their 2099 event. I don’t think it will be as successful as Absolute Carnage but I don’t see anything slowing Marvel down in 2019. If Marvel learns a few valuable lessons from X-Men and prioritize putting the best writers and artists on Amazing Spider-Man and Avengers moving into 2020. It’s gonna be lights out for the rest of the industry for a year or two at least.

For more analysis and a deeper look into the August 2019 comic book sales figures please view my video below.