Artist Billy Tucci, the creator of Shi in 1993, says the FBI’s informed him that death threats were made against him on Twitter:

The FBI visited my home warning that DEATH THREATS have been made towards my wife and I on Twitter. Thank you for your diligence and concern.

This is utterly offensive, and I hope all is being done to track down the perpetrators of this crime on the internet. So now, besides the death threats made against the chairman of Alterna and the Breitweisers, it seems another artist/writer of a conservative leaning is being threatened, and so far, no telling if anybody in the industry proper is willing to speak out on their behalf. If they don’t, they’ve compounded an eroding image for the medium.

I hope Tucci and family are alright, and that whoever committed those obscene acts on Twitter is arrested and prosecuted for the illegal acts they performed online.

Update: here’s another note from Tucci, thanking all concerned:

#ThankYou all for the concern over the death threats made to my family. Sorta just posted it as it’s still sinking in. The FBI knows who he is and consider this a serious threat. Again, thank you all! #peacelovecomics #ilovecomics #iamcomics

I’ll try to keep track of any more news about this case.

Editor’s note: The screen captures from Twitter embedded below were shared with us and were said to be related to this case. We have not been able to confirm the accuracy of these tweets. 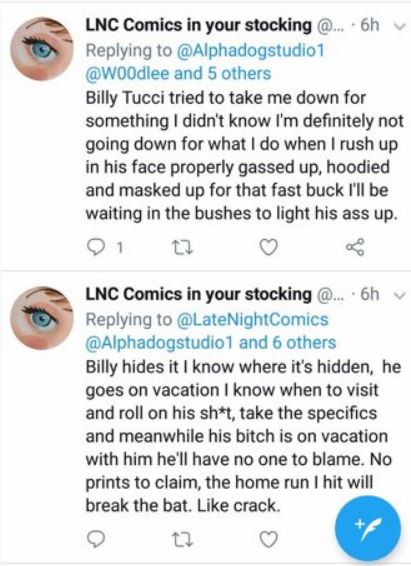 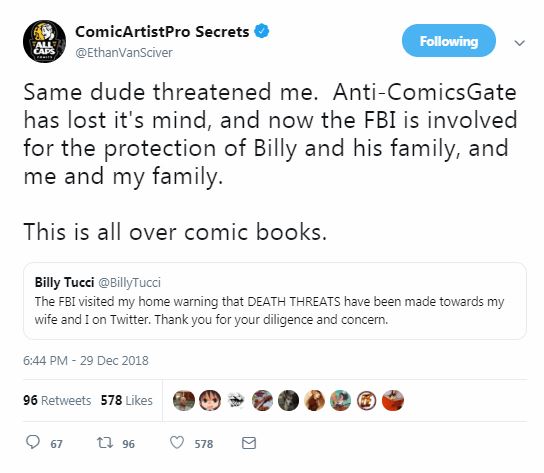 Whether or not Twitter’s newest policies on online abuse will help curb attacks such as these is now a matter of debate, but we at Bleeding Fool do not condone nor endorse violent threats and harassment under any circumstances. We will update you if we learn more about this situation.