It’s been a great year and a half for Apple TV+, especially when compared it to the big streaming content players like Prime Video and Netflix which both respectively decreased by 19% and 14%. Apple TV+ was able to grow in the same period by 29%.

According to reporting by JustWatch, Q2 2022 results were very good for the smaller streaming platforms such as Paramount+, Apple TV+, Hulu, and even Disney+. But the opposite could be said for streaming giants Netflix and Amazon Prime. 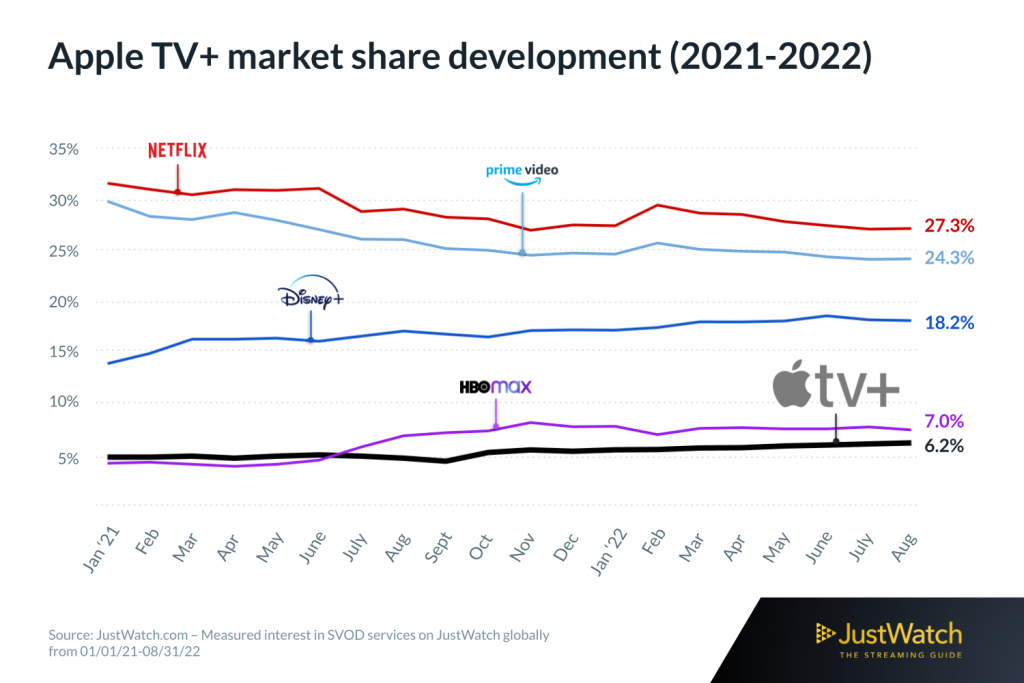 Netflix lost 2% market share in the US last quarter. Although still the most popular, holding on to 21% of the market, they are struggling to retain subscribers. On the other hand, Amazon Prime and HBO Max have both gained a few more subscribers since the beginning of 2022, but both platforms continued to lose subscribers last month.

Here is a breakdown of the market share in the U.S.:

JustWatch also reports that Amazon is only 1% behind Netflix:

The streaming wars continue to heat up, with Netflix losing -2% market share in Q2. Rivals such as Apple TV+, Disney+, and HBO Max capitalized on the losses of the market leader, and each added +1% in Q2. Netflix now only holds a 1% margin over Prime Video, and there is just a 5% margin between HBO Max and 2nd place.

Things are getting worse for Netflix. After airing controversial programming, and raising subscription rates, subscribers are clearly looking for content alternatives. Meanwhile the smaller platforms have no where to go but up.