Dynamite is proud to announce that a third breathtaking depiction of Vampirella by chart-topper and fan-favorite Artgerm will grace not only VAMPIRELLA #6, but also the front cover of Diamond Comics Distributors’ October 2019 PREVIEWS catalog! 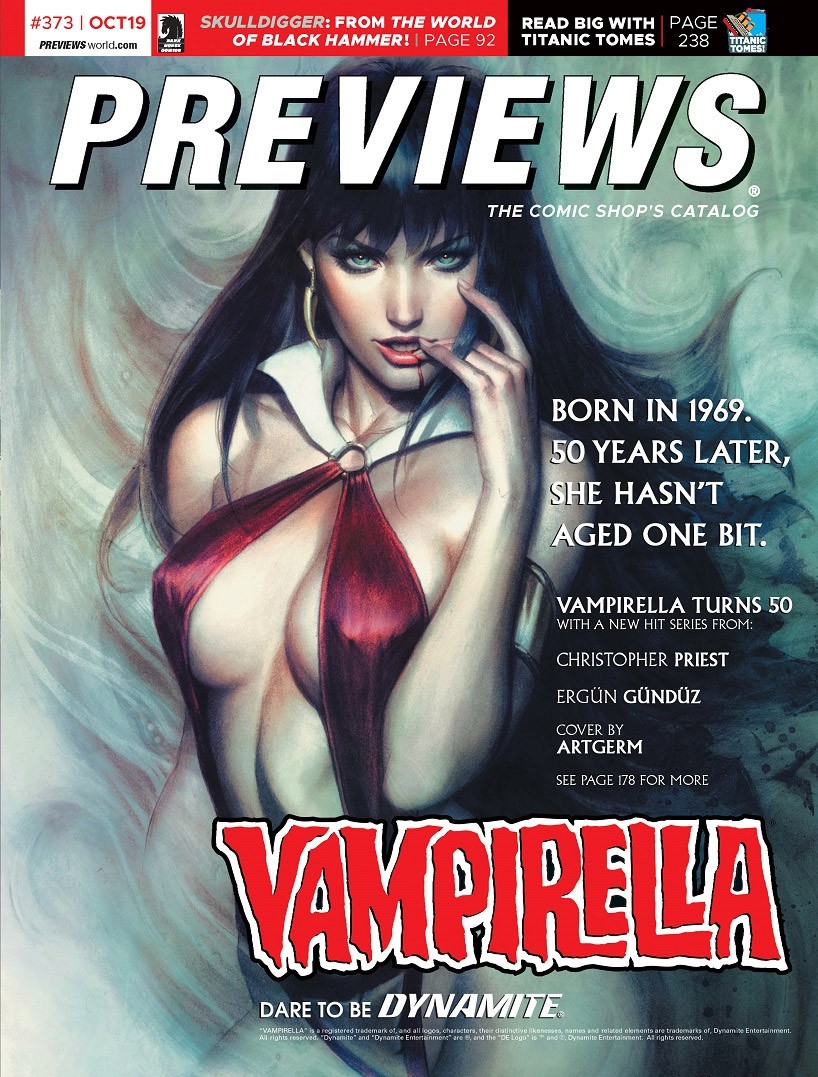 This is the perfect way to wrap up the year, as Dynamite has been celebrating Vampirella’s 50th anniversary since July when the smash-hit new series by Christopher Priest and Ergün Gündüz premiered during San Diego Comic Con. Vampi superfans have nothing to worry about either, as the celebration will continue well into 2020! Dynamite can also update that upon final review, the print run on the first issue actually came out to around 150 thousand!

Check out these process images tracking how Artgerm’s unparalleled vision moved from pencils, to charcoal, to digital paint, to the cover of PREVIEWS! Premium editions of the cover will be available for those fans who want to cherish this work of art in a specific and limited manner. 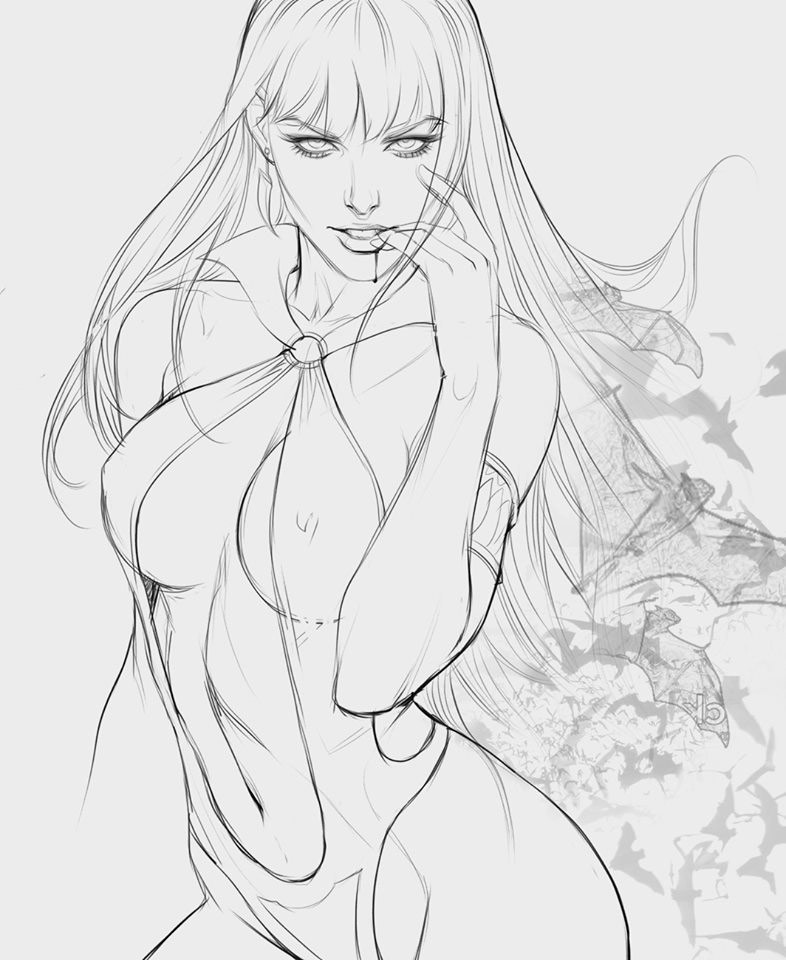 This issue marks Stanley “Artgerm” Lau’s third cover for the series, contributing to every even issue to date. For this piece, he used more traditional techniques than usual with a charcoal layer. Dynamite wanted to highlight this eye-catching cover even more and chose to enhance it with an acetate layer. Typically these covers consist of the logo on the overlay above virgin cover art. Artgerm opted to design the design himself, with a dripping blood effect. Most exciting, Dynamite is keeping the price for this main acetate Artgerm cover at the standard $3.99 so every Vampirella fan can continue their run without worry and new readers can jump right in! 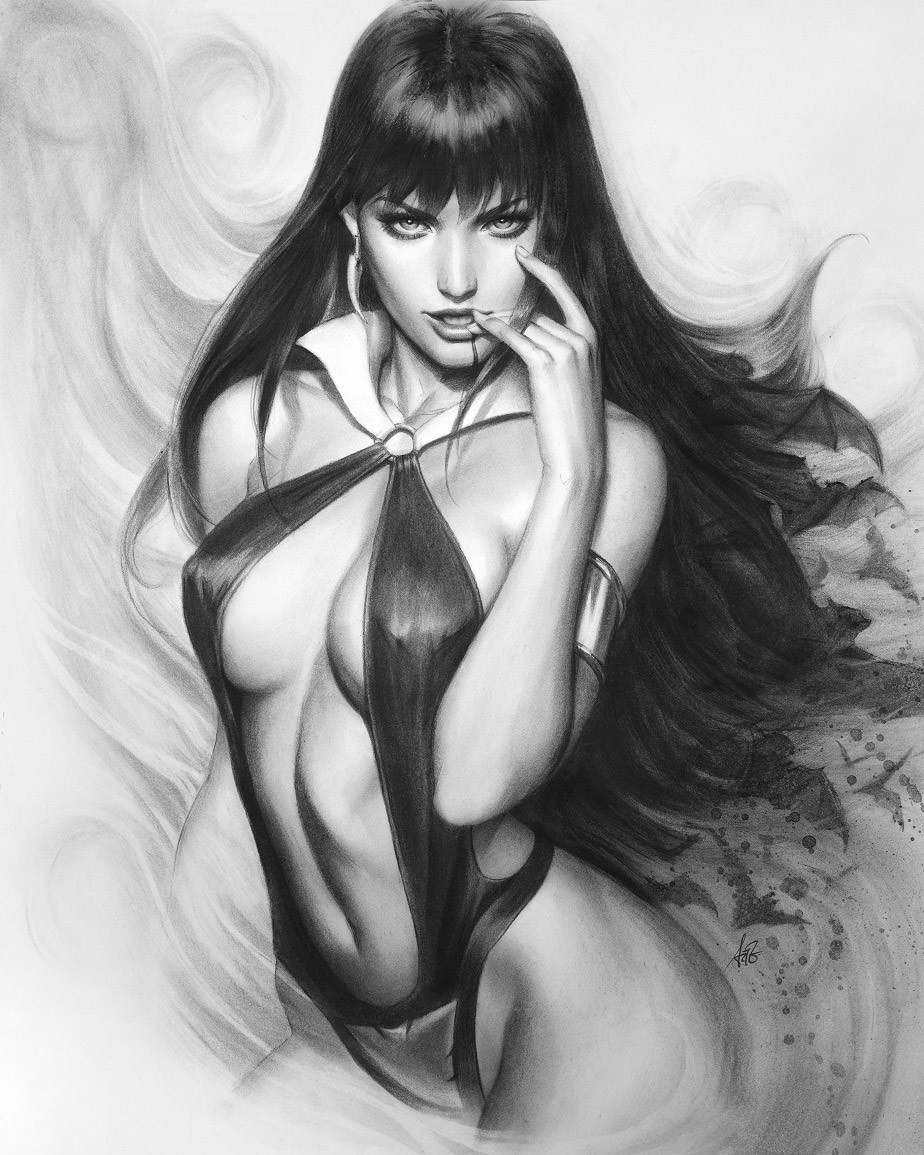 On that note, everyone is welcome to check out the series with this issue! After all, a wise man once said ‘every comic book is someone’s first,’ and Dynamite’s creators and editorial team work hard to make every issue as approachable as the first. Priest is in for the long haul, with his run currently planned out past issue #14, with countless exciting ideas in the pipeline. Of course, there’s always the back issues too and the Free Comic Book Day issue available digitally at no cost! 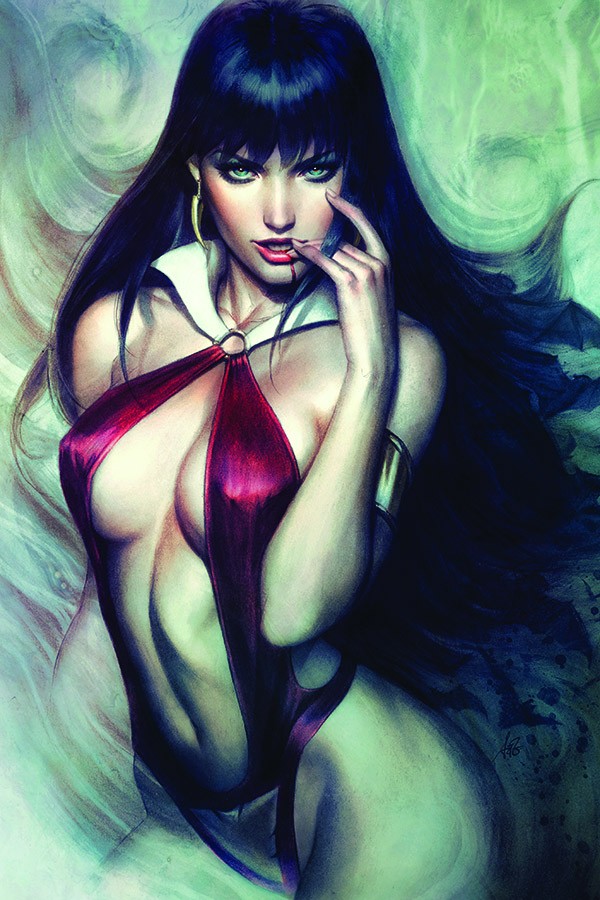 “It’s my pleasure to provide another Vampirella cover for Dynamite, whom I’m extremely delighted to work with,” said artist Stanley “Artgerm” Lau. “This time I’ve decided to approach the cover with charcoal – a medium that I don’t use often for commercial projects, except those I truly love. Thanks to the fans for the overwhelming response on my previous Vampirella covers and it is my privilege to have this image on the front of the PREVIEWS catalog for the comic industry.”

Other covers for the issue include Guillem March, Fay Dalton, Ergün Gündüz and a photo featuring cosplayer Lua Stardust. As well as a range of incentive covers, including ones from “Icons” Adam Hughes and Frank Frazetta. 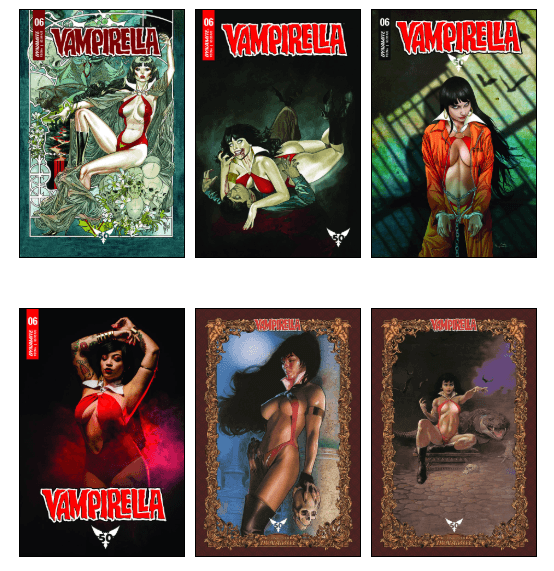 Also releasing is the Vampirella Window Cling. Perfect for retailers and fans alike, one can advertise Vampirella wares or show off their fandom. The 20 by 8 inches multi-surface stock is able to be used on glass, metal, plastic laminate and other surfaces – even outdoors! The adhesive is effective, longlasting, reusable and leaves no residue. 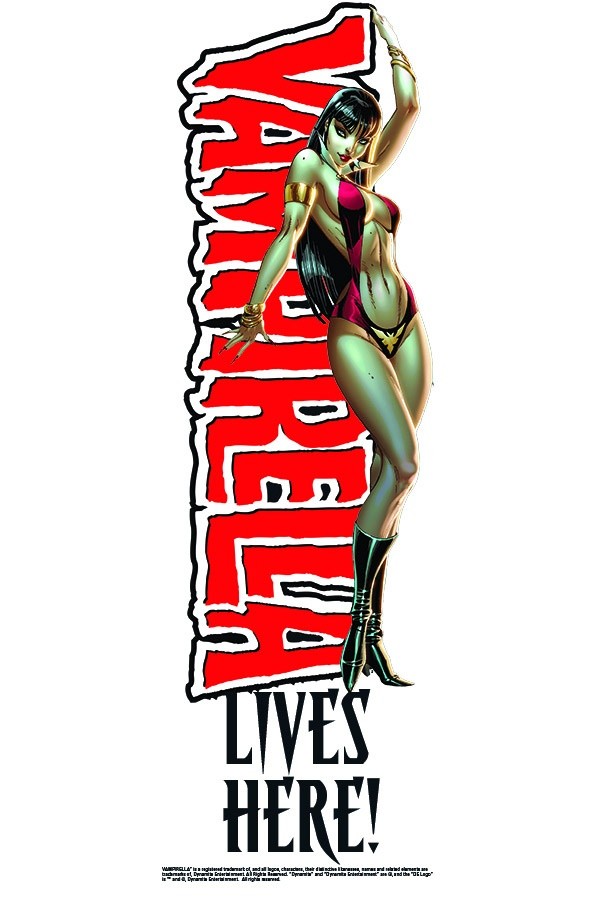 Priest continues to be humble about the success, sharing, “(Laughs) I’m happy to be part of the formula for the successful launch. Whatever magic contributed to Vampi’s 50th launch, most especially with our offbeat and quirky Kelvin Universe take on the character, is most certainly a team effort.”

“Despite the faith we had in Priest and Ergün, any time you plan out and execute a long overarching story—particularly in today’s market—there’s the worry you won’t get to see it through,” said series editor Matt Idelson. “Now that we’re nearing the midway point of this first epic, I’m feeling great about how the book is being received. And even though this is far from the first comics work by either of these guys, I feel like they—and the book—are getting better by the issue, which is really gratifying.”