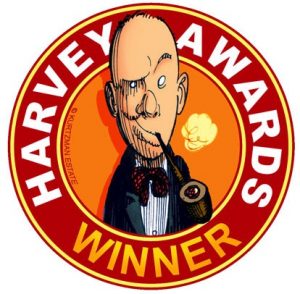 Winners of the 2018 Harvey Awards were announced October 5, 2018 during New York Comic Con at the Javits Center in New York City. Below is the list of the nominees in each category. The winners marked in bold:

Book of the Year

Digital Book of the Year

AUDUBON: ON THE WINGS OF THE WORLD by Fabien Grolleau and Jerémie Royer (Nobrow)
CALIFORNIA DREAMIN’: CASS ELLIOT BEFORE THE MAMAS & THE PAPAS by Pénélope Bagieu (First Second)
FLIGHT OF THE RAVEN by Jean-Pierre Gibrat (IDW)
THE GHOST OF GAUDI by El Torres and Jesús Alonso Iglesias (Magnetic Press)
THE LADIES IN WAITING by Santiago García and Javier Olivares (Fantagraphics)