This post should fit nicely into your Christmas stocking this year. Bobby (Boris) Pickett was an aspiring actor who sang with a band called the Cordials at night while going to auditions during the day. One night, while performing with his band, Pickett did a monologue in imitation of horror movie actor Boris Karloff while performing the Diamonds’ “Little Darlin'”. The audience loved it, and fellow band member Lenny Capizzi encouraged Pickett to do more with the Karloff imitation. 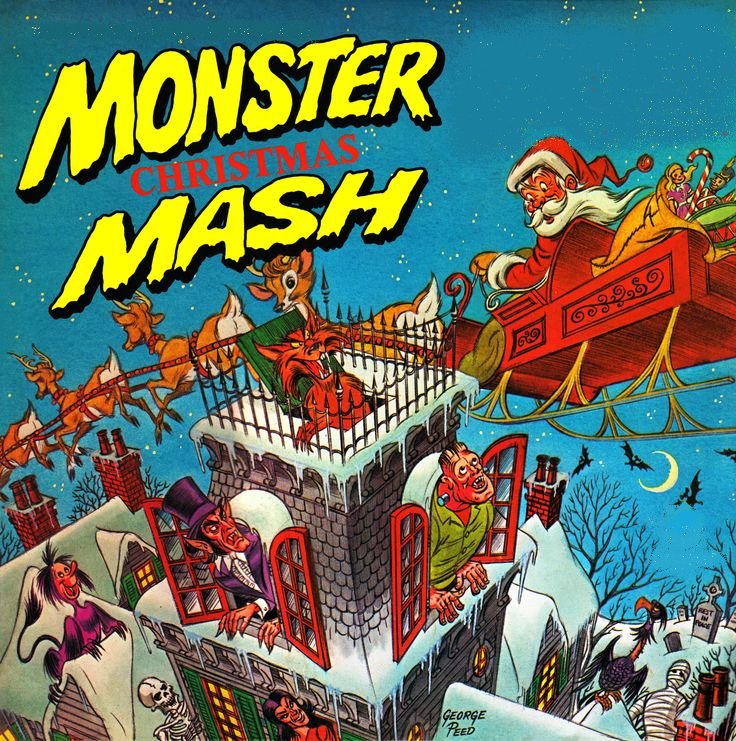 And from 1962, Pickett and Capizzi composed “Monster Mash” and recorded it with Gary S. Paxton, the legendary pianist Leon Russell, Johnny MacRae, Rickie Page, and Terry Berg, credited as “The Crypt-Kickers”. (Mel Taylor, drummer for the Ventures, is sometimes credited with playing on the record as well, while Russell, who arrived late for the session, appears on the single’s B-side, “Monster Mash Party”.) The song was partially inspired by Paxton’s earlier novelty hit “Alley Oop”, as well as by the Mashed Potato dance craze of the era. A variation on the Mashed Potato was danced to “Monster Mash”, in which the footwork was the same but Frankenstein-style monster gestures were made with the arms and hands.

That December, he also recorded the Monster’s Holiday.

Then, in 1974, along came the Monster Christmas Mash, no credit or relation to Paxton’s project, but possibly superior to his Monster’s Holiday hit.

Check out this fun Spotify Playlist for LOTS of songs like this from the Christmas Party Players!

Merry Christmas everyone and have a safe & Happy New Year.

Having Yourself a Crappy Little Xmas? Depressing Yuletide Songs
The Most Wonderful Time of the Year: Yuletide Comic Book Covers
Merry Christmas & Best Wishes for a Blessed 2023 from Bleeding Fool
No - Die Hard is NOT a Christmas Movie
'Tis the Season: A Few of My Favorite Modern Christmas Films
Christmas Countdown: The Top 7 Christmastime Action Films
Die Hard vs Lethal Weapon: Which is the Best Christmastime Action Flick?