Will the Fantastic Four Appear in Avengers: Infinity War?!

by Thom Pratt
|
Did Disney get the rights to the Fantastic Four back from Fox, and will they make an appearance in the Marvel Cinematic Universe during or after Avengers: Infinity War?

It’s possible, and a few of the post-credits scenes in Guardians of the Galaxy Vol. 2 might’ve tipped Marvel Studios’ hand.

Are the FANTASTIC FOUR in AVENGERS: INFINITY WAR?!

A Brief History of Disney vs. Fox:

Long ago in a decade far, far away (the early 1990s) Marvel was not owned by the Walt Disney Company and was on the verge of bankruptcy. To help pull themselves out of that tailspin, they sold off the movie rights to several of their most popular titles — Spider-Man, X-Men, Ghost Rider, Daredevil and, yes, The Fantastic Four.

Sony acquired the rights to Spider-Man, and they produced three movies with Sam Raimi as director. They then tried to reboot the films with the Amazing Spider-Man series and it, well, fell flat. Disney/Marvel were able to work out a deal to allow Spider-Man (now Tom Holland) to take his place in the Marvel Cinematic Universe beginning with Captain America: Civil War, and continuing in Spider-Man: Homecoming. (Homecoming? Get it? Because Spidey is “home” with Marvel now.)

After a few terrible movies, the rights to Ghost Rider and Daredevil returned to Marvel. Ghost Rider made an appearance in the MCU on Agents of SHIELD, and Daredevil, of course, got his own series on Netflix.

X-Men, of course, wound up at Fox and the Brian Singer film helped jumpstart the “superhero movie bubble” that still exists today. The X-Men films have been terribly successful for Fox for many years, including recent entries Logan and Deadpool. Marvel will have to pry the rights to the X-Men universe out of Fox’s cold dead hands.

The Fantastic Four were another story entirely. Also with Fox, two lackluster movies were produced in the late ’00s (which starred Chris Evans pre-Captain America as The Human Torch) and a recent reboot landed with a colossal thud.

Supposedly Disney/Marvel has tried on several occasions to get both the rights to X-Men and the Fantastic Four back so there could be one big happy Marvel Cinematic Universe.

Again, the X-Men are crazy successful and there’s a snowball’s chance. But did Fox finally relinquish the rights to the Fantastic Four, since they clearly have no idea how to successfully handle the franchise?

The Evidence…
“I’ll trade you David Haller for Reed Richards.”

You see, TV was always off the table. Marvel would need something mighty good to relinquish the TV rights to X-Men.

Like, maybe, the film rights to The Fantastic Four?

There are three as-of-yet unnamed Marvel Studios movies slated for 2020. Now, knowing how far out Disney announces its movies and that the dates are already set, it’s odd that these films have not been named yet.

Unless they’re hiding something.

Could the aftermath of Avengers: Infinity War include the introduction of the Fantastic Four, with them getting their own film in 2020? Could another film be of the Silver Surfer?

We’ve already seen Fantastic Four characters in ‘Guardians of the Galaxy Vol. 2’… and we shouldn’t have.

The mid-credits scenes in Guardians of the Galaxy Vol. 2 were pretty interesting for comics fans.

One scene involved showing us the cocoon of “Adam.” Adam, of course, is Adam Warlock — a gold-skinned intergalactic superhero who is instrumental in defeating Thanos in The Infinity Gauntlet storyline. That classic storyline, of course, is the basis for Avengers: Infinity War.

But here’s the thing. Adam Warlock was introduced in the pages of… The Fantastic Four! Issue #66 to be precise.

Meaning that film rights to that character could likely “belong” to Fox, just as other ancillary Fantastic Four characters like the Silver Surfer and Galactus do. Unless Marvel got them back.

Want more fuel for this rumormongering dumpster fire? OK, remember those big tall bald dudes Stan Lee was hanging with post-credits? Those guys were called The Watchers. And you know what? They were also introduced in the pages of The Fantastic Four. 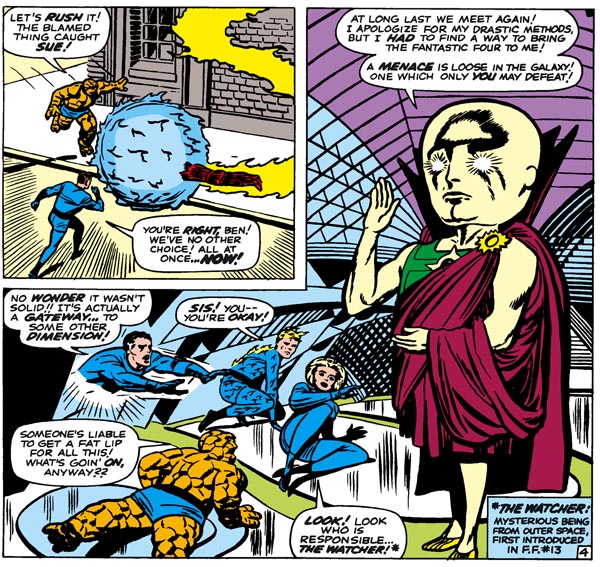 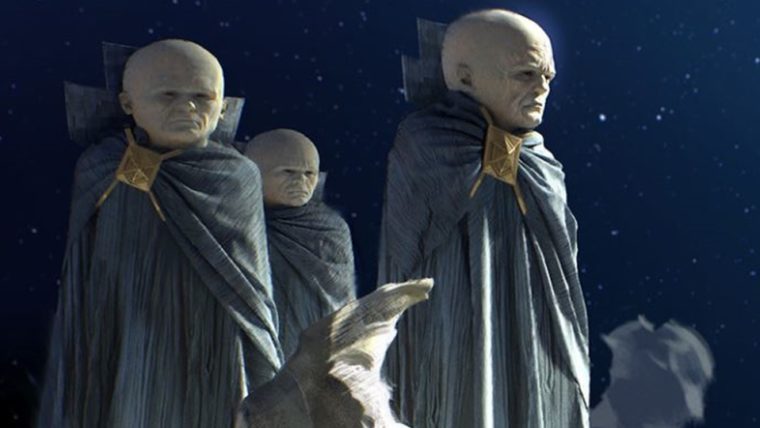 Now, it’s completely possible that both Marvel and Fox can use certain characters in a “gray area,” as they did with Quicksilver (a version of that character was in both Avengers: Age of Ultron and X-Men:Days of Future Past). But I’m not so sure Marvel would deliberately “go there” unless they knew they had a legal leg to stand on.