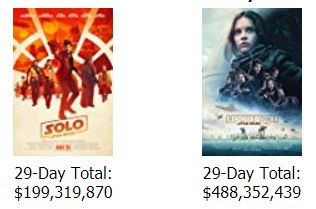 The numbers are in, and Disney’s Solo: A Star Wars Story has spectacularly let down Kathleen Kennedy and her media cheerleaders, particularly blue checkmark Twitter. The Disney shills’ excuse-making has been markedly anemic this time around. Everybody knew after The Last Jedi fell off a cliff that audiences were fed up with Kennedy’s mishandling of the franchise.

Nobody wanted a standalone Han Solo movie, so everybody knew it would flop. That’s why Solo apologists just look ridiculous. When they blame the movie’s failure on Star Wars fatigue, a white male lead, or Star Wars’ core audience not being Star Wars’ intended audience, it’s obvious even they don’t believe it. 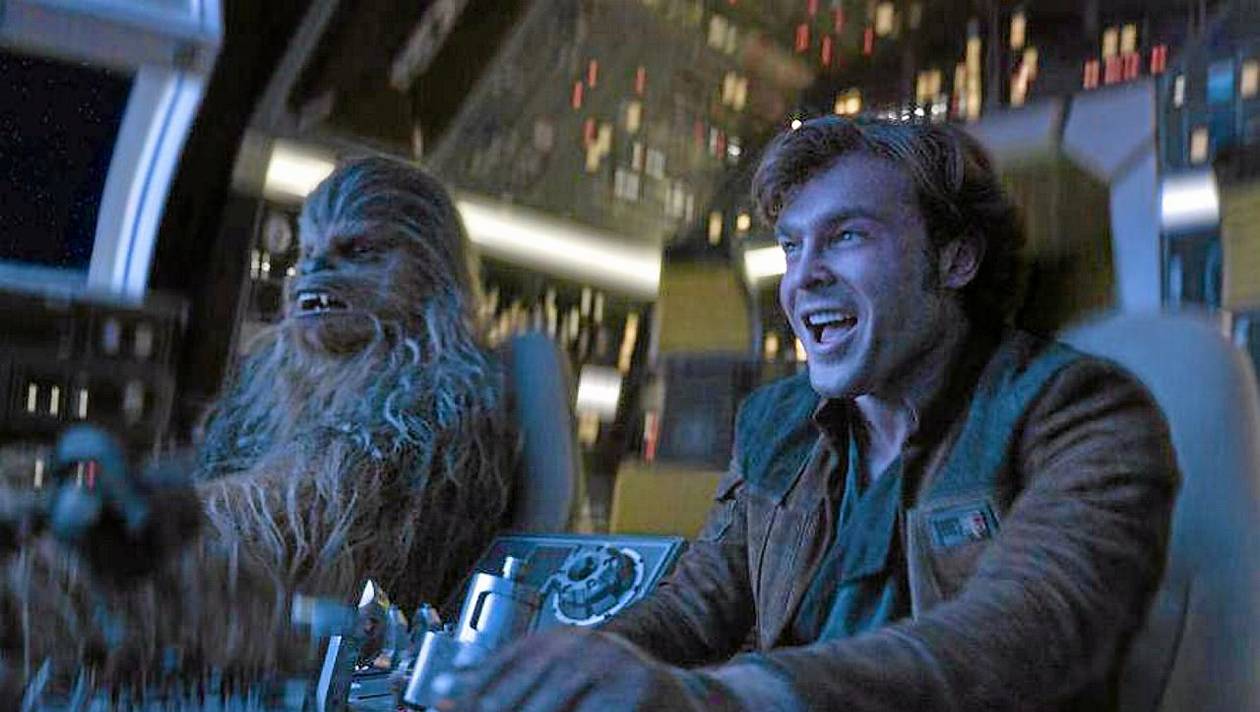 A fascinating emergent phenomenon surrounding the death of Star Wars is the new genre of film criticism/social commentary that’s sprung up in the last few years. The trend started with Red Letter Media’s cult hit review of The Phantom Menace, but the field didn’t experience much growth until The Force Awakens caused a minor backlash. The Rogue One writers’ anti-Trump safety pin campaign kept the scene going, but it didn’t kick into high gear until The Last Jedi convinced all but the most bluepilled paypigs that they’d been conned.

Guys like comic artist Ethan Van Sciver have made a cottage industry of puckishly eviscerating the new Star Wars films. The fact that it’s now considered hip to bash their four billion dollar franchise should set off alarms at Disney. In a sane world, any company whose intended flagship product had been reduced to perennial YouTube critic fodder would summarily fire the responsible parties and spare no expense repairing the damage to their brand.

But this is not a sane world, so Disney will most likely double down until Star Wars becomes a byword and a warning to other media companies that he who sins against the fans shall surely die. Anyone who still holds out hope for Episode IX, or the planned Obi-Wan or Boba Fett movies, has failed to understand the dynamics at play. 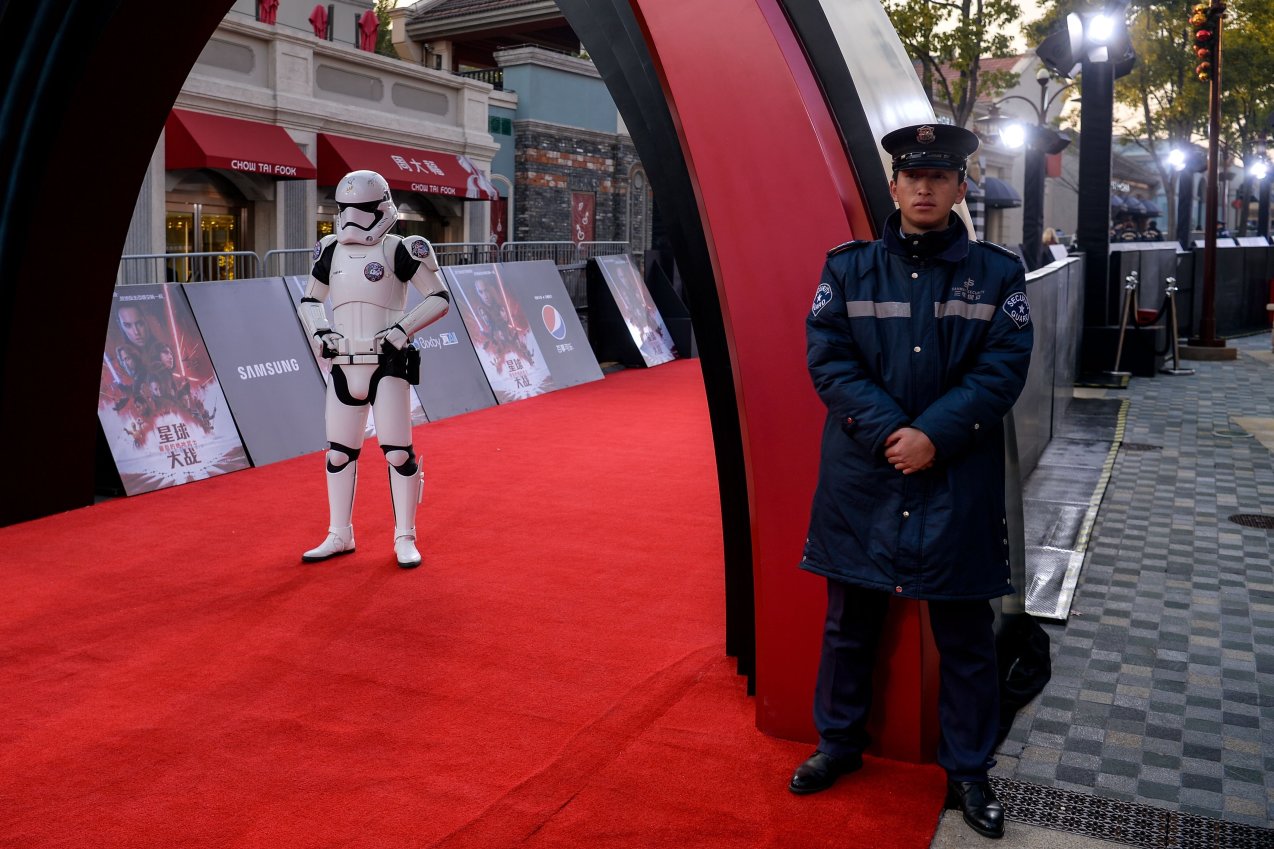 There’s no shortage of critics who’ll tell you why Mouse Wars is foundering in the West. An oft-cited but under-examined aspect of Star Wars’ decline is the franchise’s utter failure in China. Let’s look at the numbers. Here are the opening weekend figures for each of Disney’s Star Wars movies in the Chinese market: 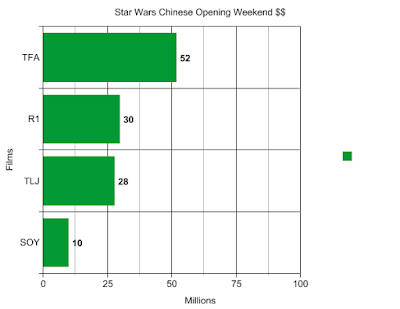 A picture speaks a thousand words. But why is Star Wars tanking even worse in China than in the West? A Chinese cinema buff buddy and I were discussing the matter, and we came up with a few possible reasons. 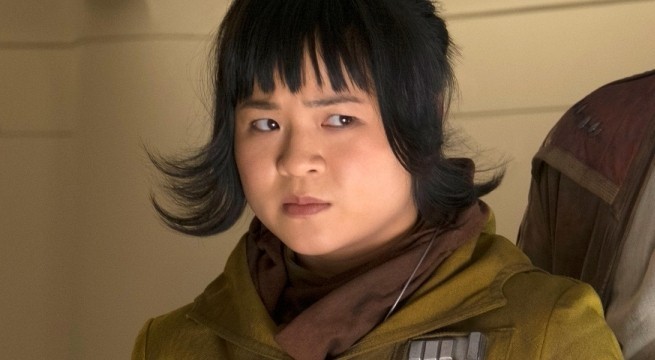 Prominently feature an Asian character in TLJ who looks bloated and frumpy and who always dresses like she just got off a double shift at the Sears tire center.

But that’s just scratching the surface. Tico’s appearance isn’t the only problem Chinese audiences have with Disney’s Star Wars. As in the pulps of old, romance is an indispensable fixture of Chinese storytelling. As my friend remarked, the Chinese don’t necessarily hate a criminal. They hate a criminal who’s a weird loner. Even the most intense martial artist or hardened gangster has a girlfriend (and sometimes also a mom) to humanize him.

No one in any Mouse Wars installment has anything resembling a traditional relationship with a member of the opposite sex. Finn is first rejected; then friendzoned, by Rey. The female lead of Rogue One, whose name I can’t be bothered to remember so I’ll call her Rey 2, has a series of broken relationships with a succession of father figures. Finn returns in TLJ to be continually browbeaten and whipped by Rose. Han showers with a space sasquatch, and Lando is banging a feminist robot. 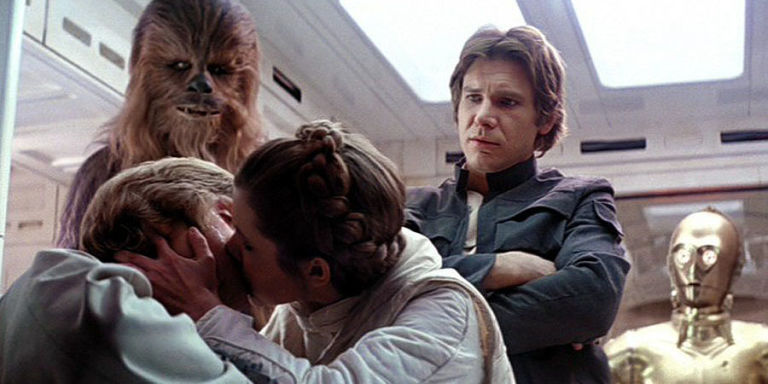 The root of China’s aversion to Disney’s Star Wars is story structure. To wit, the plots of TFA, R1, TLJ, and SOY are both too simple and too complex for Chinese tastes.

Almost all Western movies follow a plot structure known as the Hollywood Formula. It is a form of three act structure that dictates exactly what should happen at precise intervals throughout a film.

Three act structure is practically unknown in Chinese storytelling, be it cinema, television, or novels. Instead, Chinese writers tend to employ a two-stage model that consists of showing an event, followed by the characters examining the consequences of that event. Repeat until a desired stopping point is reached.

That kind of story structure might sound childishly simple, but anyone who’s seen a Chinese historical action film knows that you can pack a lot into both stages. Mouse Wars utilizes the Hollywood Formula in theory, but Kennedy and her purse puppy writers and directors stuff so much SJW agitprop into the proceedings that they make a hash of the protagonist-relationship character dynamic.