Whovian Fandom Vs. the Professional Doctor Who Critics

Let me start by saying that I think Jodie Whittaker is a fine actress, and she is more than adequate in her role as a female Doctor, but unfortunately, the series as a whole has so far been terrible, with excruciatingly bland writing, poor characterizations, and boring antagonists as far as the core audience is concerned.

Critics on the other hand continue to tell a different story altogether, with review and rating aggregate website Rotten Tomatoes giving the 11th season a massively “fresh” certification at 94% as of today. The actual viewing audience however? Abysmal. 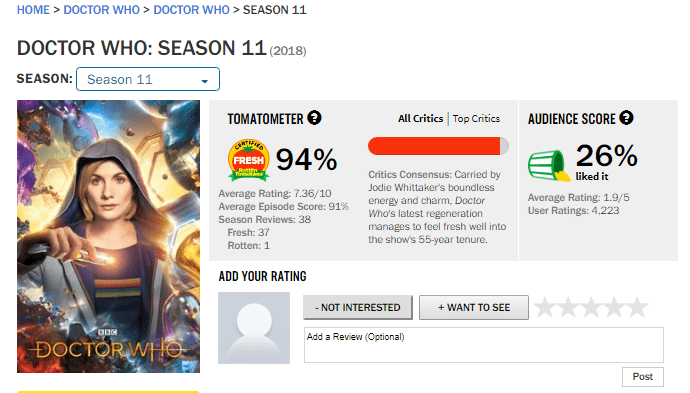 How can there be such a wide disparity between what critics are saying (94% Fresh) and what the audience is saying (26%)? While we keep hearing how Whittaker’s goofball performance as the Thirteenth Doctor merits all of the critical acclaim, there’s also been a lot of discussion that this series has been overdoing it on the social justice front.

Doctor Who 30% Rotten Tomatoes Audience Score | Whovians Are Not Pleased

Defenders of the show say that the poor Rotten Tomatoes audience ratings are being faked, but others who are willing to scratch beneath the surface seem to be noticing that it is actually the majority of those positive audience reviews that are from faceless accounts that look as though they haven’t reviewed anything prior to posting their swooning review of the Thirteenth Doctor.

The finale is slightly up over season 10’s finale, which clocked in at 5.29 in the seven day figures, but rounded out to a 5.6 in the 28 day average, according to BlogtorWho.

However, you have to keep in mind that season 10 started pretty low, opening at just a 6.68 in the seven day figures and a 7.24 after monitoring the stats over a 28 day period, where-as season 11 started at an 8.2 in the overnight ratings and eventually consolidated a 10.54 for the opener’s aggregate. So technically there was a much smaller drop-off between the opener and the finale for season 10 (with an approximate 20% drop) despite the season having an overall lower viewership rating, where-as there was a much larger drop-off between season 11’s opener and its finale (an approximate 35% drop), even though it had a much higher average opening viewership rating. So, fewer people tuned in for the season 11 finale compared to the season 10 finale relative to the season openers.

It’s been reported that in spite of these low numbers, and perpetually sinking audience reviews, everyone has been hired for another season. So if third wave feminism and social justice doesn’t destroy Doctor Who, maybe the new daleks will.

The Doctor and her friends will land again with an all-new season on @BBCAMERICA in early 2020. #DoctorWho pic.twitter.com/20fLDLigXK

Amazon Shuts-Down User Reviews for 'Rings of Power' Over "Trolls"
Power Failure: Showrunner Insists 'Rings of Power' Series 'Deeply Connected' to Tolkien
Sleight of Hand? Matt Smith Claims there's "Too Much" Sex in 'House of the Dragon'
It's Time to Take Back Our Culture & Entertainment from the Left
The Doctor is OUT? Co-Star Reveals BBC"s New 'Doctor Who' is Gay
No More Thor 4: Arab State Bans Marvel's 'Gayest Movie Ever'
Same Old Playbook: Is Rotten Tomatoes Trying to Shield Lightyear?