We Need to Talk About Star Wars

My personal experience with the Star Wars franchise starts when I was a child and watched (and re-watched, and re-watched) the original trilogy on video at home. I had a few toys, built some plastic models, and read almost every piece of the Expanded Universe through about 1998. My friends at school poked fun at me for having such an encyclopedic knowledge of the universe.

When the prequels came out, I loved them because they were Star Wars. I saw Episode I nine times in theaters, but at the same time my fervor for the franchise was waning as I replaced it with enthusiasm for The Lord of the Rings. After Episode III came out, Star Wars became almost a non-entity to me. I didn’t watch any of the movies for almost ten years.

When I did revisit them, I discovered the complete ineptitude of Episode I, the surprising decrease in quality with Episode II, and that I actually do really like Episode III, but needless to say, revisiting all six movies, while it did increase my affection for The Empire Strikes Back, did nothing to reinvigorate my youthful love for the property as a whole.

Which leads us to the Disney films.

When Disney first announced they had acquired the franchise and were planning new movies, I was actually pretty excited. That excitement extended from one movie, John Carter. In that box office bomb, which I love dearly, I saw Disney giving a property to a filmmaker who understood the material and did his best to take it to screen without any real interference from the studio itself. I thought that that trust in the artistic vision of the talent that the studio had hired would extend to Star Wars.

J.J. Abrams was, I feel, a good choice to get the franchise back on its feet. He’s got some talent, a lot of love for the franchise, and a good sense of fun (at times, Into Darkness isn’t very fun). When The Force Awakens came out, I was entertained. The effusive love that some people expressed towards the film at the time confused me a bit, but whatever. To each his own.

Rogue One was curious to me. I felt like the movie ended up working as a whole despite some glaring flaws (seriously…it’s emotionally dead even when it seems to be trying really really hard to be emotionally alive). The surface of the film is so well done with my favorite bad guy in the entire franchise (Director Krennic) that I end up enjoying the film despite itself. And just for clarification, Krennic is my favorite because he’s so different from all the others. He isn’t looking for conquest or domination. He’s purely a bureaucrat who wants credit for the work he’s done on the Death Star. In some ways that’s more mundane, but also a bit scarier. He feels real in ways that I don’t feel with Darth Vader. 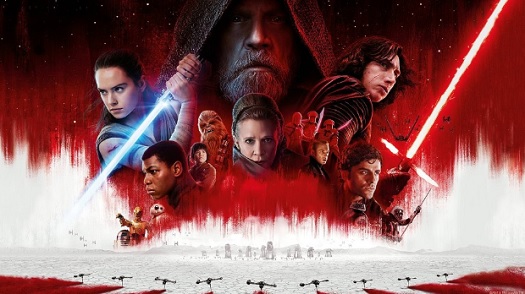 And here we see the split in overall opinion really grow.

I’ve considered writing something about The Last Jedi since I saw it and didn’t hate it like, apparently, everyone else here, but it was only with the release of Solo that I felt an actual desire to do it.

When I first saw The Last Jedi, I thought that my appreciation of the film would grow with time, but, at the moment, I loved everything to do with Luke Skywalker and the idea around the slow chase through space. It’s also, in my opinion, the best looking Star Wars film with wonderful color palates, especially around the final planet. I also thought that the director, Rian Johnson, was doing something interesting with what seemed like a rejection of the franchise on the surface, but what I saw as actually a new embrace of it.

All of that I felt, along with complete boredom regarding the casino planet and total flabbergasting guffaws at the particulars of the slow chase through space. I joked with some friends at the time that it felt like Johnson had written his script, completely forgotten to include Finn, and then threw in a subplot on top just to include him.

After a second viewing months later, what I loved remained what I loved, but what I hated grew in my mind. Rose really is one of the worst characters written in a franchise that includes Jar Jar Binks, and Vice Admiral Holdo is a moron of a leader. That’s hard to ignore when it takes up about 40% of the movie. I can understand having those same concerns and disagreeing with the choices made for Luke and hating the film. However, I think that the fact that I really do see Luke’s journey in the film to be interesting and involving is pretty obviously the difference between me and most of you fine people.

First, Kathleen Kennedy, the head of Star Wars at Disney, greenlights a Han Solo movie. She publicly and enthusiastically hires a pair of directors known for improvisational comedy to make this movie. 75% of the way through filming, Kennedy decides that she’s made a poor choice, very publicly fires the pair, and replaces them with Ron Howard. Don’t get me wrong, the man who made Apollo 13 and Rush is fine in my book, but he also made The Da Vinci Code and its sequels. Anyway, apparently, Howard reshot almost everything, extending the shoot by months and reportedly doubling the budget from $125 million to $250 million. The studio then releases the film to hefty fanfare (actually, marketing), and it bombs at the box office.

Does the woman, who is responsible for literally every single decision in that chain of events, keep her job? It’s a mystery.

Now, as to the movie itself, I was bored. I realized about thirty minutes into it that I had just watched some exchange between Solo and someone else that was supposed to be funny and it hadn’t even begun to tickle my funny bone. On top of that, what really bugged me about the movie that it’s a movie about heists that doesn’t actually have any. There are four “heists” that are literally just action scenes like anything else produced today.

I started comparing the film to Ocean’s 11, not because Ocean’s 11 is any sort of masterpiece, but because it’s widely seen as a prototypical modern heist movie. The main character gathers a team, develops a plan, executes the plan under the noses of the target, and ends up sneaking away without a shot fired. It’s a game of tension, not explosions and yelling, but the former is all that Solo offered.

And, on top of that, Solo ends up giving what is supposedly the initial funding to the rebellion. We couldn’t have just a Solo adventure about him in his youth, it had to connect to the larger story in someway, and Solo had to be the outright hero in that regard. That’s when I saw Kathleen Kennedy’s fingerprints.

The Hillary Clinton of Hollywood 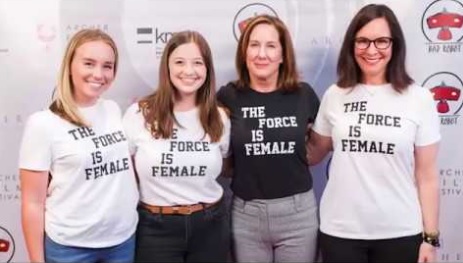 Kathleen Kennedy worked with Steven Spielberg for years as he made some of the most beloved movies of the 80s, 90s, and 00s. In this time, Kathleen Kennedy was responsible for roughly none of the creative content of those films. She stood there while Spielberg worked. In much the same way, Hillary Clinton stood near Bill Clinton while he was really good at politics which in no way transferred that ability over to her. However, both Clinton and Kennedy were convinced that their proximity to talented people made them talented.

I really wish Kennedy would steal $10 million of Disney’s money to write and direct her own movie. Get that creative energy pumping into something new and original, and leave Star Wars alone. Then, when her little project comes out and gets trashed as the self-indulgent exercise in grievance politics that it would surely be, maybe she’ll stop trying to actually direct the creative ship of Star Wars.

You see, that bit about Solo funding the rebellion at the end of his movie? That felt like a note from Kennedy.

“Ron, I know that this is supposed to be a stand alone adventure, but we have to think that Solo is an incredibly moral man at the end of the movie, so have him give all of the incredibly valuable materials to rebels. Oh, and I fired your predecessors, so you’d better do what I say.”

I took that theory and I retroactively applied it to The Last Jedi, and her fingerprints became obvious yet again. The Luke Skywalker stuff feels all Rian Johnson, but Vice Admiral Holdo feels contaminated (like she might have been in the original script in a different way) and Rose feels like a Kennedy creation in her entirety. On top of that, because the whole denouement of the casino planet feels so out of place, I estimate that the whole subplot was her idea as well.

Now, if you hated what Rian Johnson did with Luke Skywalker, this theory probably won’t do much for you, but it seems to explain to me what’s wrong at the heart of the newest iterations of Star Wars. Kennedy is afraid of doing new things. The Force Awakens had a remake of the original film in its last act. All of the Anthology films have been adjacent to the original trilogy. There’s no desire to really break out from the large event film idea that is Star Wars. And, in addition to that, she must have creative input even if her ideas are terrible. She has the power to hire and fire whomever she wants working on those films, so no one is going to tell her no. They saw what happened to Miller and Lord on Solo. She’s a less talented George Lucas surrounded by even less imposing Rick McCallums.

Read the whole thing at the Ace of Spades blog here (but be warned, if you comment on any older posts on their message boards, your account may get blocked. It’s a glitch they haven’t overcome.)

And be sure to check out David’s personal blog here.