Watch: Reno 911! Returns to Roku as the ‘Defunded’ Trailer Arrives 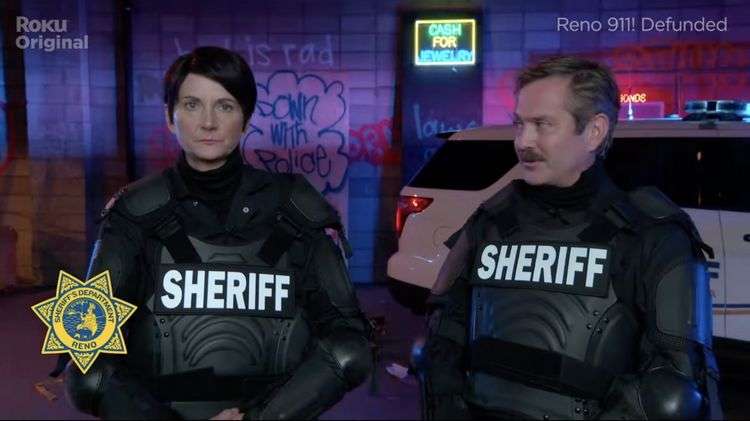 You can’t hold a good officer down, and the long-running Reno 911! is back! It turns out you can’t keep a bad officer down, either, for another new season on Roku Channel! The Reno 911, to be precise! The return of the Reno Sheriffs’ Department was announced in a defunded trailer released on Wednesday, February 9, 2022. This time, however, they have been defunded! Reno, dial 911! Defunded will be resurrected as a Roku Original, with an eleven-episode season set to premiere on February 25, 2022.

Absent will be Joe Lo Truglio who will not be reprising the role of Deputy Frank Rizzo. (UPDATED BELOW)

It’s 2022. Crime is on the rise, but one city is never short on heroes. Reno’s finest are back and this time they’re facing their biggest challenge yet –they’ve been defunded! No budget. No back-up. No problem.

Reno 911! originally aired on Comedy Central, premiering in 2003 and runningsix seasons. In 2007, the deputies appeared on the big-screen in Reno 911! Miami, which saw the Reno Sheriffs’ Department headed to Florida. In 2020, the series was revived on the streaming platform Quibi for a season of twenty-five seven-minute episodes. All of those are available to watch for free on Roku. In December 2021, the Reno Sheriffs’ deputies second movie: Reno 911! The Hunt for QAnon was released on Paramount+. The upcoming Defunded Roku series will consist of traditional 30-minute-long episodes.

UPDATE: We’ve been informed that Joe Lo Truglio IS going to appear in this season. One eagle-eyed viewer noticed that he’s even in the trailer. This is good news, even if it makes us look stupid )