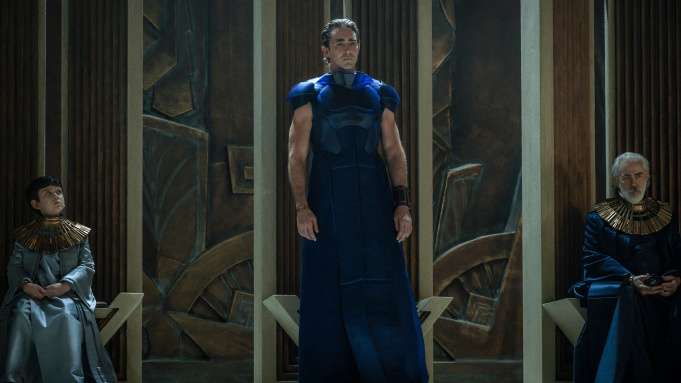 Apple TV Plus has released a trailer for its upcoming adaptation of Isaac Asimov’s Foundation.

Asimov’s stories were first published in the 1940s as short stories and later (in the 1950s) turned into a trilogy. But in 1981 he returned to the world, adding both sequels and prequels. Now, the saga gets a new life as dramatic television, the first season of which premieres on Sept. 24 with its first two (of 10) episodes and then drops a new episode weekly on Fridays up to and including Nov. 19.

The story follows a band of exiles who learn that the only way to save the Galactic Empire from destruction is to defy it. How they know this is because Dr. Hari Seldon (Jared Harris) predicts the fall of the Empire and he and his followers establish the titular Foundation to attempt to provide civilization a future.

The currently ruling Cleons (including Brother Day, played by Lee Pace; Brother Dusk, played by Terrance Mann; and Brother Dawn, played by Cassian Bilton) are enraged by what Dr. Seldon claims he knows will happen, concerned their reign will be weakened and therefore are forced to reckon with losing their powerful legacy. But while they may be able to murder the man, the trailer points out, that may not kill the movement.