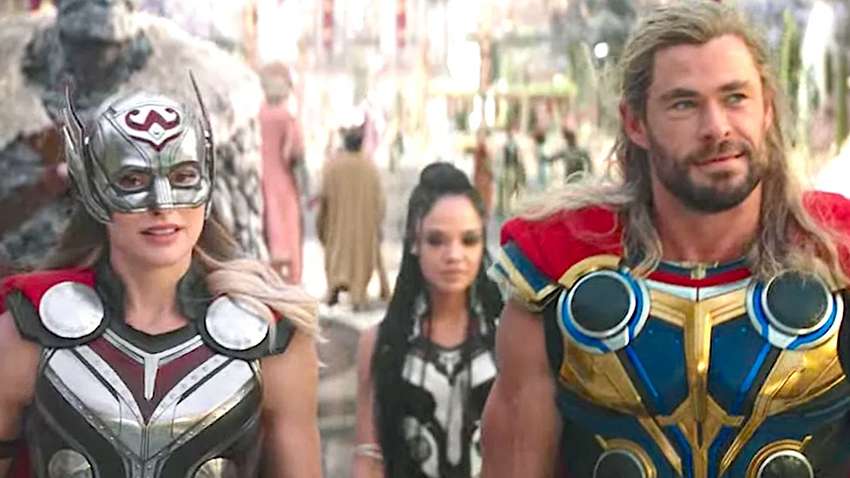 Thor: Love and Thunder isn’t doing as well as expected in reviews, but its box office numbers clearly aren’t suffering because of it. Deadline reports the film is currently scoring a B+ from CinemaScore, the same as the previous MCU film, Doctor Strange in the Multiverse of Madness and the films Comscore/ Screen Engine PostTrak is sitting at 3 ½ stars and a 77% positive rating, which puts is just above Eternals 75% rating.

We reported Friday, the movie currently sits around 68% fresh on Rotten Tomatoes, making it their 3rd ranked Thor movie in the MCU, barely beating out the worst of the bunch, Thor: Dark World (66%) and placing it in 26 out of 29th place in theatrically released Marvel Cinematic Universe movies.

It no longer matters whether MCU movies are good or not … https://t.co/vwinOZusgl

The box office numbers are much better with an opening Friday of $69.5 million which includes $29 million preview night and it’s estimated to make between $135 and $145 million over the entire weekend. Overall, the total box office for the weekend looks to be about $244 million which is up 33% over this same post-Independence Day weekend in 2019, which is a continuing good sign for theaters even with reports of COVID numbers picking up again.

With this release, Marvel Studios keeps its streak alive with another film opening at the top of the box office as Thor: Love and Thunder hits $143 million domestically and $302 million worldwide. This has MCU’s first solo character’s “fourth film” coming in just behind Guardians of the Galaxy Vol 2’s $146.5 million opening weekend and making it the 12th best opening in the motion picture studios history.

The interesting thing here will be to see what kind of legs Thor will have with the B+ CinemaScore. Movies like Spider-Man: No Way Home and Shang-Chi and the Legend of the Ten Rings had A scores and tripled their opening weekend during their domestic run, but Eternals and Doctor Strange in the Multiverse of Madness had B scores and just doubled their debut take. This is the only other superhero film set to release in 2022 until Black Adam in October or Black Panther: Wakanda Forever in November.