While Solo was bombing again during its second weekend, Star Wars: Aftermath author Chuck Wendig took to Twitter to lash out against the #Comicsgate scandal and even comic book artist Ethan Van Sciver. One Angry Gamer and Bounding Into Comics have both covered this story.

Ethan responded with another one of his hysterical videos:

STAR WARS NOVELIST DENIES REALITY AND ATTACKS FANDOM!! Y U MAD??
As a result, Chuck spent the rest of the day lashing out at the “tiny vocal minority” of #TheFandomMenace, by frantically typing out a barely coherent progressive manifesto on Twitter, in 25 to 140 character stanzas.

Ugh, one of those Comics-Gate turd-farmers did some video about me and now I must flex my block hand. Ethan Van Someone? JFC.

oh my god these people

What a weird thing to be a fan of a thing you so obviously despise.

We don’t despise Star Wars.  Rather, we despise what ignorant SJWs such as yourself are doing to it.

Current idea is that SOLO is “tanking” — I guess by having the fourth biggest opening in 2018 so far — because of SUPERFANS who so hated the Last Jedi so bad that their magic hate powers caused a sorcerous boycott of SOLO.

Apparently you didn’t pay attention to any of the news over opening weekend of Solo?  How about the 2nd weekend?

And that’s astonishingly goofy on so many levels.

First, that fans — again, FANS! — are happy — HAPPY!? — that Star Wars is faring poorly. It’s like rooting for your own child to fail. It’s like hoping your own puppy falls down some steps. It’s so weird.

We’re rooting that your version of Star Wars is faring poorly.

Second, that people hated THE LAST JEDI enough to affect SOLO’s numbers, but somehow not enough to affect… TLJ’s numbers? Like, with TLJ, what, people kept tonguing that broken tooth? Feeding money into the Movie Machine to hope it would get better? And then bought the Blu-Ray?

Actually, The Last Jedi‘s numbers WERE affected, the 68% dropoff after the opening weekend was shocking, and portended this happening for those who didn’t stick their heads in the sand.

“I hate this ice cream and I want it to fail, so I will keep buying it and eating it.” pic.twitter.com/ETiMHnFZR2

Huh?  TLJ and especially Solo both demonstrated that fewer and fewer people are returning to buy your ice cream.  Maybe that’s what your mad at?

And if you fall deep enough down the rabbit hole, it gets extra weird.

First, they hated TFA, because something something SJWs, JJA, identity politics, ANH rehash, whatever.

Then, they hated TLJ because it “ruined TFA.”

Well Chuck, you seem to live in a collective, where everyone is required to think identically.  Diversity of thought is strictly forbidden for you, but normal people (normies) are individuals, and therefore think individually.  Some people liked TFA, but not TLJ and some people didn’t like either, but each individual has their own reasons for being dissatisfied with the current direction of Lucasfilm. No two movie goers will be exactly alike.

Then they were sure that TLJ failed because it didn’t do TFA’s numbers, even though TLJ was still like, one of the biggest movies ever — not that this really matters, but somehow they’re sure this means it failed? Blah blah Ruin Johnson and other clever starwarsgate trolltalk.

Again, TLJ‘s numbers were affected, the dropoff after the opening weekend was shocking.

SOLO arguably *is* underperforming, and to claim that their little fan campaigns had anything to do with that is so bizarre and narcissistic, you might as well claim it’s because you did a fucking magic “I Hate Star Wars” tap dance in your man-cave.

In some respects I agree.  In keeping with your ice cream metaphor, the social justice propaganda did all the heavy lifting in pushing normal people away from the franchise, just as it does in every other cultural institution that it infects.  That was the bulk of the sundae, and it will likely continue to grow.  The boycott was likely just the cherry on top of that sundae.

The reasons a movie underperforms are multifarious: it’s not that good, or we just had a SW movie, or SW is settling into a more predictable soft pattern as Marvel has, or people don’t want a new Han Solo, or it just isn’t tickling the zeitgeist in a meaningful way.

Yes.  It is multifarious.   The poor treatment of critical fans by Lucasfilm representatives, the imposition of moronic social justice propaganda and the subsequent SJW fatigue, the massive box office drop off after opening day of The Last Jedi which portended of bad things to come, the waning toy and merchandise sales which indicated waning interest, letters written by the fans and sent to Lucasfilm and Hasbro, the in-your-face announcement of Lando Calrissian’s pansexuality and the celebration of a social justice droid shortly before release, the refusal to cast fan favorite Anthony Ingruber as Han Solo, Lucasfilm staff marginalizing the same criticisms coming from women and people of color, and of course, the boycott.

It’s *never* because of hater-fans. A movie also never *succeeds* because of its fans, because most moviegoers — the ones who form the bulk of the moviegoing public, the ones who buy most of the tickets — don’t give a great honking shit about most of this stuff.

Right.  They just get pushed away by your social justice propaganda.  Naturally.

It’s just fascinating to watch this group claim some kind of power and agency over this. And they WANT that agency so, so, so bad.

Their next “move” in their culture war campaign is, wait for it, to “support Jurassic World 2” because of Colin Trevorrow.

Thank you for the plug, Chuck.

Trevorrow was fired from #EpisodeIX, so their thing is, PUT ALL OUR ENERGY INTO JW2 AND MAKE IT A SUCCESS and THAT’LL SHOW STAR WARS, THE THING WE SUPPOSEDLY LOVE BUT ACTUALLY REALLY HATE.

I mean, you might as well “support” oxygen. “Everybody’s breathing it. We won!”

JURASSIC WORLD 2 ain’t gonna have any problems at the box office. If you really want to “prove” your power, see if you can get The Book of Henry to the top of the Blu-Ray charts or some shit. pic.twitter.com/e9IrkiaAXP

It’s not about making Jurassic World 2 a success.  It’s about supporting the director and producer who has respect for the fans.  Lucasfilm staff could learn a lot from him.

But the fact that you’re raging on about the #SeeJurassicWorld2 campaign is an excellent indication that it’s the right thing to do strategically.  Thank you for your confirmation.

Hey, remember the days when you guys thought that everyone would go see the movies and buy the toys and merchandise, because Star Wars?  Good times, right?

Thing is, I still remember this from AFTERMATH — all the review-bombing, all the conspiracy theories about how the book was Secretly Failing. I’d get emails telling me, “Ha ha ha, your book isn’t even on bookshelves!”

Never mind there are a lot of reasons books don’t land on bookshelves — one of them being, well, the book sold out.

Just like there’s lots of reasons that Star Wars is faring poorly?

And of course you wonder how this even continues or why, and those answers are both complex and simple. First, some people have monetized it, or want to — YouTube channels that financially channel people’s dipshit rage.

Well I’m glad Ethan Van Sciver channeled your rage, and was able to get value from your worthless ravings.

Second, bots or fake accounts. Given that some of these accounts are literally nothing but this — or are this and Trumpy shitstain stuff — you kinda see what’s up.

Third, it’s what’s at the heard of ALL this weaponized aerosolized horseshit — it’s sexism and racism. It’s sphincter-stung white dudes who are so tender, so brittle, they cannot hack that the world is now only 90% about them instead of 95%.

Their names change — MRA, incel, gamer-gate, comics-gate, sad puppies, Real Star Wars fans — but at the heart of it is the same fragile rage born of the poisonous chemical combination of white supremacy and toxic masculinity.

Don’t the Reptillians and the Illuminati play any role in this?  What about the Men in Black?  The Pleiadians?

What about the non-whites and non-women who have the exact same opinions?

This is the huge, huge cultural knot that lead to this current fuuuuuucked-up moment in American and world history, and it’s going to take time and effort to untie it and/or chop through it.

Chop through it with what?  How?

It’s the same shit. It’s the same tiny hearts nested in massive inflated egos who fear that the world is not uniquely theirs and that they might actually have to, gasp, share it with other people, and oh no, not get by on mediocrity alone.

The reason they hate identity politics is that it involves politics that do not perfectly invoke their singular identity. At the heart of it, these people aren’t fans, and they can’t see through the particulate shit-fog of their own expulsions to see what they really are.

Identity politics is strictly for the small minded and immature.  It’s merely a large scale version of high school politics where the silly artificial divisions of geeks, jocks, and burn-outs mean so much.  It’s juvenile.  Grow up.

Then Chuck decided to provoke fans again the very next day.

hey so this thread summoned some real ding-dongs https://t.co/SZrMDUhZuL

It’s always only a matter of time before the bullies play victim. Chuck may still be going on and on, I just can’t keep up with it all.

There’s much, much more. Read the whole thing at Itchy’s blog here here.

Hey Chuck Wendig and Rian Johnson, I’m not a “white overweight manbaby basement dweller” and I hated The Last Jedi. How can that be possible? Where is Ja Rule so we can make sense of this? @rianjohnson

Only a few days after this story, Chuck went off… again, because Rose Tico actress, Kelly Marie Tran, reportedly deleted a bunch of her Instagram posts because she was getting some mean comments. As of this writing, there has been no confirmation that the actress left Instagram. It could have been boredom, frustration, bullying, or may have even been because of her newest NDA with Lucasfilm now that the third installment of the new trilogy has begun filming. But… “muh narrative!!” 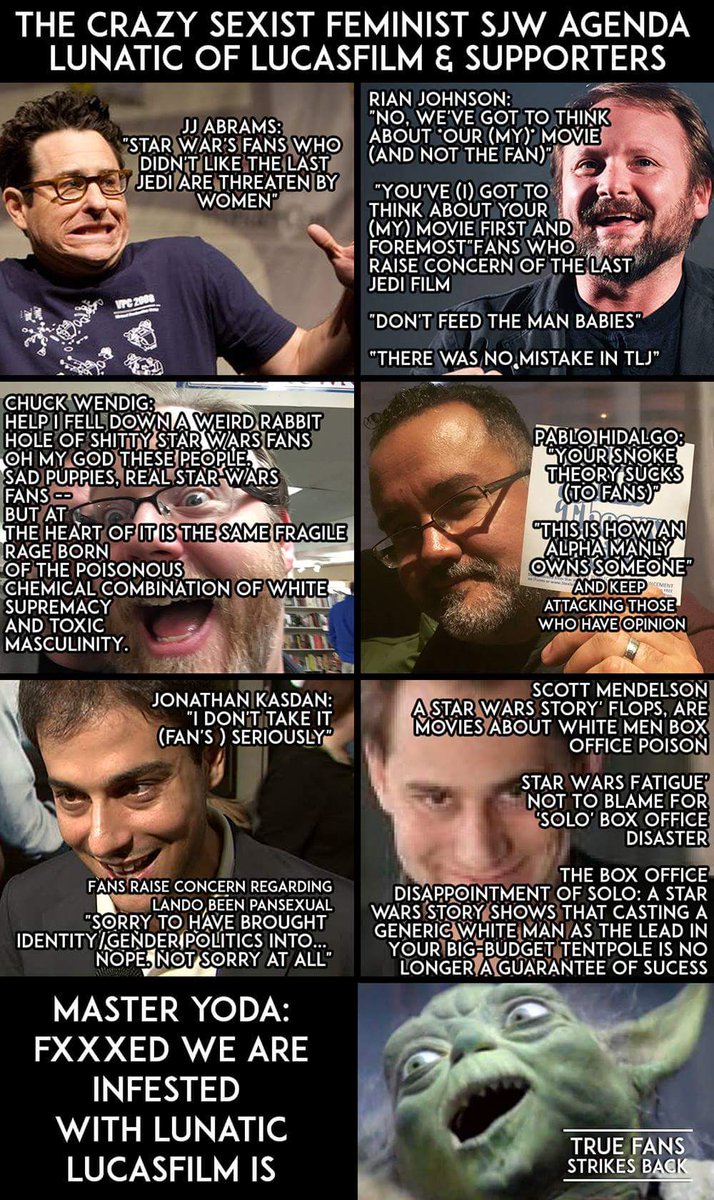