Doctor Strange in the Multiverse of Madness has pulled out all the stops in order to deliver a Marvel film unlike any other, with director Sam Raimi promising cameos from every corner of Marvel’s films and TV shows. In a recent interview with Rolling Stone, Raimi explained how addressing a film that includes non-MCU characters requires a unique strategy, because while certain members of the audience may be familiar with these characters, it’s unlikely that Stephen Strange and the rest of the audience have.

Fans have been surprised by teases for Patrick Stewart as Professor X, the Illuminati, multiple forms of Strange, Wanda Maximoff, and more as the trailers began to roll out. In the Rolling Stone report, Raimi was asked about using those legacy characters outside the MCU:

“I think if that situation appears, sometimes the best answer is to just let the character who’s experiencing this new character react truthfully. Now, if there was a famous character from another universe that appeared in Multiverse of Madness, I’m not sure that our Doctor Strange would even know who he was; he might blow him off and not make it any big deal at all. I think a truthful response can sometimes be the funniest or the most engaging for an audience. You put them in a position like, ‘Man, you don’t know who that guy is? Oh, my God!’ It’s like if some schmo was meeting James Bond onscreen for the first time, and said, ‘Buddy, you’ll have the martini the way I serve it. Get me?’ ‘Don’t you know that’s James Bond?!’ That’s a different kind of fun for the audience to have.”

Here’s the final trailer before it opens wide today.

Everything has led to this moment. 🌀💥🤯

Tomorrow, be the first to experience Marvel Studios’ #DoctorStrange in the Multiverse of Madness only in theaters! Get Tickets Now: https://t.co/VoGdr7T8HN pic.twitter.com/aZjaUAttOT

Reviews have been mostly positive so far. Please be warned that mild plot spoilers await below.

“Fortunately, the movie’s last act is its best. Though never as darkly weird as its Lovecrafty title promised, Madness starts to play more to Raimi’s strengths — it’s looser, more kinetic and occasionally goofy despite the big stakes — and to offer some visions that may stick in viewers’ heads even after they’ve started devouring trailers for stories set in Wakanda, Asgard and the Quantum Realm.” – Jonh Defore, The Hollywood Reporter

“It’s a movie set in several universes at once, and it keeps shooting off into ever more insane dimensions of alternate reality. Its story doesn’t develop so much as it multiplies. In theory, this should multiply the fun, though that’s not necessarily the way it works out. “Doctor Strange and the Multiverse of Madness” is a ride, a head trip, a CGI horror jam, a what-is-reality Marvel brainteaser and, at moments, a bit of an ordeal. It’s a somewhat engaging mess, but a mess all the same.” – Owen Gleiberman, Variety

“The Multiverse Of Madness is noisy, frantic and at times a little messy, but it’s never less than entertaining. The MCU faithful will cheer its numerous call-backs; Raimi-heads will groove on its Raiminess; and we suspect even those bewildered, unprimed viewers will at least appreciate the way it 100 per cent lives up to its title.” – Dan Jolin, Empire Magazine

“Multiverse of Madness excels when Raimi’s voice is the loudest one in the room. Multiple sequences nostalgically harken back to the stylistic influences in his pre-MCU Spider-Man days while others dip deeply (sometimes even shockingly) into true horror. This actually may be the least kid-friendly Marvel has ever allowed one of their movies to get while still remaining safely in the PG-13 rating zone. There is blood, some light gore, and multiple graphic death scenes that all feel deeply subversive and interesting.” – Mason Downey, GameSpot

“Multiverse of Madness has a concept strong enough to overcome a few missteps. Not to mention an excellent cast that commits to this very weird slice of the MCU. If Doctor Strange 1’s brand of weirdness was a homerun then Doctor Strange 2 will push things even further. It’s a film that only Sam Raimi could have made and one that isn’t shy about letting his genre sensibilities permeate every shot. In a world where MCU films have a lot of homogeneity, there’s no denying Doctor Strange in the Multiverse of Madness is a wild ride.” – Anthony Taormina, Game Rant

“While the Marvel-ness of Madness will make your head spin, Raimi’s signature style, penchant for the macabre and sense of humor oddly ground the film. Scenes that feel akin to his Tobey Maguire Spider-films of the early 2000s — and the zombies, demons, monsters and schlocky weirdness reminiscent of Evil Dead and Drag Me to Hell — almost seem nostalgic.” – Brian Truitt, USA Today

“While the MCU’s interconnected nature was once one of this universe’s strengths, now, it almost suffocates what Raimi is trying to do here. As a film that highlights Raimi’s talents as both a director of distinct superhero stories, and idiosyncratic horror tales, Doctor Strange works. Yet as a larger piece in the ever-expanding Marvel Cinematic Universe, the Multiverse of Madness starts to show the cracks in trying to continually attempt to build and one-up what came before.” – Ross Bonaime, Collider 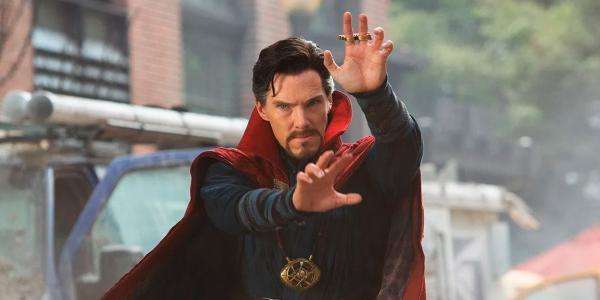 According to Variety, the second standalone superhero adventure to spotlight Benedict Cumberbatch — is projected to collect a mighty $160 million to $180 million when it opens in 4,400 North American theaters over the weekend. Some box office experts believe that excitement for all things Marvel could propel the film’s three-day tally closer to $200 million. That’s a benchmark only a handful of films have reached in a single weekend.

Already, “Doctor Strange” has racked up $65 million in domestic pre-sales, which is significant because that is more money than many pandemic-era releases have grossed in their entire theatrical runs. Advance ticket sales for Marvel and other major franchise films tend to be front-loaded because fans want to be among the first to see the movie — lest spoilers appear online and ruin the fun.

Are you planning to catch it in theaters or wait for home video or will you be skipping this one?