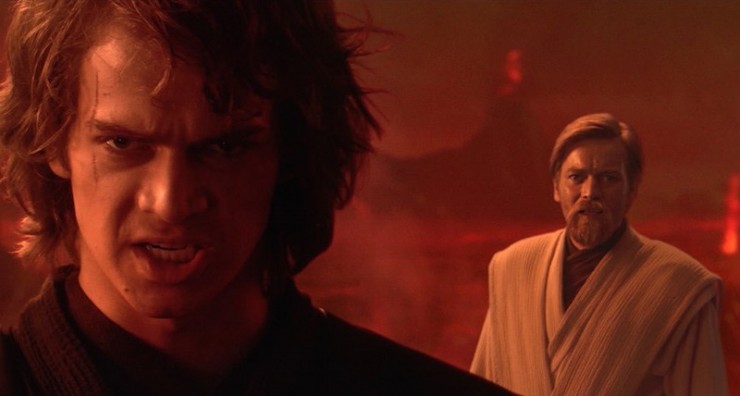 Star Wars was already a huge part of my life when the prequels came out. I was a massive fan of the originals, I had the toys, and I saw all the re-released and updated movies in the theater multiple times. I remember bracing myself for the action and being on the edge of my seat opening weekend. My entire family went to AMC Painter’s Crossing to see The Phantom Menace. The lights went down. The music went up. And I learned a whole lot about an international council. I guess as a kid I didn’t hate Jar-Jar.

But the action was gone. And I’m not sure the heart was there either. Anyway, two movies later, and things felt dire. Now that we’re back in a great era for Star Wars, I don’t want to go back…but I think we have to, especially after I saw this ludicrous deleted scene that blew my mind.

Today we’re going to talk about that, unpack the entire 19 seconds of W-T-F storytelling, and talk some Star Wars prequel nonsense.

I was scrolling through Twitter and found this. I cannot believe it’s real. But it is. So watch the Star Wars deleted scene and then let’s chat.

just found out about this deleted scene from revenge of the sith and I am losing my goddamn mind pic.twitter.com/w6QJCvvHmq

What the hell was that?

Let’s take it in stages.

It’s under 30 seconds, which is awesome, because my psyche can’t handle much more. So in this scene, we learn that Obi can’t really speak droid? But you can guess this is where he learns the lessons he should, which matters later because he can talk to R2D2. That’s a fun origin for something NO ONE CARES ABOUT.

We also learn that Anakin can speak droid fluently, or so he thinks.

There are lots of things wrong with the prequels, but Revenge of the Sith came across as the most consistent. It was going to be dark. It was going to show us how and why someone became Darth Vader. While I understand the need for drafts and to leave deleted scenes dead, I’m upset this scene exists because it confirms that maybe Lucas missed out on what we loved about Star Wars in the first place.

Star Wars presented an amazing world where anything could happen. The people were cool, the action was exciting, and everything felt special. Seeing Anakin dealing with wifi and then doing a weird joke about whether or not he fluently speaks droid takes me completely out of the universe. The argument back and forth also is such a forced way to put pit them in a Han and Luke banter, and it fails miserably.

It also feels awful that they don’t speak any droid! They interact with these droids every day. These are supposed to be Jedi. This makes them more like discount cowboys.

And it makes me ask about the tone of this movie. Is this an adventure, or a thriller about a man spiraling toward the dark side? How does this scene build character at all? I know I’m going overboard here on a deleted scene but these 19 seconds are indicative of what’s wrong with all three movies.

1. Failure to understand what the audience wants.

3. Useless mythology that takes the magic out of the world