Quo Vadis: ‘Game of Thrones’ With a Conscience

A couple of weeks back I noted that there was an earlier, better television drama that featured far more interesting characters, intrigue and plot twists than George R.R.R.R. Martin’s interminable Game of Thrones.  While I,Claudius is a great series, its one significant weakness is its poor production values.  It can engross you, but it’s hard to be transported through time and space by those cramped sets.

But if one goes back a few decades farther, there is something that gives you spectacles aplenty – and as an added bonus, picks up the story where I, Claudius ends. 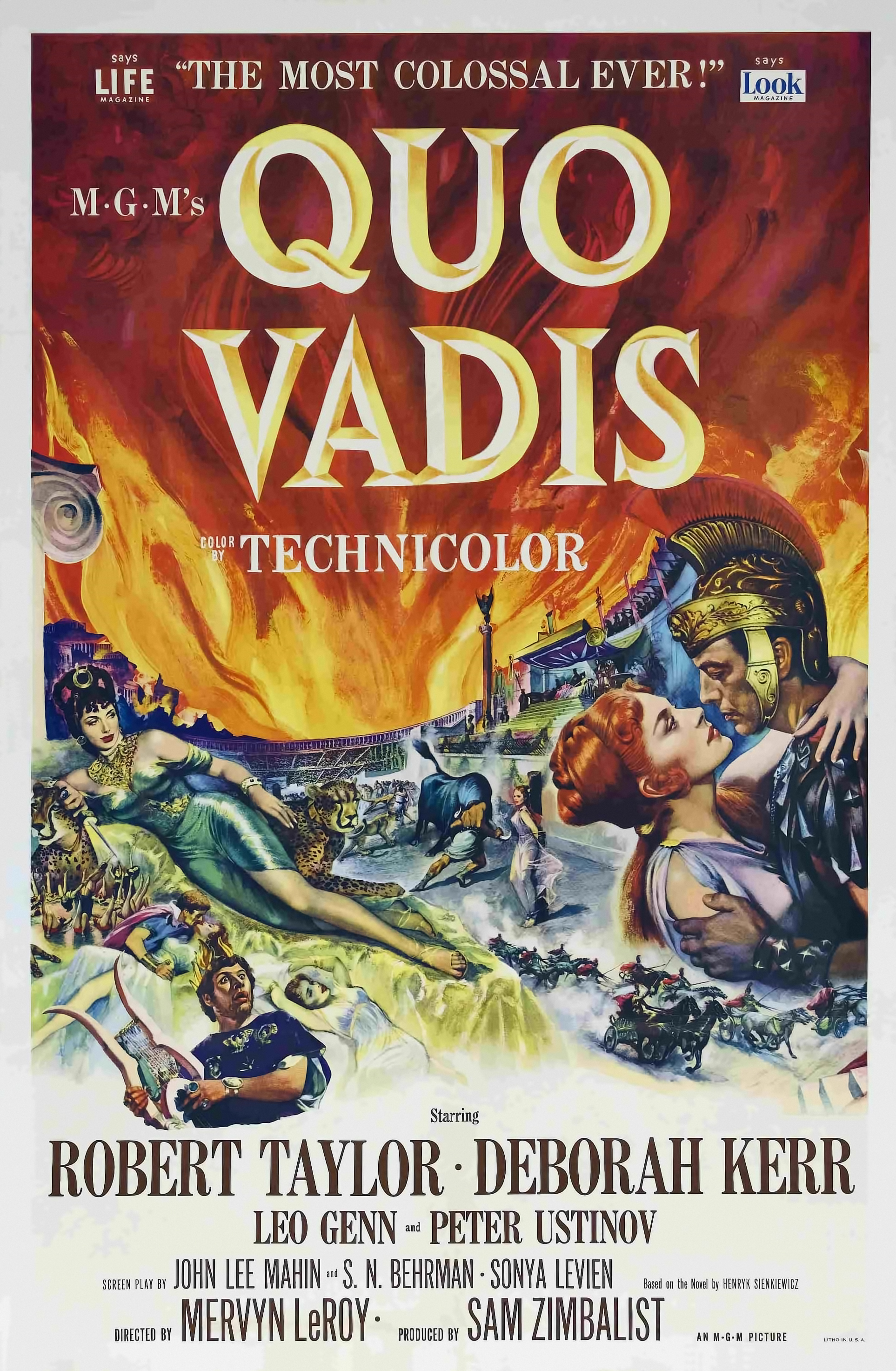 I am referring to Quo Vadis (1951), one of the first big-screen, full-color, sword and toga epics.  Boosted by a bombastic Miklos Rozsa score and a cast of thousands, this was Hollywood’s answer to the looming threat of television.

Quo Vadis was the beginning of a great run of historical epics, each more ambitious and sprawling than the ones preceding it, culminating in Cleopatra, which is still the most expensive movie ever made.

The props and costumes in Quo Vadis aren’t as polished or ornate as the later films, but everything feels suitably Roman – and decadent.

Bad Guys and Good Guys – What a Concept!

Quo Vadis tells the story of the fall of the Roman Emperor Nero and rise of Christianity.  As such, it provides a stark contrast – pitting the might and cruelty of the pagans against the vastly outnumbered early Christians.

Where it differs from Game of Thrones and other tales of intrigue is its examination of life on the bottom of society as well as at the top. To the poor and enslaved, the real question is where they can obtain bread, not which deviant megalomaniac sits on the throne.

This gets back to my problem with superheroes: who cares if the good guys win if everyone got killed by collateral damage?

Besides, when you get down to it, there are no ‘good guys’ in Game of Thrones, just a collection of anti-heroes pursuing their own agendas.  In their lust for power, they’re wrecking the very realm they would rule and making the ultimate triumph of the Ice Zombies that much more likely.

There’s something to be said in illustrating how a ruling class can expose the whole nation to disaster through its own struggles for power, but that story’s been told (and acted out) countless times.  If one has the ability to go to a fantastic realm of dragons and wizard-like weirdos, why not add a new element, such as someone who might actually hesitate at committing incest or killing their parents?

To put it another way, watching awful people doing awful things to each other is self-limiting in the kind of stories that can be told. Quo Vadis, by contrast, takes the issue of moral people in an immoral world head-on.  Is faith worth dying for?  Is mercy a virtue, or a sign of weakness?

The movie may seem a bit preachy at times, that’s largely because we live in an age where moral piety is a punch line. It says something that unironic statements of faith and forgiveness strike us as corny.

The main story is a romance between Roman General Marcus Vinicius (Robert Taylor) and the secretly Christian slave girl Lygia (Debora Kerr), but Peter Ustinov’s portrayal of the Emperor Nero steals the show.

He’s alternately comical and terrifying, veering between awful poetry and demands for death.  His court is full of similar characters, from his lustful wife Poppea (Patricia Laffan) to the amoral Praetorian Guard commander Tigellinus (Ralph Truman).  She doesn’t look at all dangerous, am I right? 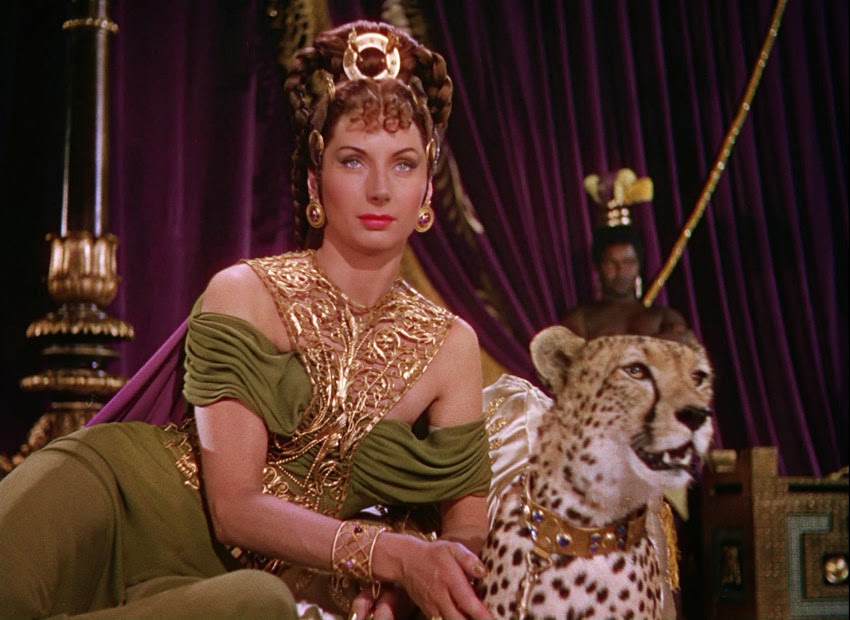 While I gave Peter Ustinov a lot of praise, I really like Deborah Kerr in this (okay, I like her in everything).

Leo Genn does a great job as Nero’s lead courtier Petronius, deftly steering the Emperor away from his more homicidal impulses and safeguarding his own life in the process.  In Nero’s court, concert etiquette is a dangerous business.

I should say a word about Robert Taylor.  He does a good job of playing an otherwise honorable soldier with an appetite for attractive slave girls and who slowly, grudgingly sees the virtue of the “slave religion” that even Nero’s fury can’t wipe out. To put it another way, it’s easy to see Nero as Joffrey or Poppea as Circea, but who in Westeros can be compared to Peter?  Arguably the most admired character in the whole series is Arya Stark and she’s just a highly-motivated serial killer.  One can argue her victims deserve it, but so does everyone else in the show.

There is no higher morality in Westeros, just a question of who holds the sword over whom.

Don’t Make Any Other Plans

With a nearly three-hour playing time, this isn’t a film to be watched as a lark.  Its pacing takes time to unfold, which may be difficult for Generation ADHD. The secret to watching these older epics is to look at them as a miniseries rather than a film to be sat through.  Most of them have intermissions, so one can approach them as one would binge-watch a modern television show.

The payoff scene is arguably the burning of Rome, and while it may pale compared to colossal effects created since then, it’s important to remember that there’s no CGI here, just some camera tricks, a few matte paintings and lots and lots of extras.

Quo Vadis is a reminder that there was a time when quality acting and a good story was just as important as creating a memorable spectacle.  It also demonstrated how to contrast decadence with virtue – something contemporary Hollywood would rather not do.