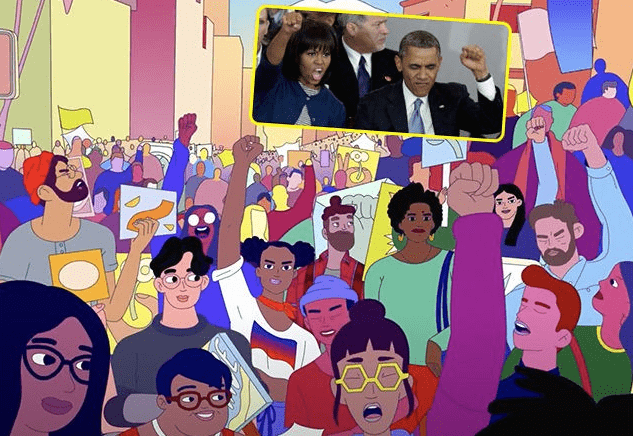 We the People on Netflix is a ten-part animated series created by Barack and Michelle Obama that aims to “reframe” how youngsters think about the United States government, American history, and civic involvement. The greatest thing I can say about this flimsy civics course is that each episode is only five minutes long. The series combines psychedelic animation with quickly forgettable tunes to teach children about citizenship, voting, taxes, and activism. The the musical is provided by outspoken progressive artists Lin-Manuel Miranda, Andra Day, Janelle Monae, and Bebe Rexha.

We The People | Official Trailer | Netflix

Netflix, which produced the show as part of a deal with the Obamas, described it as “an exuberant call to action for everyone to rethink civics as a living, breathing thing” — which sounds eerily similar to the left’s argument for mandatory vaccinations, packing the Supreme Court, and generally curtailing constitutionally protected freedoms.

However, the show is frequently too thin to cause much outrage. The woke signifiers come across as forced and necessary. Almost everyone in this cartoon world is a member of a racial minority. The recurrent image of a raised fist alluded to Black Lives Matter without actually mentioning it. Chris Nee, the show’s creator (who also created the LGBTQ propaganda kids show ‘Doc McStuffins), occasionally slips in veiled barbs at former President Donald Trump.

Michelle and I are excited to share our latest show from Higher Ground: We The People. Some of our favorite artists got together with amazing animators to remix civics—and the result is a lot better than what we had in school. Check it out on @Netflix this July 4. pic.twitter.com/PlsSyq5pgk

We the People ultimately serves little purpose beyond being a shallow commercial for the Obamas and their third term in the White House. The judicial branch episode, performed by Andra Day, ends up being a laundry list of Obama’s Supreme Court victories, including the homosexual marriage ruling in 2015. The last episode includes a reading by poet Amanda Gorman, who delivered remarks at Joe Biden’s inauguration.

So what is the real purpose of We the People? Young children are unlikely to understand the show’s lysergic animation, which appears to be an effort at counter-culture coolness. Anyone beyond the age of ten will find the show insultingly simplistic, except of course Obama sycophants, Netflix executives and the show’s pop music performers, who are all congratulating themselves.