A Review of Netflix’s Early Christmas Turkey: The Witcher

Although not without a few incidental pleasures, Netflix’s new Game of Thrones wannabe is a mess.

A unholy mash-up of Seventh Son, The Last Witch Hunter, Uwe Boll’s In the Name of the King, Warcraft, little-seen BBC2 series Krod Mondoon and The Flaming Sword of Fire and Your Highness – with an added touch of Stardust, The Witcher doesn’t really know what it wants to be.

Star Henry Cavill’s decision to play the role with a laryngitis-inflected mumble renders much of his admittedly execrable dialogue inaudible, whilst other characters deliver streams of generic fantasy gibberish: 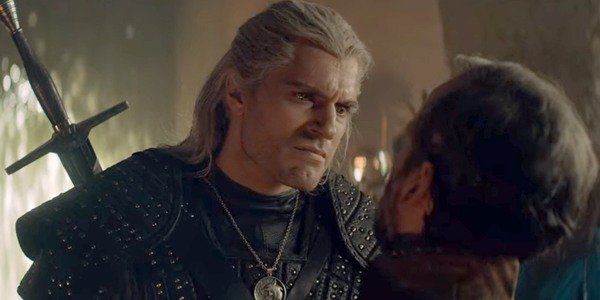 Cavill’s not helped by the decision to sport a wig last modeled by 80s/90s icon Fabio and shoulder pads on loan from the estate of the late Klaus Nomi.

There is a level of self-awareness, albeit clunky, with Cavill’s tiresome bard-sidekick Jaskier (Joey Batey) at one point saying:

One can only hope that he suffers a similar fate to GoT‘s  equally annoying minstrel Marillion:

Interesting to note the brief presence of Julian Rhind-Tutt as ovary-removing image consultant Giltine, as there now appears to be an industry-wide compact to cast him in fantasy movies and series, witness appearances in Stardust, Merlin, Your Highness, The Bastard Executioner and Britannia.

Effects are OK, but we’ve seen it all before, with one monster bearing a distinct resemblance Carnival Row‘s Darkasher, whilst the dragon Borch (Hot Fuzz‘s Ron Cook) clearly harks back to Sean Connery’s Draco in 1996’s Dragonheart.

The obligatory Elves are in evidence, slightly less ethereal than than their LOTR counterparts, but checking the list with pointy ears, air of entitlement and an ‘up yours’ love of nature.

And, as said, plenty of flesh on display for those who have yet to master the Google-Machine.

And lastly, for readers in the UK and fans of Britbox in the US, Anya Chalotra’s Yennefer of Vengerberg (what is it with the hookey names?), who before her makeover by Giltine, looks to be channelling Julie Walters’ Mrs Overall from the spoof soap Acorn Antiques (Victoria Wood: As Seen On TV):

The producers don’t seem to mind the negative criticism though, so I hope you won’t either.

Many people have sweetly written me, upset about the #Witcher reviews. Know this:

Who do I care about? “Professional” critics who watched one episode and skipped ahead? Or REAL fans who watched all eight in one day, and are starting their rewatch?