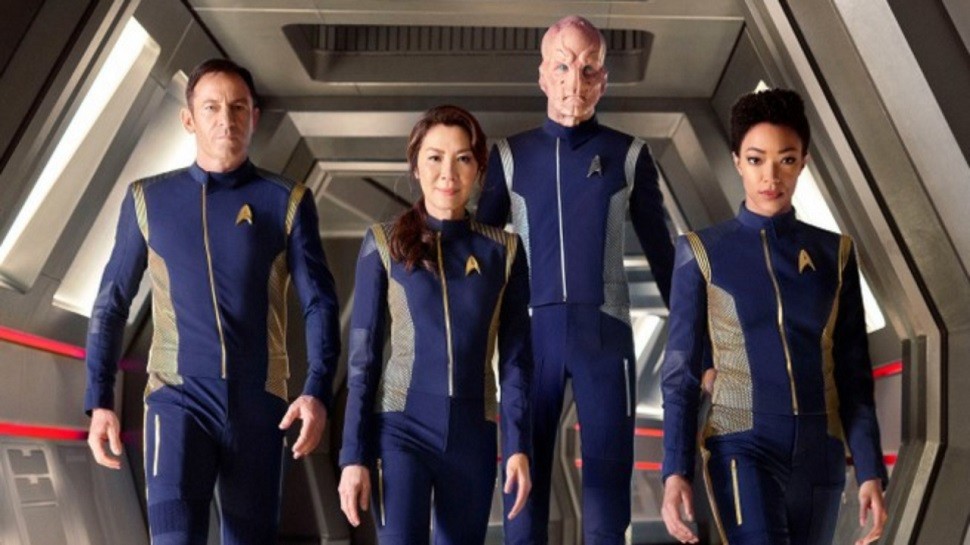 Star Trek: Discovery is about to go through another huge change-up, with CBS confirming that the current showrunners, Gretchen Berg and Aaron Harberts, are being replaced. Of course, these are the showrunners that replaced Bryan Fuller during the final episodes of the first season of ST:D. The ousted showrunners are being replaced by the series’ current executive producer, Alex Kurtzman, who previously wrote the first two rebooted J.J. Abrams helmed Star Trek movies.

Here’s more from The Hollywood Reporter.

“We’ve made some producer changes at Star Trek: Discovery. The series continues under the creative vision and leadership of executive producer and co-creator Alex Kurtzman. Discovery remains on course for season two in 2019 with new and continuing stories that build on its successful premiere season,” producers CBS Television Studios said Thursday in a statement.

Sources say the decision to oust Berg and Harberts was based not on the creative but instead for leadership and operational issues. Production on Discovery’s first five episodes of season two are near completion, with Kurtzman likely taking over for episode six and beyond. Berg and Harberts, who were longtime collaborators with original showrunner Fuller, will likely still be credited on the episodes they oversaw. Sources say the budget for the season two premiere ballooned, with the overages expected to come out of subsequent episodes from Discovery’s sophomore run. Insiders also stress that Berg and Harberts became increasingly abusive to the Discovery writing staff, with Harberts said to have leaned across the writers room table while shouting an expletive at a member of the show’s staff. Multiple writers are said to have been uncomfortable working on the series and had threatened to file a complaint with human resources or quit the series altogether before informing Kurtzman of the issues surrounding Berg and Harberts. After hearing rumors of HR complaints, Harberts is said to have threatened the staff to keep concerns with the production an internal matter.

Sources tell THR that Discovery is nearing what has been characterized as a planned production hiatus after episode five, which will allow Kurtzman time to regroup the show’s writing staff. Production is not expected to be impacted by the showrunner change. In another departure for season two of Star Trek, THR has learned that executive producer Akiva Goldsman did not return to Discovery after serving as Kurtzman’s right-hand man during its freshman run. Goldsman was brought in to help build the world of Discovery, but the veteran producer, who directed the season one finale, is said to have had a management style and personality that clashed with the writing staff.

The budget for the season two premiere reportedly ballooned past expectations, meaning that episodes six and beyond will likely suffer as a result. The show is taking a production hiatus while Alex Kurtzman regroups with the writing staff. Kurtzman had already taken the helm for the sci-fi drama’s season-two premiere, directing the debut episode of the new season, which began production in April. Kurtzman also co-created “Discovery” with Bryan Fuller and played an active role in season one, working with showrunners and fellow exec producers Gretchen J. Berg and Aaron Harberts, who have now been replaced by Kurtzman.

Prior to the first season’s launch in the fall of 2016, writer/producer Bryan Fuller was the original showrunner until he was unceremoniously pushed out by CBS two months before the series premiered. Fuller had been the creative force behind Pushing Daisies and Hannibal and had actually gotten his start in broadcast television working on the Star Trek series Deep Space Nine as well as Voyager. Fuller initially pitched ST:D as an anthology series that would span a different era of Star Trek’s history each season, but CBS thought his ideas were too ambitious and compromised with a serialized, self-contained season set a decade before the adventures of Kirk and Spock. Fuller reportedly clashed with CBS over the show’s budget, design, and release date, further straining the relationship. Fuller wanted a slightly-upgraded version of the original series’ uniforms and set designs, while CBS wanted something much more modern. Tensions between CBS and Fuller eventually became untenable, and he was asked to leave the project where he then focused his efforts on Starz’ American Gods.

No air date has yet been scheduled for the premiere, but Discovery season two is still expected to be released in 2019, picking up where the season-one finale left off. After bringing the Federation-Klingon war to a non-violent conclusion, the crew of the USS Discovery set off from Earth to Vulcan, but — spoiler alert — stopped along the way to answer a distress call from the USS Enterprise. The finale’s closing shot sets up a likely meeting between the Discovery’s Cmdr. Michael Burnham and Capt. Christopher Pike, who commanded the Enterprise prior to the tenure of James T. Kirk.