‘Memba When Shills Claimed “The Last Jedi Was Review Bombed”?

Before Rotten Tomatoes bent the knee and changed the way movie critic ratings were calculated on their website, many pundits (read Disney Shills)  would claim that any film they felt should be accepted by movie goers could never get a low audience score unless it was trolls “review bombing” the movie on the popular website. These included Captain Marvel, Ghostbusters (2016), and of course, The Last Jedi.

However, even fewer audience members seem to have tallied up a much lower score for The Last Jedi than for The Force Awakens. This seems to completely undermine the whole “The Last Jedi was review bombed” narrative that the media was trying to sell (or the narrative they were being told to repeat). 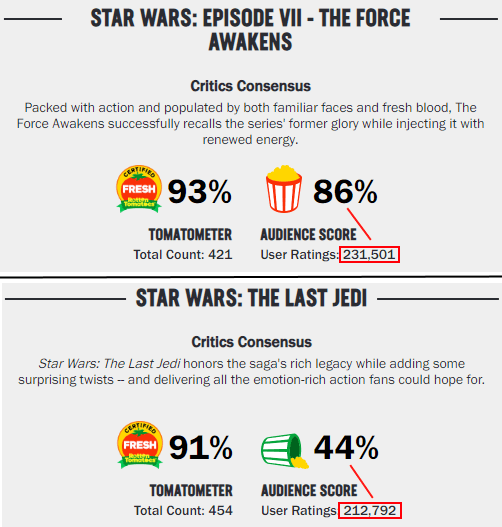 Thanks to DramaExpertHS for the tip