by Chris Braly
|
Movie review aggregate website, Rotten Tomatoes has confirmed that bots did not affect the ‘audience score’ for the latest Star Wars franchise film ‘Star Wars: The Last Jedi‘. The movie has garnered a ‘certified fresh’ rating based on high-praise from professional critics, but a severely low audience score had caused many to suggest that it must be a hacker adjusting the score using bots.

To add fuel to this conspiracy theory Down With Disney’s Treatment of Franchises and its Fanboys claimed responsibility for the poor Rotten Tomatoes Audience Score for ‘The Last Jedi,’ claiming to have “rigged” the score using bots to turn fans against Disney.

Not so, says Rotten Tomatoes explaining to Variety that no one has fudged those numbers:

“For ‘Star Wars: The Last Jedi,’ we have seen an uptick in people posting written user reviews, as fans are very passionate about this movie and the franchise. The authenticity of our critic and user scores is very important to Rotten Tomatoes and as a course of regular business, we have a team of security, network, social and database experts who closely monitor our platforms.”

The film’s lower performance has also caught the attention of The Hollywood Reporter who is reporting that merchandise retailers are trying to gain a sense of “what the steady state” of product for the Star Wars franchise is.

Star Wars: The Last Jedi is a hit, but The Force may not be as strong for Disney when it comes to merchandise sales this year. Panjiva, a data company that tracks the giant shipping containers that arrive at U.S. ports, says 6,587 of them with Star Wars gear were shipped in the seven months leading up to The Last Jedi, but that’s down 47% from the seven months leading to Rogue One in 2016 and off 56% from the same time period ahead of The Force Awakens in 2015. Once the containers land in the U.S., these products go to Walmart, Amazon.com and every other retailer.

And some disappointed fans of the Disney-Lucasfilm movie have even begun a petition to Have Disney strike Star Wars Episode VIII from the official canon which had collected over 55,000 signatures at the time of this writing. A wasted effort if there ever was one. Disney doesn’t admit to making mistakes.

Here is a comparison to how each of the prequel films in the saga and the most recent two films compare on Rotten Tomatoes. Strange that all of the near-universally loathed prequel films fare better than “The Last Jedi.” In fact, even though there are far less user ratings for The Last Jedi than the other films (as of this writing), it has the overall WORST Audience Score of all the last six Star Wars-related films. 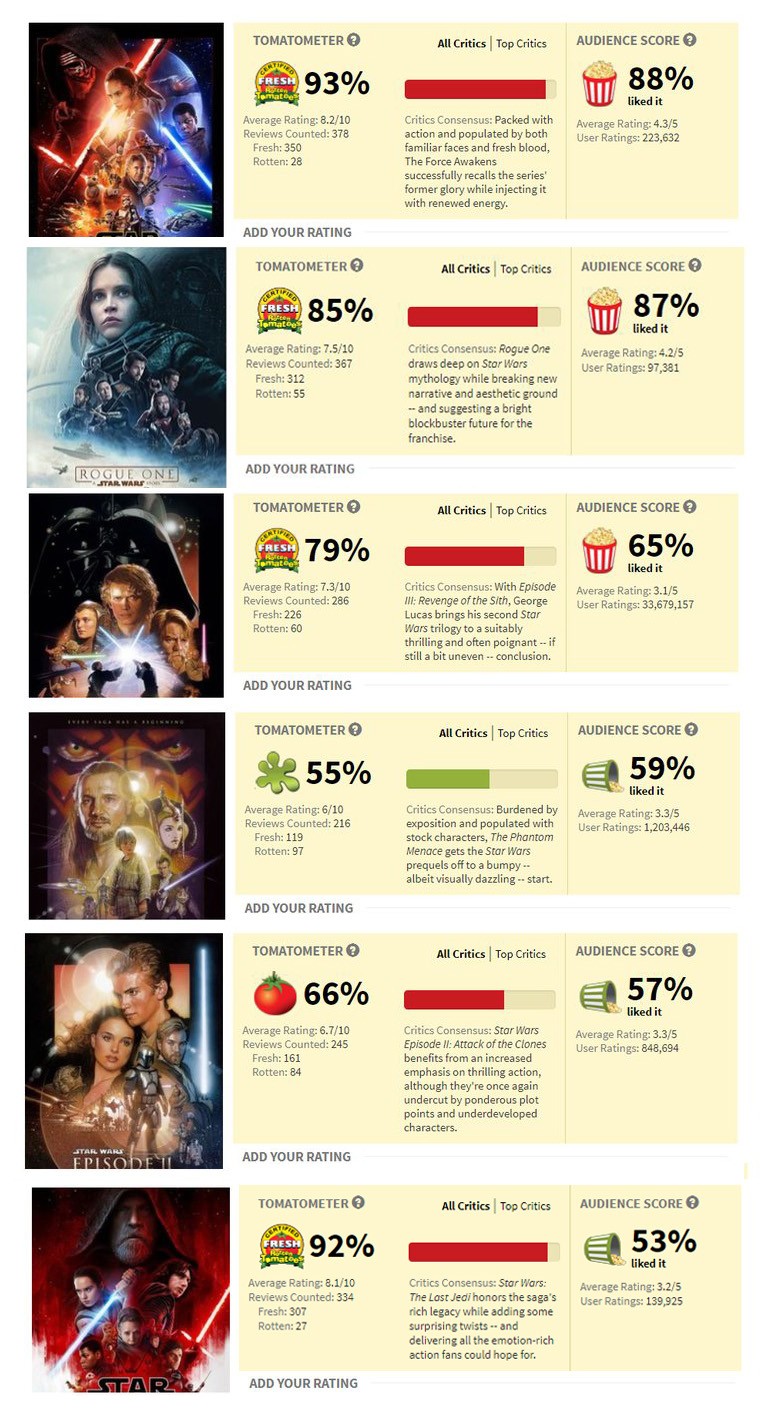 This image was assembled as of December 22, 2017
While sales of the merchandise may not stack up compared with those of Christmas past, and the ticket sales also seem to be doing less than its predecessors, the movie will still do massive business with some analysts estimating that The Last Jedi will generate a domestic box office of $785 million, which is only off a respectable 16% from the $937 million generated by The Force Awakens. However, with both ticket sales off AND merchandise off by such wide margins, could that Rotten Tomatoes 35% disparity between The Force Awakens and The Last Jedi Audience Scores actually mean something? Could the ticket buying and toy buying audience REALLY not like the movie as much as the critics?

Will the Force be strong with this film?