How Star Wars The Empire Strikes Back Connects to Doctor Who 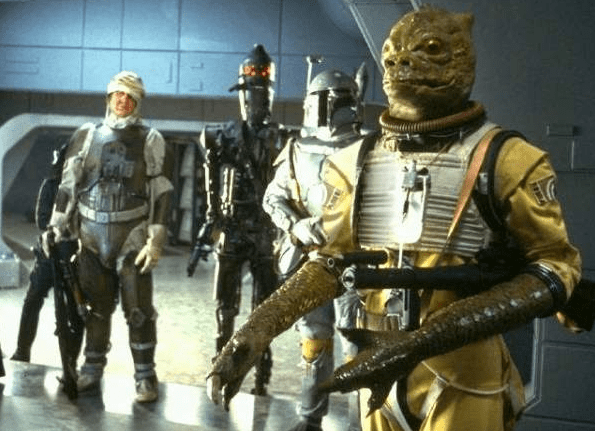 One of the unique things about Star Wars compared to other science fiction franchises has to do with George Lucas’ decision to make everything look old and used. You see the years of use in every spaceship and blaster. This decision may have been part of what lead to an odd connection between Star Wars and another beloved sci-fi series, Doctor Who.

The Trandoshan bounty hunter Bossk didn’t get much screen time in the Empire Strikes Back, but the character’s popularity has continued to grow in animated series, novels, comics and video games. He has an amazing look, the brown scaly skin, jagged teeth and yellow jumpsuit. That suit is the connection between the two franchises. A slightly modified High-Altitude Windak Pressure Suit previously used by the Royal Air Force was the basis for the outfit and it originally appeared in the 1966 episode of Doctor Who called The Tenth Planet. Both Doctor Who and Star Wars used the same prop house in the U.K. so bringing the more than a decade old suit out of storage made a lot of sense for the feel of the franchise.

Like with Empire Strikes Back, the Tenth Planet arc ended on a down mood as it was the final appearance of the 1st Doctor, William Hartnell as he regenerated into Patrick Troughton, something fans didn’t know was even possible for the character. Something to be said for recycling.