Game of Woke: House of the Dragon has Less Nudity & More Androgynous Characters HBO’s immensely popular fantasy series Game Of Thrones quickly gained a reputation for its excessive nudity and bloodlust when it debuted more than ten years ago. The eight-season epic by George R. R. Martin featured violent sex scenes, tales of rape and incest, and even bloody representations of child murder from the very first episodes.

However, 11 years later, things have certainly changed, even in Westeros. Hollywood insiders are claiming that House Of The Dragon, the eagerly awaited prequel to the original series, has gone completely, and utterly woke.

Gone are the risqué scenes of full-frontal nudity and violence that shocked and delighted audiences in equal measure. In their place are non-binary actors, a new dynasty of powerful black characters and roles that are ‘sexually fluid’ and ‘androgynous’.

In this new era, set 200 years before Game Of Thrones, it is two women who battle for the show’s Iron Throne – the seat of power that controls the disparate regions of Westeros.

And rather than subjecting female actresses to sexual violence, new post-MeToo storylines are instead designed to showcase the ‘power’ of women by featuring gory scenes of childbirth.

The original show was produced prior to the MeToo era, but according to the Daily Mail a Hollywood insider connected to the new series, not only is there is much less sex than GoT presented, but it is handled quite differently. And to deflect racism concerns, the production is hyper-aware that while only a few black characters appeared in Game of Thrones, one of them was executed in chains. 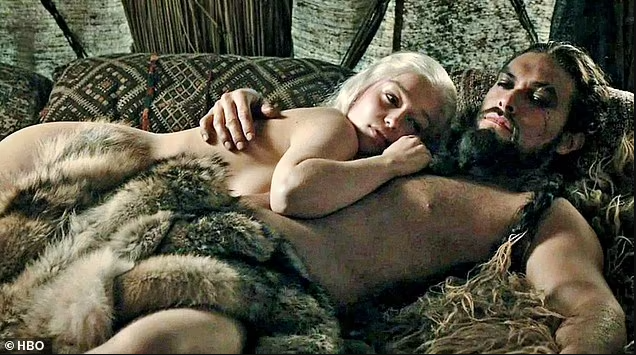 Based on Martin’s book Fire & Blood, House Of The Dragon, which premieres on Sky Atlantic on August 22, depicts the tale of the House of Targaryen and the savage and bloody civil conflict known as the Dance of the Dragons. Princess Rhaenyra Targaryen, who is one of the contenders for the throne and is portrayed by British actress Emma D’Arcy, who identifies as non-binary and uses the pronouns they/them in real life, is one of the contenders. The character, according to D’Arcy, is “terrified of being locked into motherhood.”

‘I’m a non-binary person.” says D’Arcy. “I’ve always found myself both pulled and repelled by masculine and feminine identity and I think that plays out truthfully here.’

Prince Daemon Targaryen, who is portrayed by former Doctor Who Matt Smith, is her uncle and is characterized as having “fluid” and “weirdly androgynous” sexuality. In fact, the Hollywood source claims that “men terrible, women good” is one of the film’s central themes in House Of The Dragon. Sounds terrible. Alicent Hightower, Princess Rhaenyra’s stepmother, is played by British actress Olivia Cooke. She says: “There are times when Emma is on one stage and I’m on the other, and we’re both surrounded by male characters acting ridiculous.” And we are aware that if all these men would leave and it were just the two of us, the realm would be in order.

In addition to the feminist themes, the production will also emphasize the “violence” in childbirth, and further explains to the Mail that there is significantly less nastiness and sexual violence than in the first series.

Will Game of Thrones fans embrace this new “woke” series, or reject it? It airs just two weeks before Amazon launches its  Lord Of The Rings series The Rings Of Power – the most expensive TV show ever made. Will either show connect with fantasy fans?