Exactly What Version of Jean-Luc Picard is Returning?

After seven seasons and four movies captaining the U.S.S. Enterprise as Jean-Luc Picard, Patrick Stewart disengaged from Starfleet after Star Trek: Nemesis (2002), but now he was set to return to the role that had made him famous. In recent years, he had publicly admitted that he no further interest in playing the captain of the U.S.S. Enterprise, after it became clear to him that he had been type-cast. That’s when he decided to permanently retire the character, and proceeded to turn down any please from studios to fans to put on the Starfleet uniform again.

But in mid-August of last year, I was overjoyed to see that one of my favorite Star Trek characters would be returning in his own series. Stewart shocked geekdom when he announced that Captain Jean-Luc Picard would be making his return in an all-new Star Trek series for CBS All-Access.

It is an unexpected but delightful surprise to find myself excited and invigorated to be returning to Jean-Luc Picard and to explore new dimensions within him. Read my full statement in the photo. #StarTrek @cbsallaccess Photo: @shervinfoto pic.twitter.com/8Ynuj3RBNm

In the video from last August, Patrick Stewart says of his return:

“He may not be a captain anymore. He may not be the Jean-Luc that you recognize and know so well. It may be a very different individual. Someone who has been changed by his experiences. 20 years will have passed… We have no scripts as yet, we’re just talking, talking, talking storylines. It will be, I promise you, I guarantee it, something very, very different, but it will come to you with the same passion and determination and love of the material and love of our followers and our fans exactly as we had it before.”

I didn’t give it much thought at the time, because honestly I had always felt that ST:TNG was quite liberal in its politics. Why should this iteration be any different. But would this CBS All Access iteration of Picard be that different? Earlier this month, Executive producer Alex Kurtzman, who has guided the franchise (and a few of its feature films), and who took over as showrunner on season two, did not one but two interviews where he discussed the project which is well into pre-production.

On Variety’s TV Take podcast, Alex Kurtzman discussed Patrick Stewart’s pre-signing on challenge to them to create a remarkably different show that still honors the past:

What we had done is shown [Patrick Stewart] in the writing that we at least wanted to try for something that was different and that he was coming to the table with people that not only loved him, but loved the character. From there we started building it very much together. Then began the process of saying, “What do we want to do and how is this different? How are we honoring Picard? How are we honoring the fans? How are we honoring The Next Generation?” And this kind of amazing thing has emerged and it will feel really different than Discovery, but that is to me a great thing and necessary thing.

Kurtzman then discussed approach to the ST:TNG fans’ expectations:

People will come into [the Picard] show with expectations and we will meet some of them and we will fail in other ways. Because there is no way for everybody to love everything. Part of the beauty of Star Trek is people debate it and have different points of view about it. Very rarely does every Trekkie or Trekker agree on everything and that is sort of the point. It asks its fans to engage in a debate and conversation. Because something is so meaningful to people and has endured for over 50 years, we couldn’t possibly please everybody and that’s okay. But where you really fall short and people get really angry, is if they feel you are somehow disrespecting the franchise or throwing a kind of darkness into a character that they did not feel that way about. If you are mutating the character into something that doesn’t feel like what they love, that’s hard. We are always debating where that line is. (emphasis added)

In his recent interview with Entertainment Weekly, Kurtzman offered more details on how the Picard series will differ from Star Trek: Discovery:

It’s an extremely different rhythm than Discovery. Discovery is a bullet. Picard is a very contemplative show. It will find a balance between the speed of Discovery and the nature of what Next Gen was, but I believe it will have its own rhythm. Without revealing too much about it, people have so many questions about Picard and what happened to him, and the idea we get to take time to answer those questions in the wake of the many, many things he’s had to deal with in Next Gen is really exciting. ‘More grounded’ is not the right way to put it, because season 2 of Discovery is also grounded. It will feel more… real-world? If that’s the right way to put it.

Finally, Kurtzman gave this proclamation in the EW interview which is startling:

I began to feel Star Trek was more necessary than ever. Where Star Wars is about a galaxy far, far away, Star Trek is about the best of what we can become. And right now, we need to know that. Now, more than ever, need to know as the Vulcans say, live in a world of infinite diversity and infinite combinations, and that our best selves will emerge and there is hope for a crew like Discovery and a future that hold the people on that ship to exist. And suddenly it became a mission, where I was like I don’t want to do anything that isn’t meaningful anymore. I don’t want to do anything that isn’t about putting a message into the world that is necessary and positive. And I fell love with Trek in a different way. I already loved it, but it suddenly became the only thing I wanted to do and the only story I wanted to tell. I have come to a place in my life where if it doesn’t have nutritional value, meaning if it doesn’t have something important to say and something meaningful about the state of the world and people, I don’t care. I am not going to spend my time on that anymore. (emphasis added)

Space.com had this to say about how this new iteration would be a part of the Kevlin timeline:

In an interview with The Hollywood Reporter, Alex Kurtzman — the showrunner on “Star Trek: Discovery,” who was rumored to also be among the executive producers of this new series — said Picard will be living a very different life than the one he knew on the Enterprise. Apparently, this is thanks to a traumatic and life-changing calamity dating all the way back to the events of J.J. Abrams’ “Star Trek” movie, a film Kurtzman co-wrote. (The timeline of the new movies is known as the “Kelvin timeline,” referring to the USS Kelvin flown by Kirk’s father and destroyed in the first of those reboot movies.)

The destruction of the Romulan homeworld in 2009’s film “Star Trek,” Kurtzman said, was a defining event in Picard’s career, one that sets up the role Stewart will play on the still-untitled new show.

“Picard’s life was radically altered by the dissolution of the Romulan Empire,” Kurtzman explained. He added that Stewart himself loved the show’s new premise once he saw how different his reprised role would be.

“He [Stewart] threw down an amazing gauntlet and said, ‘If we do this, I want it to be so different, I want it to be both what people remember but also not what they’re expecting at all. Otherwise, why do it?'” Kurtzman said.

According to Kurtzman, after reading the creative team’s 34-page pitch for the new show, Stewart “walked into the room and he had a huge smile on his face and said, ‘This is wonderful.’ He knew if he was going to go back to Picard, it needed to be for the greatest reason ever.”

Details about the new series are scarce, but it already appears as if Picard won’t be overseeing the personal and political problems facing his crew and the cosmos in the style of “The Next Generation.” Kurtzman did add, however, that “anything could happen,” when asked whether some of the old “TNG” cast would show up on the new show for a cameo or two.

Quite how the Kelvin timeline will be woven into the prime timeline still baffles us. 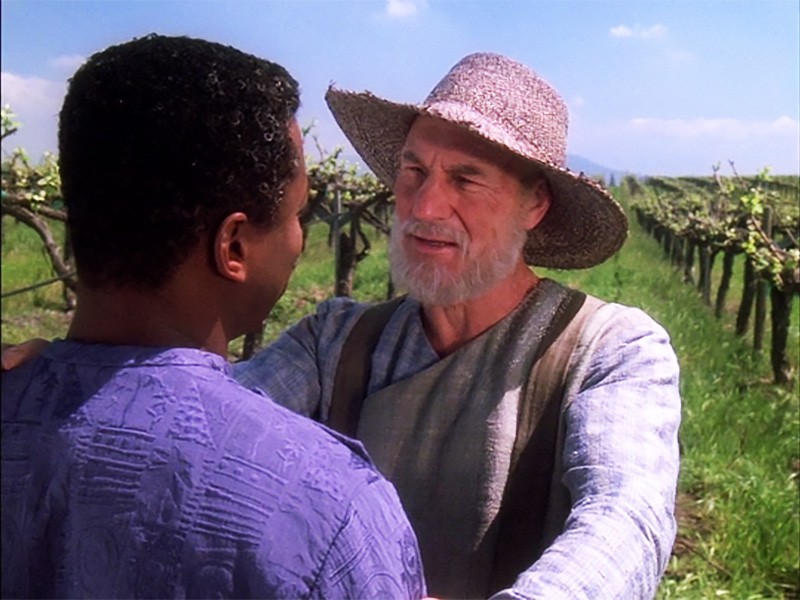 I’m just wondering if this version of Picard will respect the timeline put forth in the series finale of TNG “All Good Things” (which took place 25 years in the future of that episode). Will he be retired from Starfleet and working in a vineyard? Or could this be the Picard from the Mirror Universe? Or will it simply be an even more “woke” version than we’ve already gotten in past iterations. I’m hearing this weekend that there are discussions going on about the Picard series doing a crossover with Star Trek Discovery as well. Not sure what I think about that.

Star Trek: The Next Generation – All Good Things Blu-ray Trailer